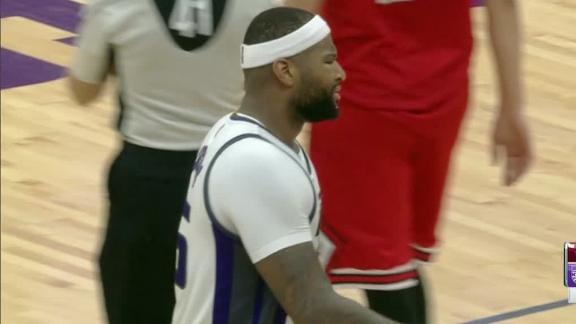 DeMarcus Cousins is facing a one-game suspension after picking up his 16th technical foul of the season in the Sacramento Kings' 112-107 loss to the Chicago Bulls.

Cousins, who leads the league in technical fouls, collected two on Monday night. The second technical foul came with 1.1 seconds remaining in the game.

An accumulation of 16 technical fouls leads to an automatic suspension.

"It's going to be difficult," Kings point guard Darren Collisonsaid. "But we've been playing with our back against the wall all year. WithRudy [Gay] being out, Garrett [Temple], Omri [Casspi], So next man up, somebody has to step up. No excuses. We got to go out there and produce and try to win the game, but we definitely got to play with a little better pace, like we did in the end of the game this game."

Cousins, who is not expected to be traded before the deadline, led the NBA in technical fouls last season as well, with 17. He left the arena Monday night without talking to the media.

The second came when a furious Cousins thought he was fouled on a 3-point attempt.

Cousins finished with 18 points, 14 rebounds and 5 assists as Sacramento's rally from a huge deficit fell short.

If both technicals are upheld by league review, Cousins will miss Wednesday's game against Boston.

Sacramento coach Dave Joerger wasn't sure whether the Kings will have Cousins on Wednesday.