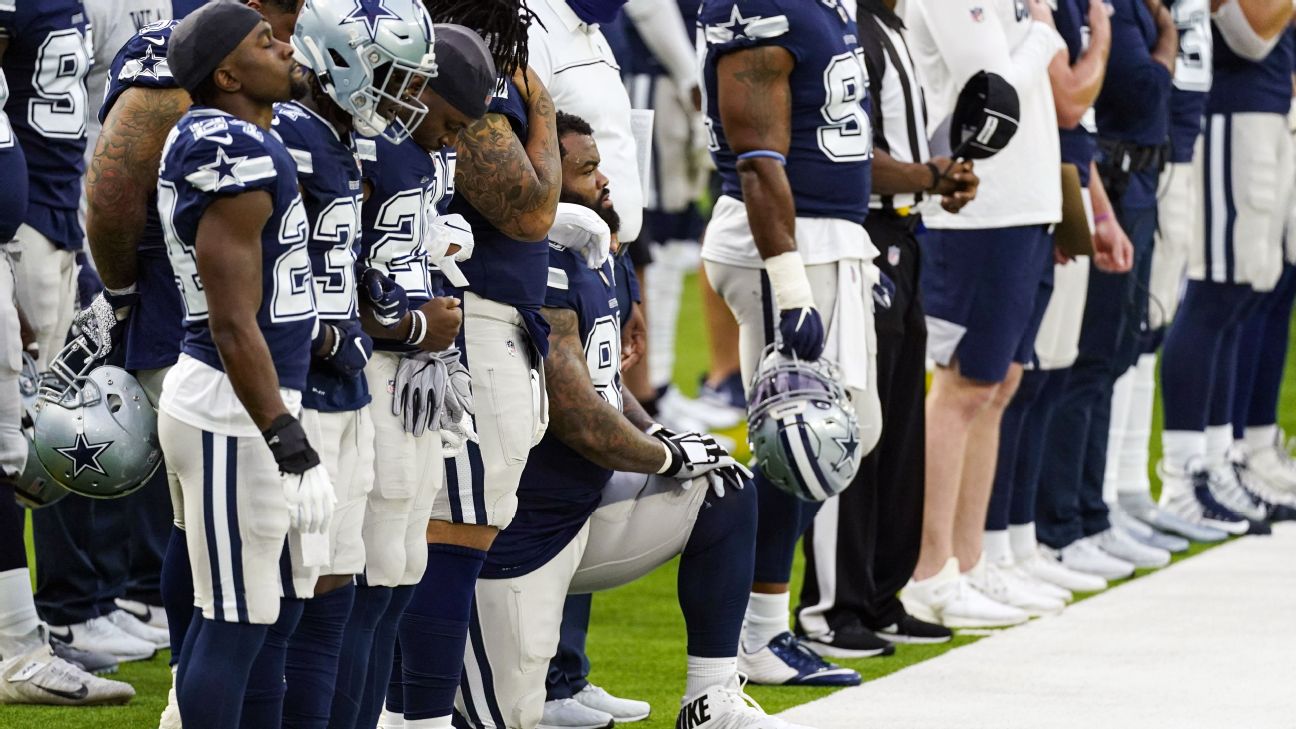 Dallas Cowboys defensive tackle Dontari Poe was the only member of the team to kneel Sunday night during the performance of the national anthem at SoFi Stadium.

Poe, who signed with the Cowboys as a free agent in the offseason, has said repeatedly that he planned to kneel during the anthem to protest police brutality and systemic racism. He is the first Cowboys player ever to do so.


Dallas owner Jerry Jones has been one of the league's most outspoken voices against kneeling but acknowledged in recent weeks that he would not issue a policy prohibiting it.

Across the field, more than a dozen Rams players and coaches kneeled.

Earlier Sunday, seven NFL teams remained in the locker room during the presentation of the national anthem, a stark visual reminder of the league's pivot toward social justice issues. Elsewhere, many players and some coaches kneeled, sat on the bench and/or raised their fists when on the field for the anthem.

For Week 1, the league directed every home game to play two songs during the pregame: "Lift Ev'ry Voice and Sing" and "The Star Spangled Banner." The league does not require teams to be on the field during the anthem presentation, nor does it prohibit kneeling.

Of the 24 teams that kicked off for the early or late afternoon, these seven were in the locker room for "The Star Spangled Banner:" The Green Bay Packers, Jacksonville Jaguars, Philadelphia Eagles, Buffalo Bills, Miami Dolphins, New York Jets and Arizona Cardinals. Meanwhile, New Orleans Saints safety Malcolm Jenkins remained inside the locker room during the anthem while the rest of the team was on the field.


Indianapolis Colts coach Frank Reich was the most prominent coach to kneel. In a statement, the Colts said:

"Our intent is to bring attention to the issue of systemic racism and the injustice inherit therein. We also wanted to demonstrate a symbolic gesture of how we believe meaningful change happens. TO BE CLEAR -- we were not protesting the flag, the anthem, or the men and women who wear the uniform. The timing of this action is meant to highlight that the presence, power, and oppression of racism remains inconsistent with the unity and freedoms of what it means to be an American."

At other NFL stadiums:

The Minnesota Vikings silenced the Gjallarhorn they normally sound before kickoff of every home game. In a statement, the team said it did so out of respect for the family of George Floyd, whose death by police in Minneapolis in May prompted a national outcry against police brutality and systemic racism. Four police officers have been charged and are awaiting trial. Members of Floyd's family were at U.S. Bank Stadium on Sunday as guests of the team.

Jaguars players released a statement explaining why they decided to remain in the locker room for both pregame songs. They said they are made up of "many differences" but are "unified by our humanity, our respect for each other, our support of one another, and our common goals as teammates." They decided to remain in the locker room in order to "continue raising awareness of racial injustice against the Black community." They added: "We understand that not everyone will agree with our position and demonstration, however we hope that all will seek to understand the reason for it. We all want the same thing: equality and justice."


Players from the Seattle Seahawks and Atlanta Falcons took a knee after the kickoff of their game at Mercedes-Benz Stadium.

A majority of Ravens players kneeled or sat on the bench as the national anthem played, including Lamar Jackson, who took a knee. Coach John Harbaugh stood. Gus Edwards, Willie Snead and Miles Boykin interlocked arms. During warm-ups, Ravens players wore black T-shirts. The front read: "Injustice against one of us is injustice against all of us." On the back, it had the words: "End Racism." When "Lift Ev'ry Voice and Sing" played, Ravens players, coaches and owner Steve Bisciotti stood in the end zone side by side. Marlon Humphrey and Matthew Judon took knees.

The Packers issued this statement about their decision to be in the locker room during the national anthem: "The Green Bay Packers respect the national anthem and United States flag and all that they represent, including the right to express ourselves. We decided as a team to remain in the locker room during the playing of the national anthem and 'Lift Every Voice and Sing' so as to not distract from our message that we stand united for social justice and racial equality. This is part of our continued call on our leaders to engage in meaningful dialogue that results in change. We feel it is important for all of us to participate in these difficult conversations with humility and be open to different perspectives."