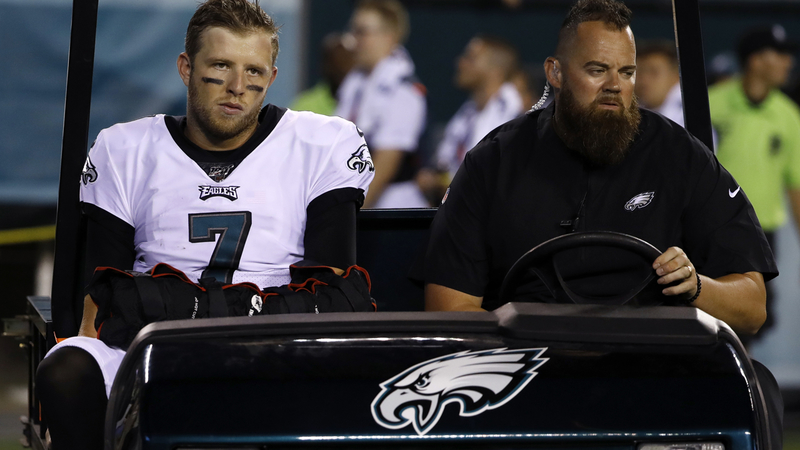 Sudfeld left the sideline on a cart after injuring his left arm on a late hit in the second quarter of Philadelphia's game against Tennessee.

Sudfeld fell backward after a personal foul by Isaiah Mack and immediately went to the sideline. He was wearing an air cast on the cart ride to the locker room.

Nate Sudfeld with his left arm in an air cast being carted off the field. They have NOBODY else behind him to backup Carson. #Eagles@NateSudfeld pic.twitter.com/fLTnffkCy1

"Nate had x-rays at halftime, and we found out that there is a break in his left wrist, which is his non-throwing wrist. He will have surgery in the morning to repair it," head coach Doug Pederson said.

Sudfeld is not expected to miss the entire season.

"It is not season ending, so we are excited about that. I will probably have a better update for you on Saturday once he gets out of surgery tomorrow," Pederson said.

Eagles NOT bringing in another QB right now@6abc #eagles pic.twitter.com/cp23JTdFR4

Before getting hurt, Sudfeld was 10 for 18 for 177 yards and a beautiful 75-yard touchdown pass to Marken Michel.

Behind Sudfeld, the Eagles really don't have anyone that can be counted on to be the backup quarterback, especially given Wentz's injury history. The third-stringer is Cody Kessler, who was released by Jacksonville in the offseason. They'd likely have to go out and sign a veteran to take Sudfeld's place.

However, Pederson said they are sticking with it who they got for now.

"Right now, we are going to continue with who we have. We are comfortable with Cody (Kessler) and we will get Clayton (Thorson) more work. Again, with Nate, this is not a season-ending injury, so we are excited about that," Pederson said.

But Pederson was pressed on the possibility of bringing someone new to fill that QB role and how much time it would take for that person to be ready for the season.

"If that were the case, day-by-day just getting him in the playbook and getting him caught up, but we are not at that point yet," Pederson said.