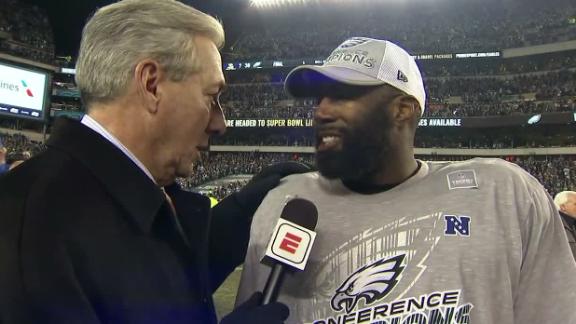 The Philadelphia Eagles are the biggest Super Bowl underdogs since 2009.

The Westgate SuperBook in Las Vegas on Sunday installed the Eagles as 5.5-point underdogs to the New England Patriotsfor Super Bowl LII.

Other sportsbooks went higher. The Wynn opened at New England minus-6.5, and Caesars Palace and Station Casinos each made the Patriots minus-6.

William Hill's Nevada book went a touch lower, with New England opening as a 5-point favorite. The Super Bowl over/under was set at 47.5.

The Patriots will be looking for their second straight Super Bowl title and third in the past four seasons when they take on the Eagles on Feb. 4 at U.S. Bank Stadium in Minneapolis.

The betting favorite has won 33 of the previous 51 Super Bowls.

Philadelphia is the largest Super Bowl underdog since the Arizona Cardinals were seven-point underdogs to the Pittsburgh Steelers in Super Bowl XLIII.

New England reached its 10th Super Bowl with a comeback win over the Jacksonville Jaguars in the AFC Championship Game. New England erased a 10-point deficit with nine minutes to play and beat the Jaguars 24-20.

The Eagles hammered the Minnesota Vikings in the NFC Championship Game to get back to the Super Bowl for the third time and first since facing the Patriots in Super Bowl XXXIX.

The Patriots kicked off the season as the consensus Super Bowl favorites with odds around 5-2 and, after a few early hiccups, remained the team to beat at Las Vegas sportsbooks for the majority of the season.

The Eagles were 40-1 to win the Super Bowl at the Westgate SuperBook in September. They got off to a 10-2 start but lost quarterback Carson Wentz to a knee injury in early December. Backup quarterback Nick Foles stepped in and led the Eagles to back-to-back wins in the playoffs. Philadelphia was an underdog in each of its playoff games, against the Atlanta Falcons and Sunday against the Vikings.

The Westgate SuperBook said that if Wentz were healthy, the odds for the Super Bowl would be pick 'em.

Since Nevada Gaming Control began tracking wagering on the Super Bowl in 1991, the state's regulated sportsbooks have come out ahead in 25 of 27 games. The books are up a net $173.6 million on the Super Bowl during that span, with their only two losses coming in 2008 (Patriots-New York Giants) and 1995 (San Francisco 49ers-San Diego Chargers).

Jenkins on SB: 'We ain't just going for a field trip'
Malcolm Jenkins tells Sal Paolantonio that the Eagles had confidence since the first snap and says that no matter who is on the other side of the field the Eagles are "destined" to win Super Bowl LII.
Report a correction or typo
Related topics:
sportsespnnflnews chalkgamblingphiladelphia eaglesnew england patriotsbettingsuper bowllii
Copyright © 2020 ESPN Internet Ventures. All rights reserved.
More Videos
From CNN Newsource affiliates
TOP STORIES