Embiid calls Dudley 'a nobody' after Butler fracas 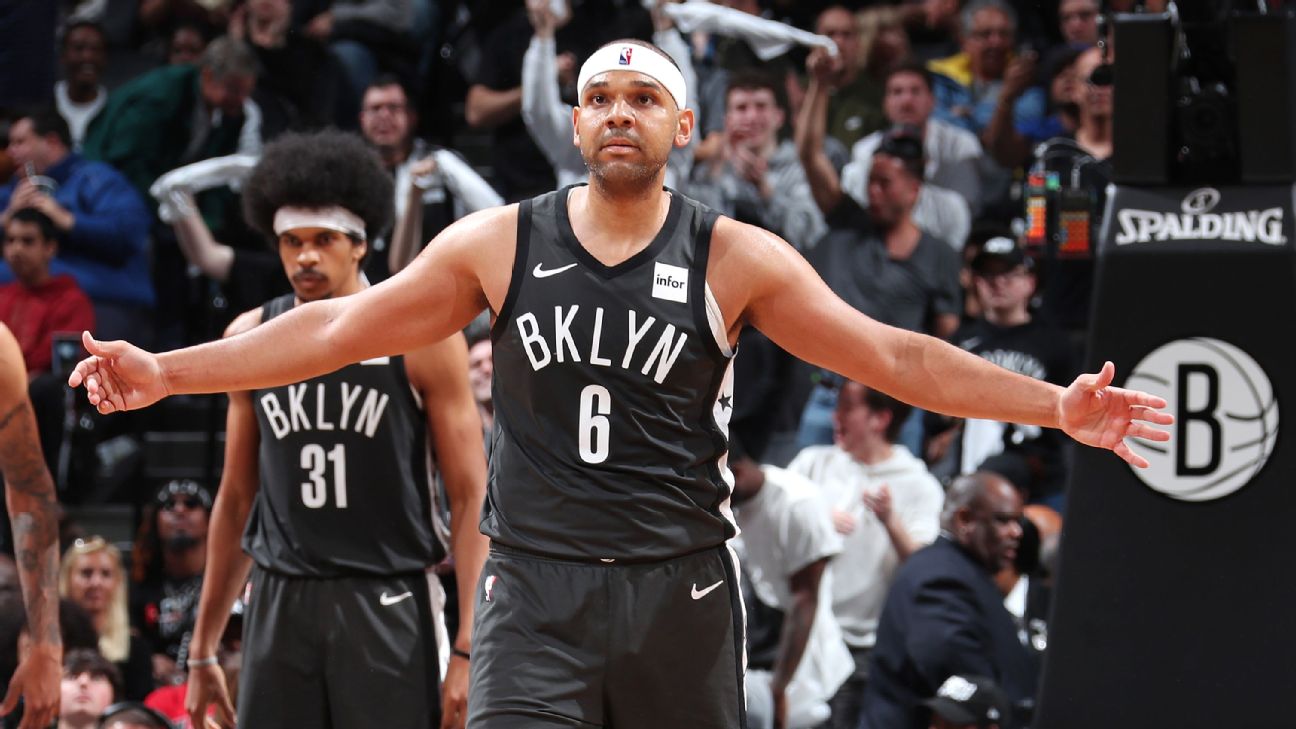 NEW YORK -- Jimmy Butler and Jared Dudley were both ejected from the Philadelphia 76ers' 112-108 Game 4 victory over the Brooklyn Nets on Saturday after Dudley shoved Joel Embiid and officials had to separate players from the two teams.

Dudley rushed at Embiid with 7 minutes, 42 seconds remaining in the third quarter and Brooklyn leading 67-61 after the Sixers center fouled Jarrett Allen near the basket, bringing the 6-foot-11 Allen to the floor. In the ensuing fracas, Dudley and Ben Simmons spilled into the courtside seats along the baseline at Barclays Center.

After play was stopped for several minutes to sort out the penalties, Embiid was assessed a flagrant foul 1, and both Dudley and Butler -- who swung his left forearm at Dudley -- were called for technical fouls and ejected from the game.

Dudley, who'd already made his mark on the first-round NBA playoff series with his play in Game 1 at the stretch-5 and his remarks going into Game 3, when he called Simmons an "average" player in the half court, was mocked by Embiid after Game 4.

"First of all, he's a nobody," Embiid told TNT of Dudley. "And when opponents try to do stuff like that, that's just to get us out of the game. Especially, I'm too valuable for my team. That's why I didn't react. I did not do anything and I did not think that was a flagrant foul because I played the ball, too. But in that type of situation I just got to stay composed and be mature."

"Embiid's foul was ruled a flagrant 1 because there was a windup with unnecessary contact that we didn't deem to be excessive," Malloy said.

Embiid and Butler shared a postgame news conference and broke into a bit of a comedy act when looking back on the sequence.

"First of all, we knew it was coming," Embiid said of Dudley's instigation.

"Yeah," Butler chimed in. "We definitely thought it was coming. I don't be paying attention to him too much. I just don't think you should run up on anybody like that ..."

"Especially because the foul was actually all ball," Embiid said, interrupting.

Embiid said he planned to pay the fine associated with Butler's ejection.

"It was great to see that you play with guys that care about you, that have your back and I don't have to do anything else but go back and have their back too and that's by dominating and trying to get us a win," said Embiid, who finished with 31 points, 16 rebounds, 7 assists, 6 blocks and 2 steals.

After the Dudley and Butler ejections, the Sixers rallied to outscore the Nets 51-41 and took a 3-1 lead in the best-of-seven series.

"I think that there was a deeper connection after Jimmy was ejected and offensively and defensively you could see [it]," Sixers coach Brett Brown said.

"I don't know what to say," Atkinson said. "No comment on that. You'd love to play these games in full force."

It was Dudley's fourth career ejection (including the playoffs) and his first this season. He hadn't even received a technical foul this season before Saturday. And Dudley became the fourth player this season to be ejected after a run-in with Embiid, joining Marcus Smart, Andre Drummond and Eric Bledsoe.

"It's just the heat of the game and because of my physicality, people are compelled to retaliate and they've all been ejected," Embiid said. "I know these guys are going to go at me because they want me to retaliate so I got to be the mature one on the court and just stay cool and not react. Today I know I could have reacted but I felt like my teammates and my team needed me more than they needed Jared Dudley so I just got to stay cool and mature and do my job."

Malloy also explained why Dudley and Butler were ejected.

"Dudley and Butler were ejected for their role as escalators, from taking a situation that was under control and escalating it to a heightened situation," he told the pool reporter.

Malloy added that Simmons and D'Angelo Russell, who were both involved in the hullabaloo that followed Dudley's shove, were not penalized because they served as peacemakers. While Atkinson avoided offering an opinion on the scuffle, Russell found fault with the officiating not just in Game 4 but the entire series.

"I'm going to answer this as succinctly as I can without going at the refs, that's not my intentions," Russell said. "But, I mean, we've seen hard plays, we've seen hard fouls go against Jarrett Allen the last few games. This happened to be from the same player, so for Jared Dudley to step up and react like that, I thought it was necessary. Because we're getting the bottom end of that ...

"So for one of our players to be on the ground after every hard play like that, that's not what it's going to be. So, like I said, if those guys aren't seeing it from our perspective, we see it from that perspective so we're going to handle it in our own ways."

Atkinson did take issue with the no-call made with 4.8 seconds left, however, when Simmons stole the ball from Allen, thwarting a potential game-tying attempt by the Nets.

"So the big point of emphasis this year was the wrapping, wrapping a player when he rolls to the rim, wrapping around the waist. You guys can judge for yourselves if you watch the clip. But there was a clear wrap byTobias Harrison the roll and I'm just disappointed," Atkinson said.

"That's a point of emphasis from day one at the coaches meeting, how they're going to really emphasize that, beginning of the game and end of the game, and all season. So how that, all of a sudden, doesn't become a foul on a wrap, I just don't understand. I looked at the clip 10 times. There's a clear wrap. You guys can decide for yourselves."

In Game 2, Embiid elbowed Allen in the face, drawing a flagrant foul 1 after an officials' review. Afterward, Embiid chuckled during his postgame news conference while apologizing for the play. After later seeing the replay, Embiid admitted he should have been ejected.

Embiid now has two flagrant foul points in the playoffs. Once a player reaches four in the postseason, he receives an automatic one-game suspension. 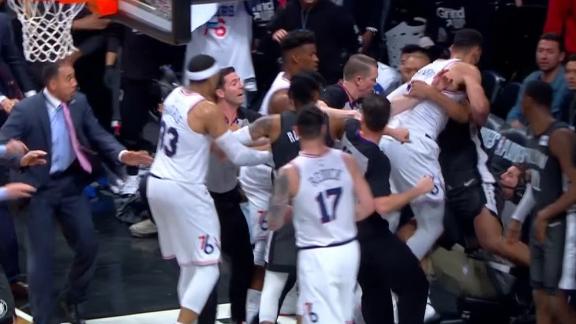 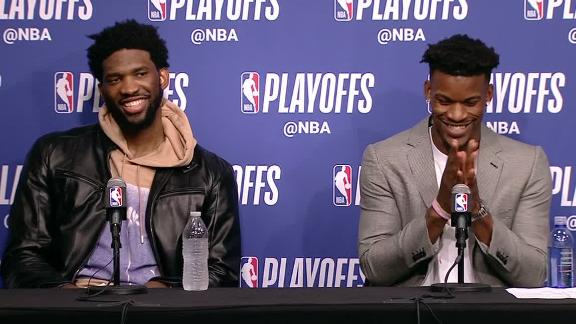 Butler and Embiid have each other's back
Jimmy Butler say if someone runs up on Joel Embiid again, he will do the same thing and Joel adds he will pay the fine. Butler was ejected Game 4. 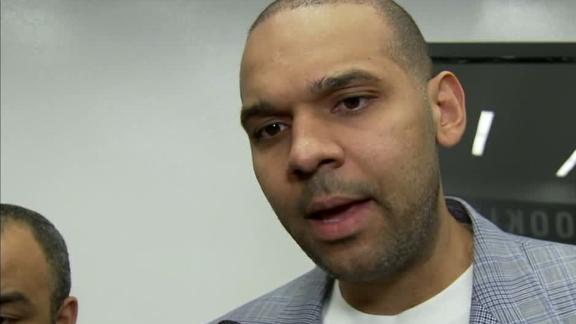 Dudley on Embiid: 'If anything, I should've got him worse'
Jared Dudley has no regrets when it comes to the exchange that he and Joel Embiid had in Game 4. 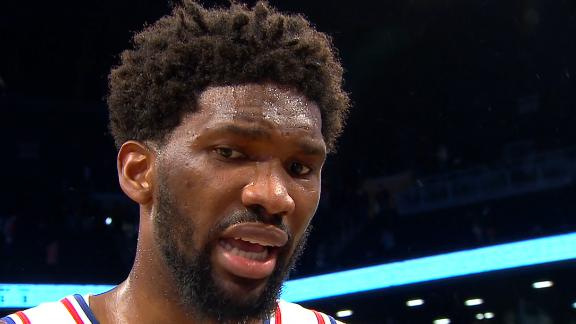