Everything we know and don't know about Ben Simmons, the Philadelphia 76ers and their trade impasse 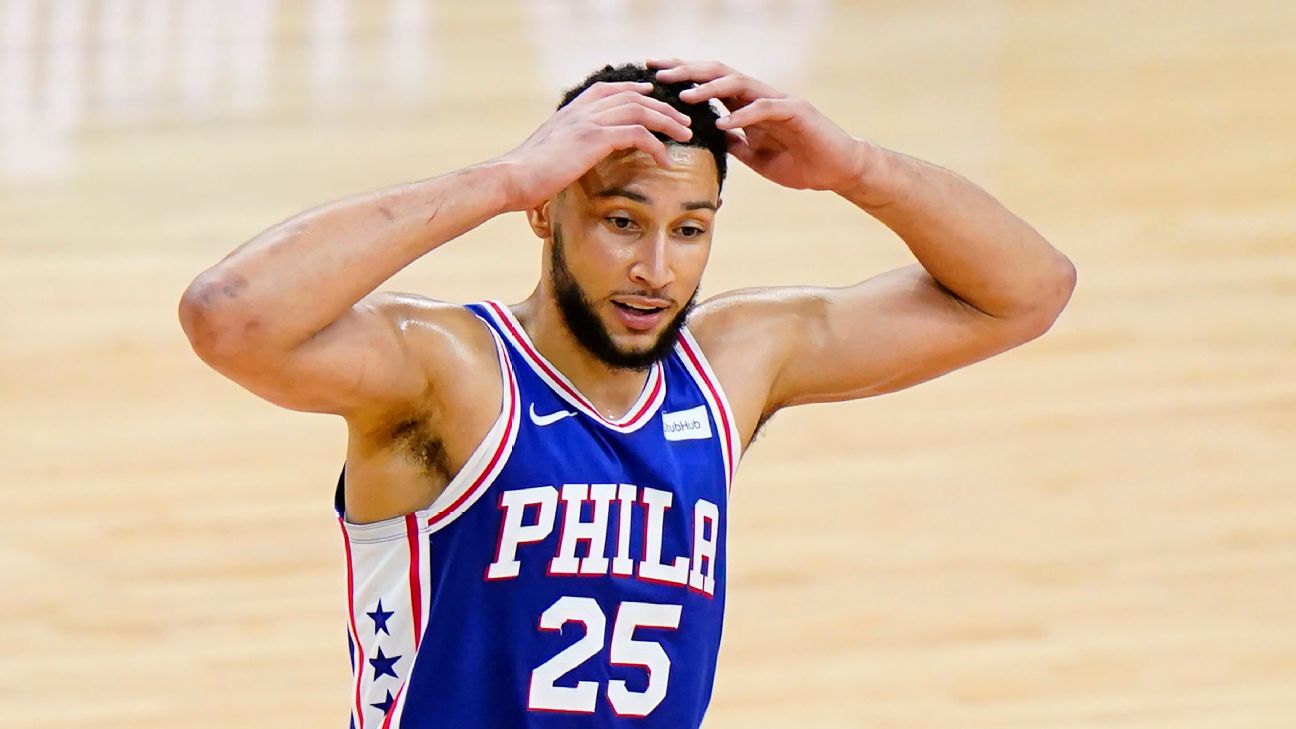 Ben Simmons and the Philadelphia 76ers remain at an impasse, with no movement since Philadelphia was eliminated in the second round of the playoffs by the Atlanta Hawks in June.

Simmons, who is under contract for four more seasons, would like to be traded. The 76ers would like to trade him, but only for a return they believe is commensurate with how they value the 25-year-old, three-time All-Star and two-time All-Defense selection.


So far, a deal hasn't happened. Until it does, both sides will remain locked in a stalemate.

Sources previously told ESPN's Adrian Wojnarowski that Simmons had sought a trade out of Philadelphia and that Simmons' agent, Klutch Sports CEO Rich Paul, and Sixers management had met early in the offseason. Simmons has yet to report to camp ahead of the team's first preseason game Monday against the Toronto Raptors.

"We're in it for the long haul," a source close to Simmons told ESPN's Ramona Shelburne.

All of that adds up to Philadelphia -- a city that has grown accustomed to drama surrounding its basketball team -- being home to the league's stickiest situation ahead of the 2021-22 season.

Preseason has started. Where does the Simmons situation stand as of Monday?

The 76ers traveled north of the border to take on the Raptors Monday night. Simmons, as expected, didn't join them, continuing his holdout that officially began when he didn't report to training camp last week.

But while Philadelphia placed the 25% of Simmons' salary that he was owed Friday -- roughly $8.25 million -- into an escrow account, Monday marks the first day he will begin to see a permanent financial hit for his decision to stay away from his team.

Beginning with Monday's game against the Raptors, the Sixers plan to fine Simmons for every game -- both preseason and regular season -- that he is away from the team. For each game missed, Philadelphia will deduct roughly $360,000 from that $8.25 million placed in escrow.

The fine falls under the agreement spelled out between the NBA and the National Basketball Players Association in the Health and Safety Protocols, where a player who is unable to play due to "reasonable cause" will have his compensation for this season reduced by 1/91.6th (about 1.09%) of the player's base compensation for each game he misses.

This is not money Simmons can get back in the event Philadelphia eventually accedes to his wish to be traded. The team that chooses to trade for him cannot agree to pay Simmons the money he is owed in fines from Philadelphia. Instead, Simmons would only be able to get some, or all, of the fine money back by coming to a settlement with the 76ers, who would have no incentive to do so.

How did we get here?

From the moment Simmons passed out of a wide-open dunk to Matisse Thybulle with under four minutes to go in Game 7 of the Eastern Conference semifinals against the Hawks, league insiders have believed his exit from Philadelphia was inevitable.

After staunchly defending Simmons all season, Sixers coach Doc Rivers was asked after that Game 7 loss if Simmons could be a championship-level point guard. "I don't know the answer to that," Rivers said.

Part of the reason Rivers defended Simmons all season was that it was his latest attempt to use his news conferences to boost the confidence of one of his key players -- something he'd had success doing with players like Rajon Rondo with the Boston Celtics and DeAndre Jordan with the LA Clippers.

Not only was Philadelphia still hoping Simmons would become more willing to shoot, but there also was the fact that Simmons' name had been bandied about in James Harden trade talks at the start of the season.

Ultimately, none of it worked, culminating with Simmons passing up that wide-open dunk.


Shortly after that ugly Game 7 loss, and following a discussion between management and Simmons' representation, both sides agreed to look for a trade as the draft and free agency approached. Over the ensuing weeks, the Sixers had talks with numerous teams, sources said, and several made what they believed were legitimate offers.

It became clear the Sixers' asking price for Simmons was steep; Philly was looking for a premium return whether it was a star player, multiple first-round picks or both.

After the transaction season ended in mid-August, owner Joshua Harris and 76ers management flew to Los Angeles to meet with Simmons and agent Rich Paul. The Sixers intended to tell Simmons they couldn't find a deal for him, hoping to put aside differences and enter the season on the same page, sources said.

Simmons, however, was steadfast, telling Harris he didn't want to play for the team again and that if he wasn't traded by the end of the month, he didn't intend to come to training camp, sources said.

The point was made that it wasn't Simmons' responsibility to increase his trade value, and that the Sixers should find the best possible trade and execute it now, rather than wait for a strong start to the season to increase his value.

Simmons hasn't spoken to the team since that meeting, though 76ers president of basketball operations Daryl Morey said he has communicated with his representatives, led by agent Rich Paul, since then.

Why hasn't Simmons been traded yet?

The simple answer? Because Damian Lillard and Bradley Beal aren't available yet.

Morey has proven three things over his long, successful run as an executive: He isn't afraid of awkward situations, he isn't going to make a deal for the sake of making one and he is constantly trying to swing trades for stars.

Like several other teams around the league, the 76ers are closely monitoring the Lillard situation in hopes that he asks out of Portland. Earlier this summer, Lillard said he didn't feel like the Blazers had a championship roster and wanted to see improvements. Portland has had a quiet offseason in terms of free-agent additions.

Until there's any movement there -- or another team comes in with a huge offer for Simmons separately -- it seems likely Simmons will remain on Philadelphia's roster for the foreseeable future.

What are league insiders saying about how Philly is handling this?

A player refusing to report with four years and roughly $150 million remaining on his contract is unprecedented, and has executives from around the league watching it closely to see how Philadelphia handles it.

Multiple executives from other teams have applauded the Sixers' approach, saying it was the only way Philadelphia could've handled it. One said the way Simmons has gone about this is the equivalent of a team going to an aging veteran and saying, "We paid you a lot of money, but now you're not worth it, so we're gonna pay you $10 million instead -- or not at all."

Another exec pointed out that unlike past situations in which a player has held out heading into the season, only to eventually show up, those players were holding out in order to get a new contract. Simmons' case is unique because he is holding out in the hopes of getting paid to play elsewhere.

Have there been recent examples of players under contract not reporting to camp?

The closest is Jimmy Butler in 2018 with the Minnesota Timberwolves. Butler was dissatisfied that his contract was not renegotiated during the offseason and believed not everyone on the roster was aligned to winning. As a result, he implored the organization to trade him.


The Butler situation was different because the Timberwolves gave him permission to miss media day and the early part of training camp while he rehabbed his right knee. When Butler did return to training camp on Oct. 10, he created a storm at his first practice, challenging teammates, coaches and front-office executives.

One of those targets was then-GM Scott Layden. "You f---ing need me, Scott. You can't win without me," Butler reportedly said.

The young Timberwolves team that reached the playoffs the previous year started the season 3-7. After four straight losses, Butler was traded on Nov. 12 to Philadelphia, where he helped Simmons and Embiid reach the second round of the playoffs before losing to the eventual champion Toronto Raptors.

Another example is when the Rockets' James Harden asked for a trade last offseason and missed the first week of training camp as a result of failing to meet the NBA's COVID-19 protocols.

Harden eventually practiced on Dec. 14 but was ruled unavailable for the Rockets' season opener after being spotted at an indoor party without a mask, a violation of the league's health and safety protocols that cost him $50,000. Houston started the season 3-6 before Harden was traded to Brooklyn in mid-January.

Unlike Minnesota and Houston, where Butler and Harden were both their teams' top players, that is not the case in Philadelphia. The 76ers have an MVP candidate in Joel Embiid and a strong nucleus led by Tobias Harris, Seth Curry, Thybulle and Tyrese Maxey.

With or without Simmons, Philadelphia is still a playoff team, although likely not one of the favorites to win the Eastern Conference.

What is Simmons' relationship with Embiid now?

From the moment Simmons and Embiid began playing together in 2017, there have been questions about their on-court fit despite the two of them consistently posting positive net ratings when sharing the court.

Philadelphia's repeated stumbles in the playoffs haven't eased those concerns. And after Embiid spoke to the media following the 76ers' Game 7 loss to the Hawks, the idea of breaking up the stars burst open.

"I'll be honest. I thought the turning point was when we, I don't know how to say it, is when we had an open shot and we made one free throw," Embiid said, not naming Simmons but specifically calling out his passed-up layup opportunity as the reason for Philadelphia's loss.

Embiid addressed the topic during his media day interview at the start of training camp in Camden, New Jersey.

"I didn't call out anybody. I just stated the facts. I'm honest. I can't lie. That's just me," Embiid said. "So I don't have any regrets because I don't feel like I put anybody in a situation where they had to feel bad."

Embiid did, however, say he has regrets about how the situation between Simmons and the team has deteriorated. When asked what he would've said to Simmons if he'd been given the chance to talk to him -- Embiid confirmed he and his teammates attempted to do so, only for Simmons to rebuff them -- Embiid paused for 10 seconds while deciding what to say.

"Honestly, I would probably say I'm disappointed," Embiid said. "I'm disappointed that we're in this situation. ... I'm just disappointed he's not here, because he knows it, too. He knows we can win together."

His tone, however, was markedly different later that week after a report in The Athletic stated Simmons didn't believe he and Embiid could win together. "The situation is disappointing, borderline kind of disrespectful to all the guys that are out here fighting for their lives," Embiid told reporters.

"It was kind of surprising to see. ... We got rid of Jimmy [Butler], which I still think was a mistake, just to make sure [Simmons] needed the ball in his hands. That's the decision they made."

ESPN's Ramona Shelburne and Brian Windhorst contributed to this story. 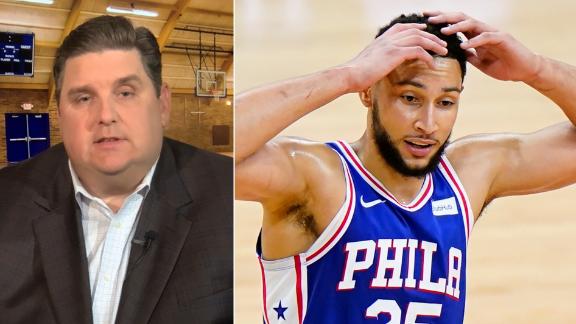