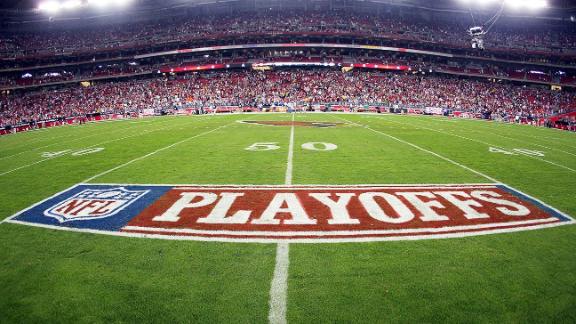 PHOENIX -- Expanded NFL playoffs, once thought to be a near certainty for 2015, appear headed for the back burner once again.

As NFL owners gather here this week for their annual meeting, the consensus seems to be that an expansion of the current 12-team playoff format will happen at some point, but not this year.

Mara said a number of factors are complicating the potential implementation of an expanded playoff field, including the days of the week available for playoff games. The league is trying not to create a conflict between its playoffs and college football's playoffs, and as Mara pointed out, there are weather concerns at that time of year as well.

"It's going to happen at some point," Mara said. "I prefer it the way it is, but I don't feel as strongly about it really maybe as I once did. Because [expansion] is going to happen. One of my concerns about it was when are you going to play those extra games? One of the proposals was playing it on a Monday night. I just think playing on a Monday night in January in northern climates is not the ideal. However, Saturday would be a possibility, and that to me is much more palatable."

The most likely proposal to start would be adding one playoff team in each conference per season, which means the number of teams in each conference that would have first-round byes would drop from two to one, and there would be a total of six playoff games on the first weekend. Had the playoff field been expanded to 14 teams in 2014, the 10-6 Philadelphia Eagles and the 9-7 Houston Texans would have reached the postseason.

Commissioner Roger Goodell discussed the topic, which he said has "a lot of merit from a competitive side," in an interview with The MMQB.com. He said there are several factors that have to be considered, including playing opposite college football's national championship game, when the extra games would take place and the concerns of the league's television partners.

Ticket sales are another issue the NFL must consider, Goodell said.

"We want to advance this postseason policy a little more effectively so that we have confidence," he said. "You know, you could have a situation where a team ends up with two home games at the end of the season and you could end up winning your division and then play three home playoff games. You could have five home games in five weeks at the end of the season and into January. If you have a northern climate, that's a lot to ask of your fans. So we have a lot to balance."