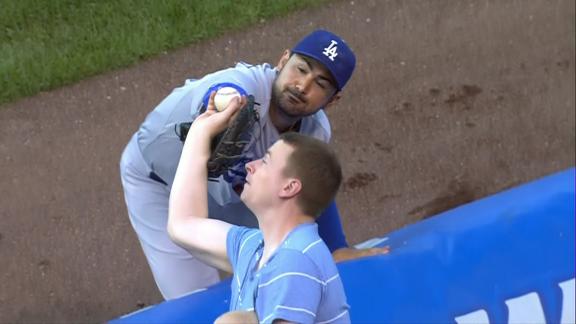 ESPN
By Jon Greenberg
CHICAGO -- Fans catching foul balls have a bit of a tortured history at Wrigley Field, but this time, a fan was celebrated for snagging a foul ball Tuesday night, even though it cost the home team an out.

With one arm around his 7-month-old son, Isaac, who was cradling his bottle, Keith Hartley easily caughtJason Hammel's foul ball down the first-base line in the second inning.

The catch happened just over Dodgers first baseman Adrian Gonzalez's glove, as he ran into the tarp to try for the out.

But after a review, Hammel was called out for fan interference and the inning was over.

Regardless, Hartley's play was an instant hit on television and social media. Who doesn't love a dad catching a ball while holding a baby who's holding a bottle?

"I saw Twitter," he said. "My Twitter is going insane. A friend from work gave us these tickets as a gift, and I probably have 15 emails in the first 10, 15 minutes."

What was going through his head as he went for the ball with his son in tow?

"Baseball is not a new thing to me," he said. "I didn't want it to hit the ledge and hit him, so I wanted to make first contact, I think."

More importantly, what was going through wife Kari's head?

"I was a little bit nervous, a little bit scared he was going to drop the baby," she said. "Fortunately he held on tight to both the ball and Isaac, so we were OK."

Gonzalez said after the game, a 1-0 Cubs walk-off win, that he would have made the catch had Hartley not reached over the tarp and that he immediately asked umpire Jerry Meals to clarify the ruling on the play.

Meals told the Dodgers first baseman he didn't think Hartley reached over the tarp, but a replay showed he clearly did.

"[Gonzalez] didn't say anything [to me]," Hartley said. "I think I turned around too quickly for him to interact with me. Hopefully he's not too angry. He is on my fantasy team. I want to keep him happy."

Gonzalez, for his part, said he didn't think Hartley should have been ejected for interfering with a ball in play.

As for the degree of difficulty, Gonzalez said, "It would have been more impressive if the baby would have caught it."

Cubs manager Joe Maddon commended Hartley's one-handed effort, saying afterward, "That was outstanding. You worry about the baby, of course, but he looked like he had it under control. It looked like he did it before. That was really a great play, a great play. There was some levity involved for the entire audience."

Hammel also was impressed by Hartley's concentration. When told the baby was holding a bottle, too, he said, "That's even more amazing. Eye-opener. Best play of the night, other thanAddison [Russell]'s stab at second on a line drive byJoc [Pederson]."

Dodgers manager Don Mattingly, who has an infant son of his own at home, said he didn't notice Hartley was clutching a child until he saw the replay.

"Could I have done it? Absolutely," Mattingly said.

Asked whether the play was reminiscent of another infamous display of Chicago fan interference, Hammel said, "Flashes of [Steve] Bartman? Not near the importance. Best play of the night."

Hartley, a 29-year-old Andersonville resident who works in finance, actually wasn't in his seat when he ranged over to make the play. He put his two friends in the seats closer to the plate to protect Isaac, who was at his second game, from any fast liners.

"It turned out these guys weren't here and it was my duty to catch the ball," he said. 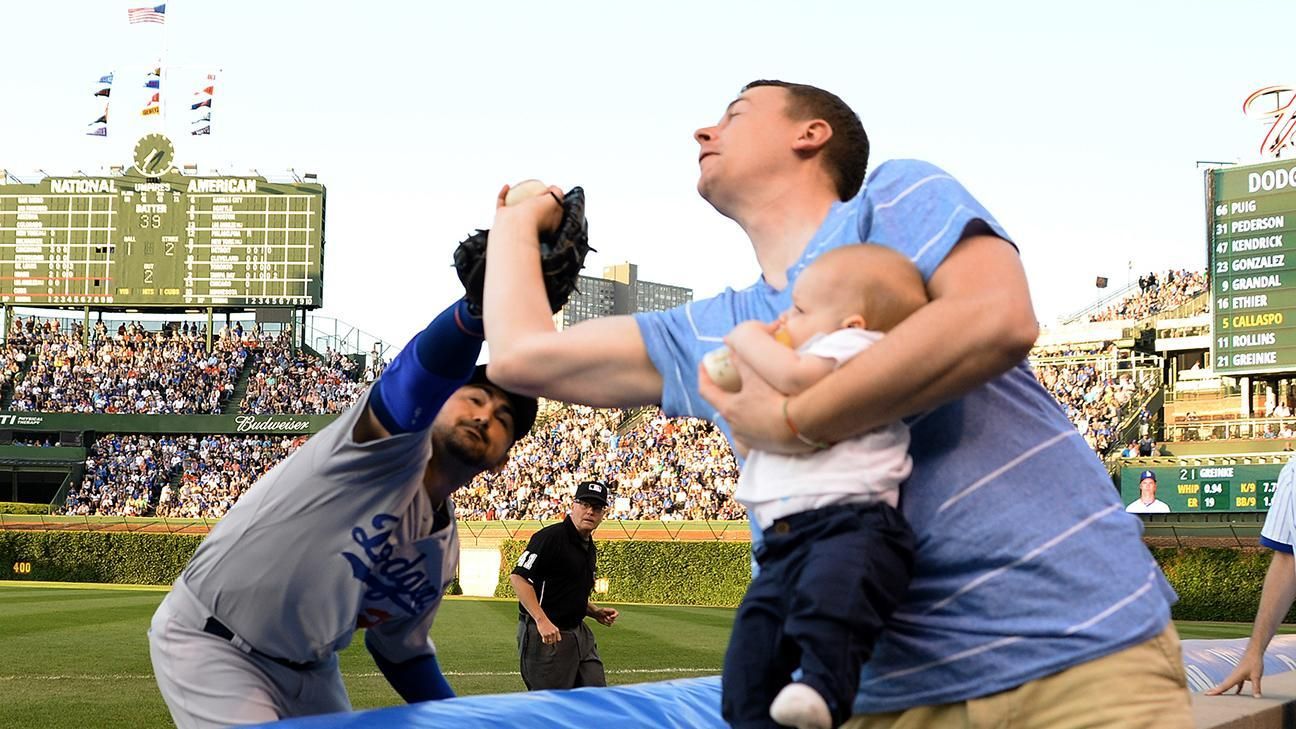