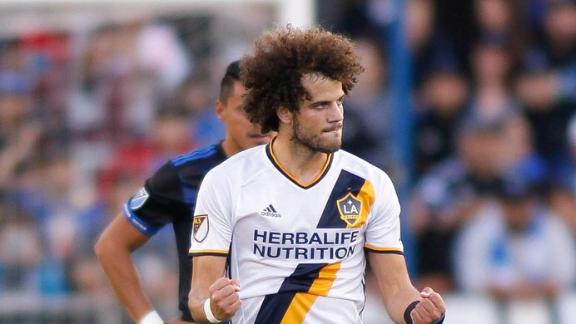 Dos Santos scored on a penalty kick in the 35th minute and had the only second-half goal in the 64th, heading home from a pinpoint Romain Alessandrini ball into the area. Dos Santos has six goals in the four-game streak.

Chris Wondolowski scored off Danny Hoesen's cross to the back post to give San Jose a 1-0 lead, before Joao Perdo answered for the Galaxy.

Dos Santos scored on the penalty after a foul on Kofi Sarkodie. Hoesen scored his first goal with the Earthquakes to tie it before Los Angeles took the lead when Bradley Diallo's cross went off Victor Bernardez's head for an own goal.

The Galaxy won their fourth road game this season, while the Earthquakes lost for the first time in seven home matches.

Cristian Roldan scored from a header following a corner kick in the fourth minute and the Seattle Sounders held on to beat the rival Portland Timbers 1-0 on Saturday.

The first of three matchups in the regular season between the Cascadia rivals landed on a sun-splashed afternoon where the quality of the weather exceeded the soccer.

There were chances on both ends, but only Roldan was able to find the back of the net even as he was being hugged from behind by Portland defender Zarek Valentin.

Roldan's first goal of the season was a reactionary flick after Chad Marshall initially directed Nicolas Lodeiro's corner kick toward the goal. Portland goalkeeper Jake Gleeson was frozen by the redirection from Roldan.

Seattle won its second straight match, while the Timbers -- once on top of the Western Conference -- are winless in their last five matches.

Lamar Neagle scored after a controversial penalty decision and D.C. United earned a 1-0 win over the Vancouver Whitecaps, who missed a stoppage-time penalty with a chance to salvage a draw.

Jose Ortiz is likely to face discipline from MLS next week after going down under the slightest contact to earn the penalty on the hour mark, and Neagle scored the resulting spot kick to put D.C. ahead.

The Whitecaps were given a lifeline deep into stoppage time when Brek Shea was awarded a penalty after being inadvertently punched in the face by D.C. keeper Bill Hamid.

Shea's header crashed off the crossbar just before contact was made -- the third time Vancouver hit the woodwork in the game -- and Cristian Techera then made it four times when his penalty stayed out after striking the inside of the post.

Bradley Wright-Phillips and Daniel Royer scored in the second half and the New York Red Bulls fought back from a goal down to secure a 2-1 win over the New England Revolution.

The Revolution took the lead in the ninth minute when Lee Nguyen converted a penalty after Diego Fagundez was taken down in the box by Damien Perrinelle.

But the Red Bulls got back level one minute into the second half when Revs keeper Cody Cropper could not hold onto a cross and Wright-Phillips used a clever back heel to poke the ball into the net.

The comeback was complete in the 74th minute when Royer tapped in a low cross from Kemar Lawrence on the wing.

Christian Ramirez scored the only goal to give Minnesota United coach Adrian Heath a 1-0 win over his former club Orlando City.

Johan Venegas played a delightful flicked pass forward toRamirez, who ran in on goal and got past goalkeeper Joe Bendik and watched a defender slide past him before slotting home in eighth goal of the season.

Heath previously managedOrlando in its first two seasons in MLS before he was fired last July and took over expansion Minnesota this season.

Orlando outshot United 20-5, but Bobby Shuttleworth made seven saves for the shutout.

Kortne Ford scored his first career goal and Tim Howard made it stand with his 24th MLS shutout in the Colorado Rapids' 1-0 victory over Sporting Kansas City.

Ford got his head to Shkelzen Gashi's free kick into the box, guiding it into the corner in the 11th minute.The homegrown defender, who attended a nearby high school and played for the University of Denver, was playing in just his fifth game.

Howard made just one save for his second clean sheet of the season and ninth in two seasons with Colorado. The U.S. national team star had 15 shutouts with the MetroStars before playing 12 years in the Premier League.

Sporting KC had a 25-6 shots advantage but couldn't find the target. The last disappointment came when Seth Sinovic skimmed a shot off the top of the crossbar in the second minute of stoppage time.

Plata tapped in his goal in the 36th minute after quickly exchanging short passes twice with Jefferson Savarino. Tony Beltran got the play started by saving the ball just before it went over the line.

The Union had a chance to tie it in stoppage time, but goalie Nick Rimando blocked Haris Medunjanin's belt-high free kick and RSL cleared it after a scramble in front of the net.

San Jose 2-4 LA Galaxy: Thriller in Cali Clasico
Defense was optional in the California Clasico as LA Galaxy were on the winning end of a six-goal thriller at San Jose.

Vancouver 0-1 D.C. United: Controversy and drama
D.C. United scored from a penalty kick after an apparent dive, then had to rely on the post on a late penalty for the win.

NYRB 2-1 Revolution: Red Bulls complete comeback
An early New England PK was canceled out by two second-half goals from the Red Bulls to take all three points at home. 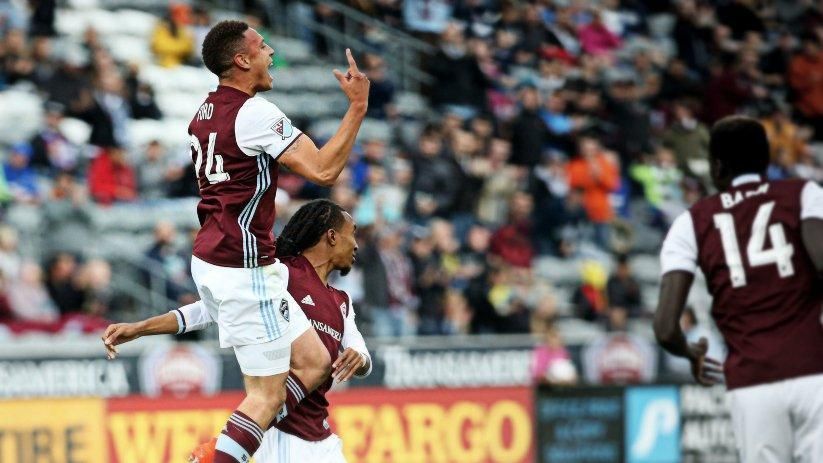