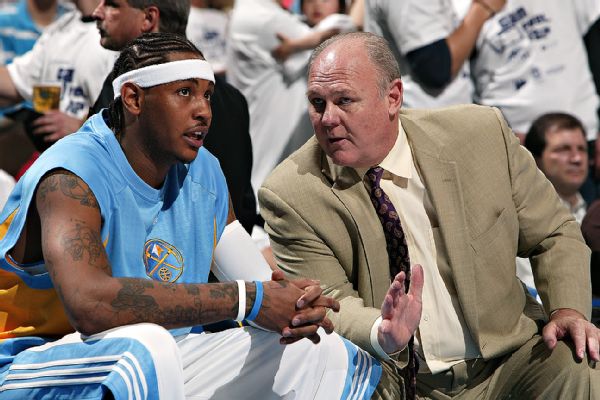 Former NBA coach George Karl didn't hold back in his criticism of Carmelo Anthony, writing in a book set to be released in January that the New York Knicks forward was a "true conundrum" during their time together with the Denver Nuggets.

"Carmelo was a true conundrum for me in the six years I had him," Karl wrote in "Furious George," according to an advance copy obtained by the New York Post. "He was the best offensive player I ever coached. He was also a user of people, addicted to the spotlight and very unhappy when he had to share it.

"He really lit my fuse with his low demand of himself on defense. He had no commitment to the hard, dirty work of stopping the other guy."

Karl coached Anthony from January 2005 to February 2011, when Anthony's demand for a trade was fulfilled and he joined the Knicks. Karl said the trade was"a sweet release for the coach and the team, like popping a blister."

Fired by the Nuggets after the 2012-13 season, Karl served as an ESPN analyst before returning to the sideline with the Sacramento Kingsin February 2015. An acrimonious season-and-a-half in Sacramento ended with Karl's firing after the 2015-16 campaign.

Karl, who has also coached the Cleveland Cavaliers, Golden State Warriors, Seattle SuperSonics and Milwaukee Bucks, has a career record of 1,175-824.

The coach was also critical of J.R. Smith and Kenyon Martin, comparing those two, along with Anthony, to "the spoiled brats you see in junior golf and junior tennis."

Karl wrote that Smith, who is now with the Cavaliers, had "a huge sense of entitlement, a distracting posse, his eye always on the next contract and some really unbelievable shot selection."