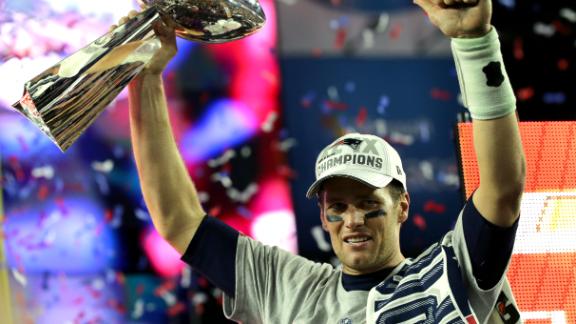 Tom Brady is tied for second all-time with four Super Bowl rings, but the only man with more -- Charles Haley -- believes that the New England Patriots quarterback had to "cheat" to get his.

When asked to choose between Brady and Joe Montana, with whom Haley won two Super Bowls with the San Francisco 49ers, Haley didn't hesitate.

"Joe didn't have to cheat," Haley told the Talk of Fame Network. "I've lost all respect [for Brady]. When your integrity is challenged in the game of football, to me, all his Super Bowls are tainted.

"You have to say this just didn't happen overnight. Who wants that shadow over them? I could be wrong. But I realize there were 12 balls deflated and 12 ain't. Then you've got [Patriots coach Bill] Belichick coming on three different times trying to explain it. ... You know something is wrong."

Haley, who won three more Super Bowl rings with the Dallas Cowboys and was inducted into the Pro Football Hall of Fame last week, was in Arizona for Super Bowl XLIX as Brady tied Montana with his fourth title as the Patriots beat the Seattle Seahawks 28-24.

But the stigma of Deflategate has Haley believing otherwise about Brady's legacy.

"This is what Charles Haley believes -- it's going to come back to haunt him one day," Haley said. "If the league doesn't come down on this guy. ... Everybody is talking about it. Nobody believes it was by accident. It is what it is.

"I'm not going to take any of his Super Bowl rings away from him. But it's sad that it has to be tainted like it is right now. Hopefully they'll come out and let us know what really happened. Then all the mystery is gone."

When asked on ESPN's "First Take" about Haley's comments, Patriots defensive end Rob Ninkovich stuck up for his quarterback.

"Everyone is entitled to their own opinion," Ninkovich said Friday, "but the last drive that we scored in the Super Bowl, where Tom was 9-for-9, I'm sure the ball was properly inflated."

The league said Jan. 23 that evidence shows the Patriots used underinflated footballs in a 45-7 victory over Indianapolis that gave them the AFC championship. The NFL said before the Super Bowl that it is still investigating but has no conclusions and no timetable for resolving the cheating accusations.

Haley will be enshrined in the Hall of Fame in August along with the rest of the Class of 2015, which includes Junior Seau, Jerome Bettis, Tim Brown, Will Shields, Mick Tingelhoff, Bill Polian and Ron Wolf.