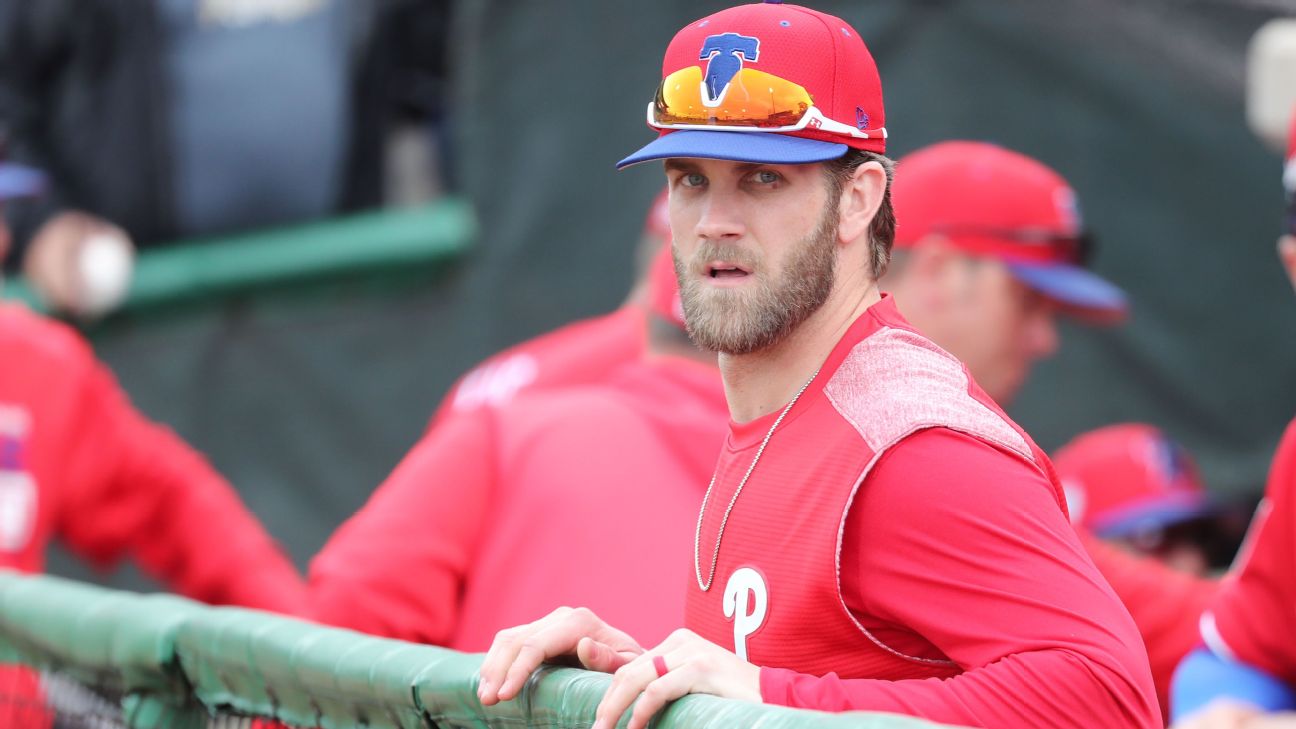 After hitting a home run in his first simulated game with the Phillies, Bryce Harper stood by his comments about recruiting Mike Trout to Philadelphia on Wednesday.

"If I didn't mean it, I wouldn't have said it," he said Wednesday.

Major League Baseball announced Wednesday that it was aware of the situation and has spoken to both the Phillies and Los Angeles Angels about Harper's comments toSportsRadio 94WIP in Philadelphia on Tuesday in which he said,"If you don't think I'm gonna call Mike Trout to come to Philly in 2020, you're crazy."

On Saturday at his introductory news conference after signing a 13-year, $330 million contract with the Phillies, Harper alluded to recruiting Trout in 2020 but didn't use his name.

Speaking to a group of Boston business executives on Wednesday, commissioner Rob Manfred said he doesn't want players recruiting other players, a practice that has been winked at in the NBA. Manfred said he didn't want to see the same thing happen in baseball.

"Given our rules, players recruiting other players who are still under contract or under reserve to another club is a rule violation,'' he said at the Boston College Chief Executives Club. "So, obviously not anxious to see that.''

Harper said Wednesday he hasn't spoken with MLB about his comments, which could be a violation of the league's tampering rules. He implied the Phillies had talked to him, however.

"They talked to me a little bit. Not MLB or anything like that but I guess when that time comes and guys are free agents and we'll see what happens. But I don't know," he said.

Baseball Rule 3(k) prohibits "negotiations or dealings respecting employment, either present or prospective, between any player, coach or manager and any Major or Minor League Club other than the Club with which the player is under contract.''

"We're in the process of gathering information about the comments and the context in which they were made,'' he said. "We're talking to both clubs and when we're ready to decide whether it did or it didn't we'll let you know.''

Trout, who grew up near Philadelphia and is a vocal fan of the Philadelphia Eagles, also commented on Harper's remarks on Wednesday.

"Obviously I saw it," Trout told reporters. "He's excited. He's excited about his team. I have no control over what he says."

Harper could face a fine from MLB for using Trout's name publicly.

"There is a rule against tampering for a reason," Angels manager Brad Ausmus told reporters Wednesday, according to the Los Angeles Daily News. "There has been for a long time. I don't know if it's a bigger deal or not (now). It's reported more because of social media, but I don't know that it's any bigger of a deal. It's always been a big deal."

Harper hit his home run off Phillies right-hander Jerad Eickhoff, sending a curveball over the fence. He said Wednesday it "felt good" to be back on a baseball field.

"Just getting out there, seeing pitches, seeing spin. First day, just want to see as many pitches as you can. Try to get a barrel on a couple," he said.

Harper is scheduled to make his Grapefruit League debut for the Phillies on Saturday against the Toronto Blue Jays. 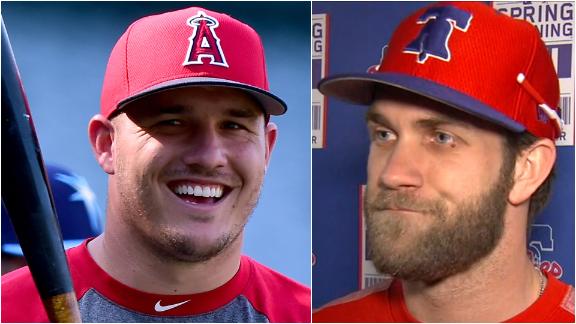