'I know I was the best': The online battles of Exum, Simmons 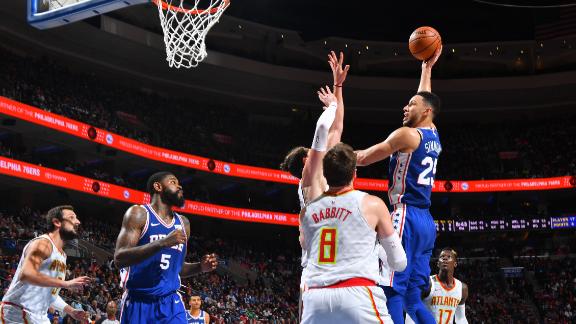 Ben Simmons better be careful when he takes on Dante Exum one-on-one on Wednesday. No, it won't be on the hardwood when Philadelphia takes on Utah -- Exum will miss the game as he recovers from shoulder surgery -- rather, their battle will be fought online as the Australian duo go head-to-head in a game of Call of Duty: WW2.

Both Exum and Simmons are huge fans of the Call of Duty series, regularly indulging in battles when they're not training or playing a game, but according to Exum, Simmons is not in the same class as him when it comes to COD.

"Oh, it's me," Exum told ESPN when pressed about who the better of the two is. "He's good. We used to play when we were younger a lot. I know I was the best out of me, Ben and my brother.

"I'm definitely going to carry that over [to the live game]. I talked to him about it today and I know he's super pumped.

"It's going to be some light trash-talk, but we're definitely going to be competitors about it."

Exum began playing games years ago, ending up with a Playstation 3 somewhat fortuitously when the Nintendo Wii his mother originally set out to buy for her kids for Christmas was not available. Soon enough he fell in love with the Call of Duty series, and a gamer was born.

"Me and my brother have been playing since Call of Duty 4, I think Ben got on the next game after that," Exum told ESPN. "We talked Ben into getting one [PS3] as well, and from there we started playing online all the time. We had sleepovers where we would stay up all night playing video games."

When Simmons was selected with the first overall pick in the 2016 NBA Draft, he mentioned Exum as one of the Australian players he was most looking forward to matching up against. He's going to have to wait until next season for that given Exum's injury, but still, the duo keep track of what each other is doing, and always try to find time to catch-up during a hectic NBA season.

After Exum's injury, Simmons was one of the first to text him.

Exum has been keeping a close eye on the impressive campaign Simmons has been having thus far.

"He's been doing really well," Exum says. "Obviously everyone in Australia knows that, and not just him but his team, and what they've been able to do so far this year and how he's handled it.

"He's been great. I look forward to seeing what he does. How we scout him, and how he goes against our scout and what we're trying to do against him."

If Simmons needs an updated scouting report on Exum's Call of Duty skills, though, all he needs to do is watch footage of Exum on the floor. The Jazz guard says he plays Call of Duty the same way he approaches an NBA game.

"I'm fast, downhill, trying to attack," he says. "I play like how I play. I'm just trying to be in there, be where everything's happening. I think everybody knows that, and that Call of Duty is my game."

Ben Simmons has been warned.