Inside the Eagles locker room: No underdogs, just top dogs 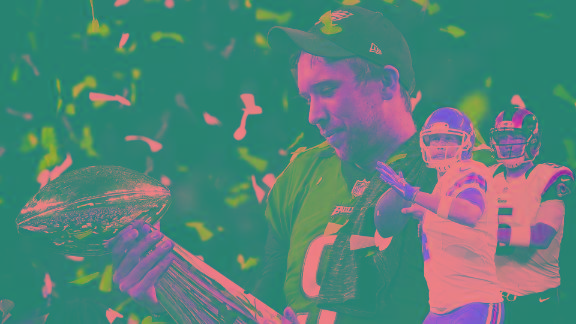 THERE IS ALWAYS a story to be told in the crowded, chaotic rhythms of the stadium corridors just moments after the conclusion of a Super Bowl. At 9:45 Sunday night in Minneapolis, with Tom Petty's Eagles anthem "I Won't Back Down" still echoing from the field, Tom Brady strolled back to the Patriots locker room in quiet solitude behind a thin black curtain that offered little protection from the bitterly frigid air. At that exact moment, headed in the opposite direction and passing within feet of Brady, was Eagles quarterback Nick Foles, surrounded by a sea of family and friends, adoring fans, cheerleaders, team officials, a dozen TV cameras and a full security detail that ordered everyone to MAKE ROOM for the NFL's newest, and most unlikely, quarterback king.

Late Sunday, after Foles and the Eagles had completed the greatest underdog run in NFL history, I wandered down into the concrete hallways below U.S. Bank Stadium in search of the ubiquitous dog masks that had become the unofficial symbol of the Eagles' inconceivable run from NFC mutts to Super Bowl champions. But while I found plenty of Eagles hats and Eagles wings, some fur coats, lots of bear hugs, a Union Jack cape and even a Browns jersey, I didn't see a single dog mask.

And as I continued my search over the next hour inside the Eagles' epic post-Super Bowl locker room celebration, I watched firsthand as this team -- and, perhaps, the entire city of Philadelphia -- transformed before our very eyes from the greatest underdog act in the NFL to the top dogs of the sports world.

AT 10:14 INSIDE the Eagles' expansive, plush locker room, with Foles still in demand and surrounded by a mob that, at times, runs 10 deep, a softly smiling Carson Wentz quietly shuffles past his celebrating teammates underneath a cockeyed championship hat. There's just the tiniest hobble caused by his surgically repaired knee and just the tiniest hint of bittersweet joy in his countenance. How could the Eagles' franchise quarterback not be feeling conflicted? After Foles threw a 22-yard touchdown to undrafted rookie free agent Corey Clement to make it 29-19 halfway through the third quarter, fans in Minnesota sounded like they were doing the "SKOL!" chant. But they were actually yelling for the greatest, truest Philly underdog of them all: Foles.

In a moment, though, whatever is on Wentz's mind is drowned out when someone mercifully dumps Queen's "We Are the Champions" and, instead, cranks up a full-team, full-blast, full-bounce, 15-minute rendition of Kap G's now-fitting "Rings." This is followed by samples from Cardi B and Meek Mill, which means it's safe to say the Eagles have both the best football team and the best NC-17 postgame playlist on the planet. (In my mind, Post Malone kinda set the tone for this crazy game the night before when he ended his set at the ridiculously awesome Maxim party by imploring everyone to "make some mistakes, make some babies and have a Super Bowl!")

At 10:19 the first tsunami of champagne misses Eagles owner Jeffrey Lurie, who is dancing (if that's what we're calling it) in the middle of his players, and instead soaks my entire notebook while I just happen to be noting the immense difference between this locker room and the Patriots' after Super Bowl LI. Of course, there are many different ways to conduct yourself after winning the Super Bowl, and there is absolutely nothing wrong if an organization like the Patriots chooses to take a businesslike approach to victory, even if it borders on joyless.

But I gotta say, and I think most of America agrees with me on this one: Just like quarterback catches and trick plays, the Eagles do Super Bowl celebrating so much better than New England. And it's kinda nice to be reminded that this is all actually supposed to be fun.

Watching from just outside the dance circle is a beaming Jim Schwartz, a pupil of Bill Belichick's years ago in Cleveland and now the Eagles' defensive coordinator. Schwartz and I go back a bit -- when he was in Tennessee we once spent an entire interview talking about blackjack strategy as a way of understanding how defenses try to minimize the odds of playcallers -- and even though he didn't want to talk, it was obvious he understood just how rare it is for a former Belichick assistant coach to get the better of his mentor, especially in the Super Bowl. And if Schwartz's smile didn't give it away, his four-figure, crystal-ensconced, custom-made, sparkling loafers did the trick. That's how confident Schwartz is, I guess: He already has the shoes to match his new Super Bowl ring.

A moment later, when head coach Doug Pederson calls the team together for a chat, it is Schwartz who passes him the Lombardi trophy so he can hold the hardware while he talks to the team. (I have to be honest here: I missed most of Pederson's speech while listening to members of the Eagles organization speculate about how fans in Philadelphia would react to the win. "There might not be anything left by the time we get home," is how one team member put it. There were some arrests, at least one overturned car and a collapsed hotel awning on Broad Street, but, for the record, Philly is still standing.)

But I do manage to catch Pederson's most poignant moment, near the end when he hoists the trophy into the air and shouts, "An individual can make a difference ..." and the locker room finishes his sentence by yelling back to him, "... but a team can make a miracle!"

By this point, I have all but given up my search for dog masks when Mr. Underdog himself, Chris Long, enters the locker room. The top-seeded Eagles, presumed doomed after Wentz blew out his knee in December, joined the 1980 Raiders and the 2007 Giants as the only teams in NFL history to capture a title after winning every playoff game as an underdog. The whole dogface thing started when the Eagles sneaked past the favored Falcons in the divisional playoffs. Afterward, Long donned a kinda creepy German shepherd mask as a way of mockingly celebrating the Eagles' status as the greatest underdog in sports since, I guess, Rocky, or, perhaps, the science of basketball analytics.

Just like that, a Super Bowl fad was born.

And, just as quickly, dog masks seem to have mercifully gone the way of the Discount Double-Check, Cam's Dab, the Dirty Bird and, god willing, Dilly Dilly.

Because except for the wolf tattoo on his left biceps, Long and the rest of the Eagles seem to have moved on rather quickly from the whole underdog shtick. And, quite frankly, after destroying a dynasty like New England, it doesn't really fit them anymore anyway. "The way this whole year has been for us, how could this team and this city and this game go any other way?" Long laughs. "For us, it was perfect. I'm sure the whole world at home was watching and going 'Oh, here we go, here's where the Eagles panic.'"

It's a legitimate concern, I tell Long, after checking his locker thoroughly for dog masks. (Nothing.) Because by my count, three teams have basically handed Super Bowls to New England, all because they got spooked by the big, bad, zombie Patriots and tried to "over-kill" them late in the game with, oh, I don't know, stupid pass plays at the goal line.

"But there was no panic, not from this team," Long says. "I know what the whole world was thinking late in the game, but we've been proving the whole world pretty wrong for most of this season."

While this Super Bowl, with a record 1,151 yards and 74 points, featured less defense than the Pro Bowl, it did feel inside the stadium like Long or one of his defensive line mates would need to step up and become a Philly legend. That guy was defensive end Brandon Graham, whose strip sack on Brady would seal the win for Philly.

If you're worried the play might have gone to Graham's head, don't. At 10:44 p.m. inside the Eagles locker room, Graham, still dressed in a game uniform streaked with Patriots red and blue across the front, is on FaceTime at his locker, doing the E-A-G-L-E-S chant with his family back in Michigan. Having seen the Falcons run out of gas late in last year's Super Bowl, the Eagles' defensive line made a point of trying to stay fresh for the Patriots' inevitable fourth-quarter surge.

"Shoot, I'm still fresh, I could go play some more right now," Graham jokes. "We just knew we had to keep coming, keep pushing the pocket and make that play when we got the chance. So we stayed aggressive and we kept coming and we matched their intensity." On his game-winning play, Graham got leverage by feigning a stunt. When the blocker overpursued, Graham used that momentum to throw him off balance and clear a path to Brady.

"Brady only had to hold the ball on one play and it ended up costing him the game," Graham says. "And now we're legends for life in Philly!"

Now, as the red digital clock inside the Philadelphia locker room clicks toward 11, the Eagles coax players toward the team buses with a makeshift dinner buffet set up near the exit that gives the area the thick, rich smell of a steakhouse. (Underdogs eat hot dogs. Champions eat prime rib.) But while most teammates leave the locker room with carryout boxes full of steak, 310-pound defensive tackle Fletcher Cox's hands are already full.

In the hallway, tackle Beau Allen is already talking about "getting back to Philly, man, that will be a sight to see. We started this thing as underdogs and ended up making history." Next to him, a few feet away from broadcaster Tony Dungy and Brian Dawkins, the Eagles' newest Hall of Famer, Lurie speaks softly about his parents and especially his dad, who taught him football. Asked to sum up this year in one word, he chooses "ethereal." Ah, a thing of delicate beauty that seems too perfect for this world.

One might also use that word to describe the silver Tiffany keepsake cradled safely in Cox's right arm as he exits the locker room. As the cornerstone of the franchise, the Eagles couldn't find a more perfect guy to safeguard Philly's most important artifact since the Liberty Bell. And this scene, with Cox, chomping on a stogie, wearing his new Super Bowl champ T-shirt and carrying that trophy home to Pennsylvania, feels like the perfect final moment to this incredible season.

Several hours earlier, while warming up before the game, Cox began the day, like all of Philadelphia, wearing a mask labeled: underdog.

He ended it by trading in his dog mask for the Lombardi trophy and a much better moniker: world champion.