Iowa State AD: 'It's not fair' 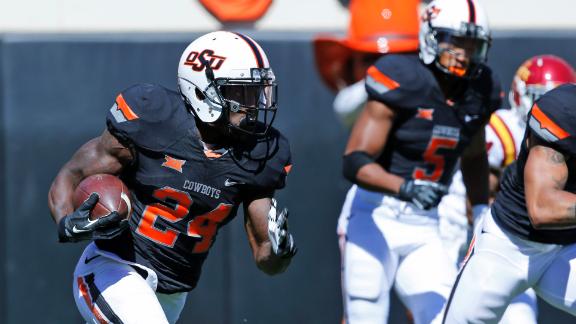 "We've been on the short end of several controversial calls," Pollard said during an impromptu postgame news conference. "And it's hard to sit idle and watch ESPN, FOX and other announcers, not debate, but to feel sorry for Iowa State, because maybe there will be another apology for a call."

Pollard referenced a controversial call at the end of the first half, when officials initially ruled that Oklahoma State running back Desmond Roland had been stopped short of the goal line as time expired. But after a review, the call was reversed, giving Roland the touchdown and the Cowboys a 13-6 halftime lead.

This isn't the first time the Cyclones have criticized Big 12 officiating. Following a 31-30 loss to Texas last season, Iowa State coach Paul Rhoads was irate after Longhorns running back Johnathan Gray appeared to fumble at the Cyclones 1-yard line.

Officials, however, ruled that Gray's forward motion had been stopped, negating the fumble. The Longhorns scored the game-winning touchdown on the next play.

The Big 12 office also apologized to Iowa State and suspended a replay official after he failed to review a controversial play in the Cyclones' loss to Kansas State earlier this week.

"I recognize that the Big 12 does not allow comments to be made on officiating and I recognize there are penalties for that," Pollard said. "But our institution has been penalized already.

"Something has got to be done. I don't know what it is. But there needs to be more accountability."