Is Bryce a bust? Not if you take Harper's word for it 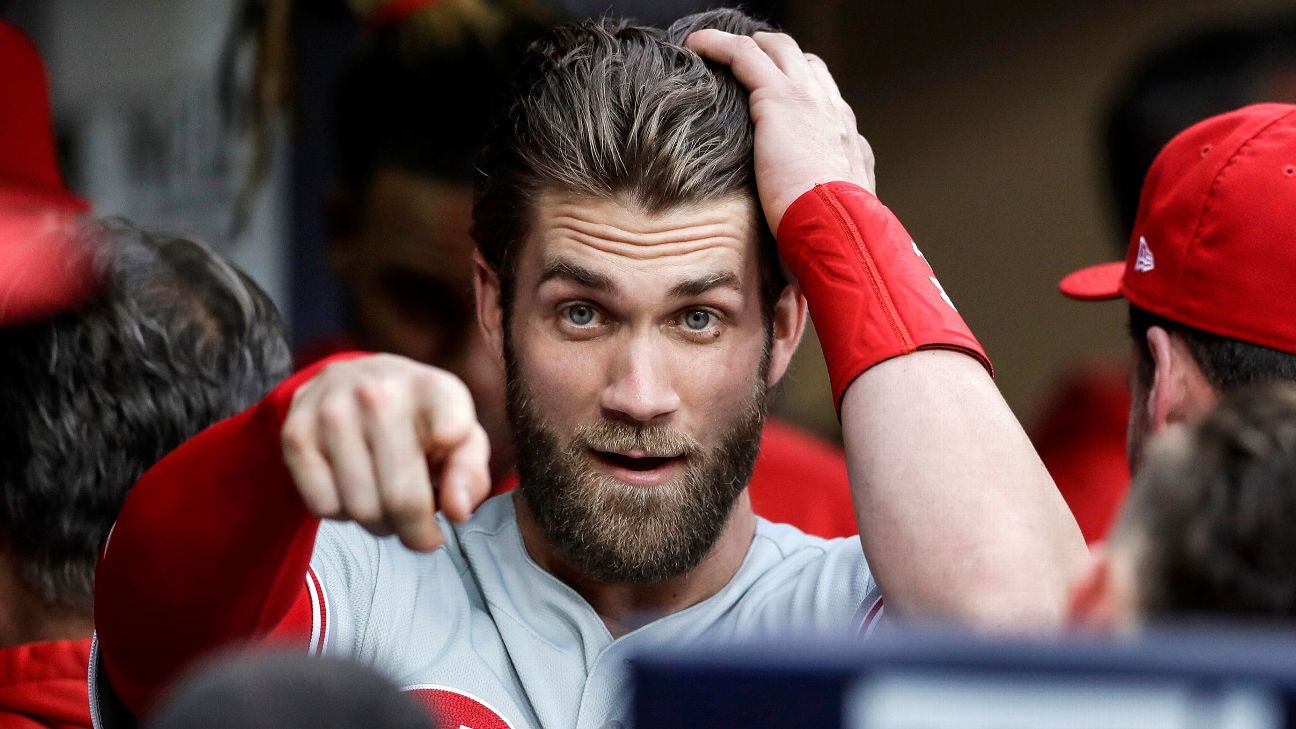 ESPN
By Sam Miller
Introductory news conferences to announce a free-agent signing can get crazy quickly, and -- given how unpredictable baseball performance is -- it often takes no more than a year before the most grandiose claims look desperate. But when the Philadelphia Phillies signed Bryce Harper-- the rare star to hit free agency while still in his mid-20s -- the news conference, on a spring training field in Clearwater, Florida, was relatively subdued.

Nobody promised a World Series this year, or even a division title. Nobody promised an MVP award. The theme of the event, from Harper especially, was, simply, that he was going to be a Phillie for a long time, and that the length of the contract was itself the message. We're family now. That was the theme.

In his final answers, though, Harper let loose a little bit. He was asked this: "You're a big student of baseball history. Wonder how important it is for you to make history?"

"You're always remembered for winning," he said. "For me, it's all about winning. That's what you're remembered for, that's what it's all about. Personal accolades, they're great. But for me if our team plays well and our team plays together -- I find joy in my teammates' success. It's about what we can do to get that extra run to win the game, and to win for a long period of time. I'm excited to try [to] make that run."

And then, in his final answer, he expanded:

One year into "the longest contract possible" is, of course, too early to judge anything, and the standard Harper set for success in Philadelphia is far broader than a year of stats or one season's record. But in those two answers, Harper gave us a little bit of a road map -- a very nuanced one -- for what standards he set for on-field success.

"You're always remembered for winning." This is explicitly the philosophy of the mid-decade Astros and Cubs, who figured out that losing doesn't matter if it's followed by winning. Absurdly low spending and multiple years of artificial awfulness would be forgiven, that philosophy went, if the team was ultimately building to something big and successful. The Cubs and Astros were; each team won the World Series. That cycle looked so foolproof, many teams since have tried, with varying degrees of success, to repeat it. But to be forgiven for on-purpose losing seasons -- the Phillies cut their payroll in half and lost at least 90 games three seasons in a row -- requires the payoff. Last year's team went 80-82 in what was supposed to be a bridge year. But this year, the prospects had matriculated, trades had been made, money had been spent -- Harper had been signed. The Phillies are still hovering around .500, slipping slowly out of the wild-card race, trailing two teams (the Brewers in the wild-card race, the Braves in the NL East) who more successfully pulled off the teardown-and-rebuild cycle.

But this year was his first healthy season in which he didn't make the All-Star team, and he might not be named on an MVP ballot, either. He's 55th in the majors (among qualified hitters) in OPS+, and he's 104th (among all hitters) in WAR.

Originally, we wrote that last sentence with "just" before each ranking, but "just" stacks the deck against him. He undoubtedly makes the Phillies better by his presence. For that matter, most teams would probably happily pay him $25 million for exactly this performance. But it's also probably fair to say that, in the first of 13 years, the Phillies would have expected and hoped for more than this. His projections going forward will get worse because of this year. The 2015 MVP season is further in the distance; so, for that matter, is the 2017 season.

"If I'm 0-for-4 or 4-for-4, that doesn't really matter. It's about what we can do to get that extra run to win the game." But here's where things shift strongly to Harper's favor. Harper's overall numbers are down, near career lows in some categories (and career highs in strikeout rate). But Harper has been extraordinarily clutch this year -- literally the clutchest hitter in baseball, according to FanGraphs' measures.

Statistically, "clutch" means a player hits better in the highest-leverage moments than he does in lower-leverage ones. It means his impact on his team's win probability is greater than his overall numbers alone would suggest. So, for example, here's Harper by various game states:

Since "clutch" is basically a ratio of two splits, a player can measure out as clutch because he has been really incredible in one, or because he has been really terrible in another, or -- as in Harper's case -- a little bit of each. His low-leverage stats are dragging his overall performance down, making his WAR look mediocre and his career path look less encouraging. But his high-leverage stats are doing what he's trying really hard to do, which is help the Phillies win. By Win Probability Added, Harper ranks fifth in all of baseball, behind only Christian Yelich, Mike Trout, Cody Bellinger and Freddie Freeman (in case you're worried that WPA is a junk stat with a junk leaderboard). He has driven in a higher percentage of his baserunners than Trout, Bellinger or Yelich.

"To be able to put all my faith and trust into everybody in this organization, I'm very excited about it." The Phillies have about a 1-in-16 chance of making the playoffs at the moment. It's not Bryce Harper's fault. They're an average team with an average pitching staff and an average defense and (Harper and a couple of others aside) a below-average offense. Harper's Win Probability Added is more than double the second-best Phillies hitter, more than triple their third best. The organization, as a collection of hundreds of personnel on and off the field, hasn't been very successful this year. The Phillies might still rally and get there, but, at the moment, they're not. They've let Harper down.

Well, maybe. Earlier in that news conference, Harper said this, which seemed merely modest at the time but perhaps prescient now:

"The thing about the East is it's a juggernaut. I'm not going to tell you that we're going to come in this year and win the World Series or win the division this year. That's the goal. But good things take time, as well."

That's what makes all of this especially complicated: Harper emphasized time, over and over and over again. In a measured, almost wistful tone, he talked about the power of time to build relationships, among players and also between players and the city. He reframed the extraordinary length of his contract -- which is so often treated as a liability in a megadeal -- as the main benefit. Time would ease the pressure, remove uncertainty and free both sides up to build something patiently and permanent.

But time is also what causes degradation and demise. The actuarial tables would tell us Harper will never be as certain as he was supposed to be this year, and might soon start to get worse -- subtly at first, but then again maybe not.

And so, in this year, when there was tremendous hope that Harper would be a dominant offensive force -- he was. But he was dominant in a way that is usually fleeting-- clutchness -- and for a team that probably wasn't good enough to make it really count.

You could take, from all of this, that Harper's first year as a Phillie has been a bit disappointing. But he was pretty clear when he introduced himself: He's not working on our timetable. He's still got time. 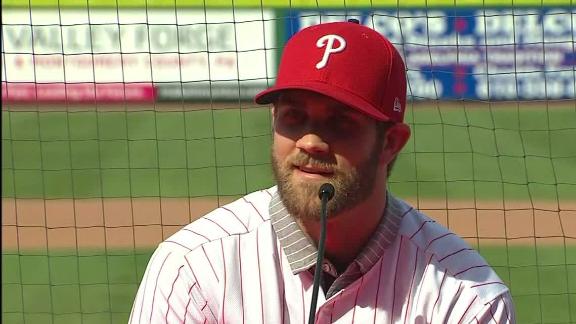 Harper's slip: 'Bring a title back to D.C.'
While talking about winning a World Series with the Phillies, Bryce Harper says "We want to bring a title back to D.C."
Report a correction or typo
Related topics:
sportsespnmlbphiladelphia philliesbryce harper
Copyright © 2020 ESPN Internet Ventures. All rights reserved.
More Videos
From CNN Newsource affiliates
TOP STORIES