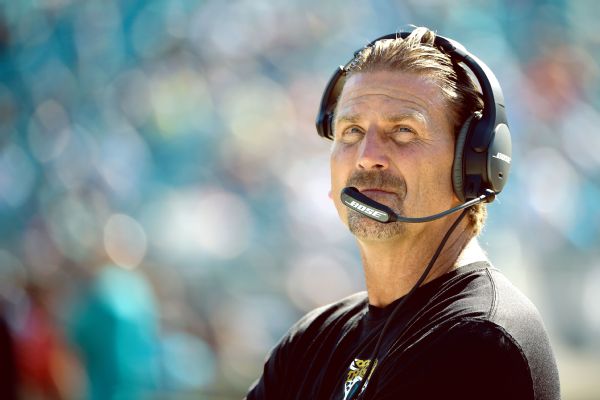 Quarterbacks coach Nathaniel Hackett will take over playcalling duties. He previously served as the offensive coordinator with Buffalo in 2013-14 under head coach Doug Marrone, who is now the Jaguars' offensive line coach.

"Greg was a tremendous asset and always put all of his effort in doing everything he can to help in his players' improvement," Bradley said in a statement. "He did some great things with our offense over the past two seasons, and for that, we are very appreciative.

"After a thorough evaluation, I came to the conclusion that with the direction that our offense was headed, it was best to make a change moving forward."

Olson was hired in January 2015, and his first season with the Jaguars was a success. The Jaguars ranked 18th in total offense, and quarterback Blake Bortles set franchise records in passing yards (4,428) and passing touchdowns (35). The offense has struggled this season, however, and Bortles has looked the way he did as a rookie in 2014.

The Jaguars are 31st in the NFL in rushing, last in third-down conversions, 25th in total offense and 13th in pass offense. Bortles has completed 60 percent of his passes for 1,904 yards and 12 touchdowns with nine interceptions, but he has compiled most of those stats while playing with double-digit deficits. He has thrown seven touchdown passes when the Jaguars have been trailing by 10 or more points.

The offense hit a low point in Thursday's 36-22 loss at Tennessee, gaining only 60 yards and trailing 27-0 in the first half.

Hackett will be Bortles' third coordinator in three years.

"Nathaniel has a previous history as a play-caller in Buffalo and will bring energy and knowledge to the offensive meeting room," Bradley said in a statement. "He has built a great relationship with the offensive players and staff over the past two seasons."

Bradley hired Olson to replace Jedd Fisch, whom Bradley fired after two seasons.Bradley and Olson previously worked together on the Buccaneers staff in 2008.

"We all felt good about the offense coming out of preseason," Olson told ESPN. "Our inability to find an identity in the run game once the season started hurt the entire offense's ability to improve. ... I wish I was given more time but that's the nature of this profession."

Olson spent the 2013-14 season as the offensive coordinator for theRaiders after a one-year stint as the assistant head coach/quarterbacks coach in Jacksonville under then-coach Mike Mularkey.