Jeff Hornacek on triangle offense: 'It has won championships' 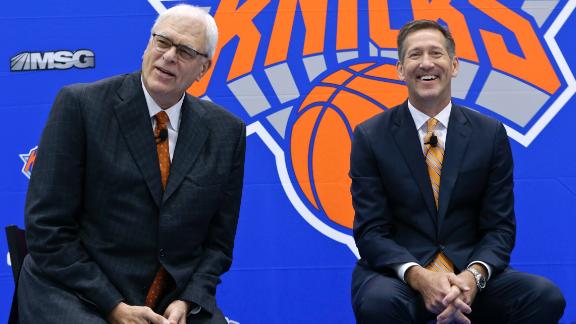 GREENBURGH, N.Y. -- New Knicks coach Jeff Hornacek plans to run portions of the triangle offense while adding elements of the up-tempo style he employed while with the Phoenix Suns.

"It will be a part of our offense. It's something that has worked; it has won championships," Hornacek said at his introductory news conference Friday afternoon at the Knicks' training facility. "You can space the court [with the triangle] and run a lot of the different things that I did in Phoenix. So there will be aspects of the triangle."

"They have been at a slower pace," Hornacek said. "We're going to have put some things out there that speed them up. We'll probably speed them up past where we want them to go and then we'll slow them down a little bit just so they get that in their habits. We'll speed them up. It won't be a difficult adjustment."

Hornacek said running a "bigger dose" of pick-and-rolls can be helpful in the "right situations." The Knicks in the past two seasons ranked in the bottom third of the NBA in pick-and-roll plays.But Hornacek also made it clear that the Knicks wouldn't be overly reliant on the pick-and-roll, mixing in some of the sets that are tenets of the triangle.

He also playfully wondered why there was such a focus on the Knicks' offense, which has received negative attention during New York's struggles.

"There must be something about the word triangle," he said. "Maybe we'll call it the circle offense."

Hornacek's hire was a bit of a surprise to many around the league -- even to members of the Knicks organization. Many expected the club to hire a coach who had experience running the triangle, but Jackson and general manager Steve Mills said they targeted Hornacek early in their search. Jackson added that he immediately connected with Hornacek during their first interview, when a "comfort zone" was established.

"The basketball knowledge that he has and the familiarity he has with playing are things that attracted us to Jeff," Jackson said.

The Knicks finished 32-50 this season under Derek Fisher and Kurt Rambis, who went 9-19 as the interim coach and was interviewed for the job before Hornacek was hired. Hornacek said he will have further discussions with Rambis, a former teammate in Phoenix, to see if he would like to remain on his staff.

Hornacek will be the fifth Knicks coach in the past six seasons and the second hired by Jackson since he took over as team president in March 2014. Some may view that as a sign of instability, but Jackson chose to focus on the positives.

"We are doing what we have to do to move forward," Jackson said, "and that is the important part."