Joel Embiid (hand) gets late nod to play for Sixers 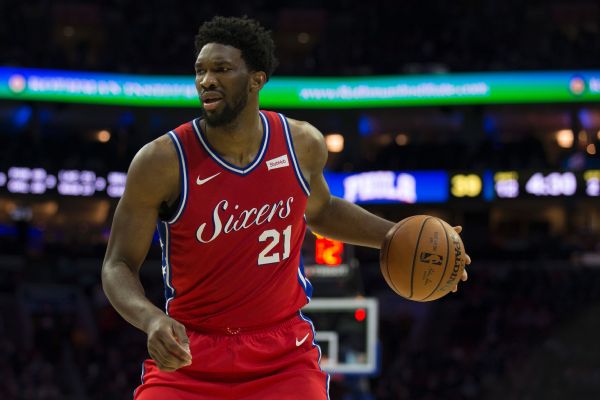 PHILADELPHIA -- 76ers center Joel Embiid was in the starting lineup against the San Antonio Spurs on Wednesday night after his coach said he was "very doubtful" to play because of a sprained right hand.

Embiid had said his hand was swollen and it made him unable to shoot. Embiid, who leads the Sixers with averages of 23.9 points and 10.9 rebounds in 27 games, was hurt Saturday when he took a hard fall against the Suns.

Coach Brett Brown said before Wednesday's game that Embiid was not likely to play. Embiid used a soft touch to sink a couple of shots during pregame drills, and that was enough to convince the Sixers he could play through the injury.

"When you see it, you see the bruising on his palm," Brown said. "When you go back and look at how he fell, you're surprised that's all it is. It's a club hand. And it's his shooting hand."

The Sixers had been used to playing without their cornerstone center. He missed his first two seasons with foot injuries and was limited to 31 games last season. He had missed nine of Philadelphia's 36 games before Wednesday.

"If you told us ... he was going to play this amount of games and minutes, we'd all be quite pleased," Brown said.

The Sixers had already announced their starting lineup with veteran Amir Johnson at center before they made the late change. Brown had said his star center might not play Friday against Detroit.

"When you throw it into the post and he's got to catch it, it's like touching a hot stove," Brown said. "You just see the pain that he's in when he touches the ball with his right hand."