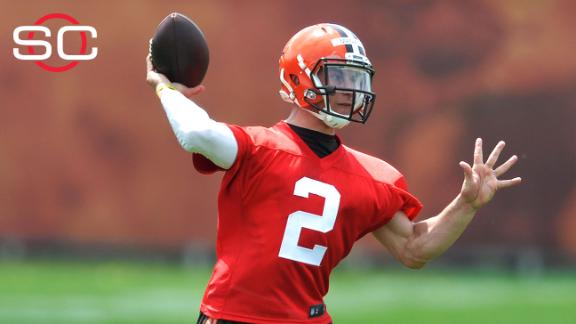 According to Manziel's agent, Erik Burkhardt, the former Heisman Trophy winner responded to the fan's harassment by alerting security personnel at the PGA event, which is held in Irving, Texas.

Manziel was photographed speaking to police at the tournament on Saturday, and the photos began circulating Sunday morning on social media.

Burkhardt told Northeast Ohio Media Group that he and Manziel, who has struggled with off-field issues since being drafted by the Browns last season, were attending church on Sunday morning.

The 22-year-old Manziel was released from a rehab treatment facility last month and apologized to the Browns organization and fans, vowing to "regain everyone's trust." He moved out of his downtown Cleveland apartment earlier this month and into a suburban golf community, a source told ESPN.

Manziel also had a run-in with a fan in November 2014 during a late-night altercation in downtown Cleveland. No arrests were made, and the fan ultimately apologized to Manziel in a Facebook post.