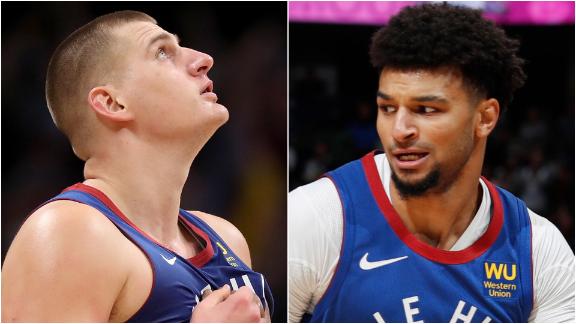 ESPN
DENVER -- Nikola Jokic lofted the winning shot and then pleaded for it to fall as he tumbled to the floor.

"I was hoping," he said. "I mean, you're happy that you didn't miss, because then everybody will be mad at you. The whole arena is going to be disappointed."

Instead, the Denver Nuggets big man sent the fans home with a game they won't soon forget.

Jokic hit a 20-foot jumper on a broken play with 1.2 seconds remaining, helping the Nuggets rally from a 21-point, fourth-quarter deficit to stun the Philadelphia 76ers 100-97 on Friday night.

It's the largest fourth-quarter comeback in their history, the team said.

Jokic scored 16 of his 26 points in the fourth quarter, none bigger than his jumper from the left side of the court that he saw go in from the floor. Before his shot, Jokic was trying to get the ball to Paul Millsap, who couldn't get off an attempt. He passed it back to Jokic.

On the next possession, Jokic drew an offensive foul on Joel Embiid by fronting him near the basket. It was the sixth foul on a frustrated Embiid.

"I'm kind of heavy. He needs to push a lot just to push me out," Jokic cracked. "I felt he pushed me too strong."

"If you want to call that foul, especially at that time of the game, it's kind of (expletive), especially because he was hooking me before that foul actually happened," Embiid said.

"I've just seen the foul that was called on Joel and I have no words," Brown said. "When you see that particular play, I have no words. We give them credit. We weren't able to find a way to win on the road."

Denver hung in there with defense until the offense picked up. Will Barton hit two free throws to seal the win.

"Says a lot about this team, the heart," Paul Millsap said. "We want to have the heart of a champion. That's what champions do, they continue to fight. We were able to get some stops."

Jamal Murray, bloody nose and all, had 22 points for the Nuggets, who've won three straight games since coach Michael Malone called out his team for their energy level.

No questioning their energy in this one. Philly hit the first shot of the final quarter to go up 21 and then it was all Denver. The Nuggets didn't take their first lead of the fourth until Jokic's jumper. His 16 points in the final period outscored the Sixers' 13 total points.

The matchup in the middle between two of the top centers in the NBA proved highly entertaining. For once, Jokic got the better of Embiid in the stat that mattered most -- wins. Jokic is 1/3 against Embiid when they both play, according to Basketball-Reference. Jokic was first team All-NBA last season, and Embiid second team.

A breakdown of the numbers: Jokic had 11 rebounds and six assists. Embiid finished with 19 points, 15 rebounds and two assists.

Tobias Harris and Raul Neto each had 13 points for the Sixers, who finished 1/3 on their four-game Western swing. They were without Ben Simmons after he sprained the AC joint in his right shoulder Wednesday in Utah. Neto started in his place.

The 7-foot Jokic lost his cool late in the first quarter after not getting a call when he was grabbed while going up for a shot. Jokic held out his hands in exasperation toward official Scott Wall, who ignored him at first and then issued a technical.

76ers: G/F Shake Milton remained out with a left knee bone bruise/sprain. ... Simmons will be evaluated again before Sunday's game against Charlotte. ... G Trey Burke picked up a technical in the second quarter. ... The Philly bench combined for 37 points, while the Nuggets' reserves had 12.

Nuggets: Millsap played with 11 stitches above his right eye after a collision on a fast-break last game. Wearing a headband, he finished with 15 points.

Malone got to know Embiid through the "Basketball Without Borders" program a few years back. Malone was a coach of the African squad.

"I won't get into the stories," Malone cracked. "Joel has a great personality. He has a great sense of humor. I did enjoy my time being around him in a short period of time during that camp."

Nuggets: In Minnesota on Sunday.