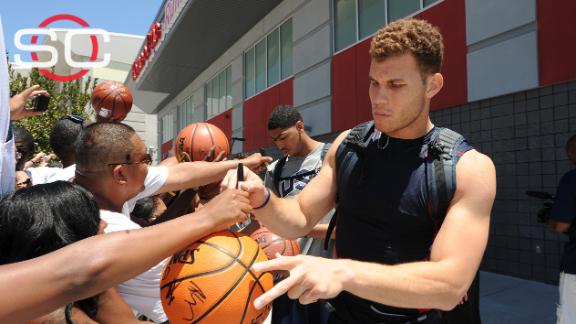 Though still recovering from shoulder surgery, Cleveland Cavaliers forward Kevin Love plans to attend next month's USA Basketball minicamp in Las Vegas to make himself available for the 2016 Summer Olympics, according to league sources.

Sources told ESPN.com that Love will be attending the three-day camp, despite the fact he's not yet healthy enough to participate, in order to meet the conditions established by USA Basketball managing director Jerry Colangelo. Colangelo told ESPN.com earlier this month that any player who wants to be considered for the 12-man squad that will represent the United States in Brazil next summer must make an appearance in Vegas.

USA Today reported Sunday that Oklahoma City Thunder star Kevin Durant, who is working his way back from a stubborn foot injury, also plans to visit the camp for the same reason. Durant wouldn't play in the Aug. 11-13 event on UNLV's campus, but knows he must attend to remain eligible for a spot on the Rio de Janeiro-bound Olympic team.

The New York Post reported earlier this week that New York Knicks star Carmelo Anthony (knee) will be in Vegas as well to make himself available for Olympic selection. Sources told ESPN.com that Dallas Mavericks forward Chandler Parsons (knee) will likewise attend the camp while in the midst of injury rehab, while the Indiana Pacers' Paul George (leg) is yet another player on the road to recovery from injury who is likely to attend but not play.

USA Basketball has scheduled two days of noncontact workouts for the camp and an intrasquad scrimmage on Aug. 13, which will likely take on more of an All-Star Game feel.

ESPN.com's Ramona Shelburne reported early Sunday that the Los Angeles Clippers' Blake Griffin will participate after being forced to withdraw from last summer's FIBA World Cup team to give a back injury more time to heal. Houston Rockets guard James Harden, meanwhile, will also be in attendance in Vegas after playing a key role on the World Cup team, according to ESPN.com's Calvin Watkins.

For what Colangelo has termed more of a "reunion" than a full-speed camp, USAB is inviting the bulk of 34 players who were in the program's roster pool as of last September, as well as a slew of younger newcomers.

The San Antonio Express-News, meanwhile, reported Sunday that newly re-signed star swingman Kawhi Leonard will indeed make himself available for the camp after he bypassed national team invites the past two summers.

One prominent player from last summer's original 34-player USAB pool who appears poised to remove himself from Olympic consideration is Portland guard Damian Lillard, who was one of the last World Cup cuts by Colangelo and Team USA coach Mike Krzyzewski.

In an interview with CBS Sports Radio, Lillard said Saturday he is "probably not going to Vegas" and "doesn't know why [he] would go." After being cut last summer, Lillard said he "doesn't feel like [he's] a part of it."