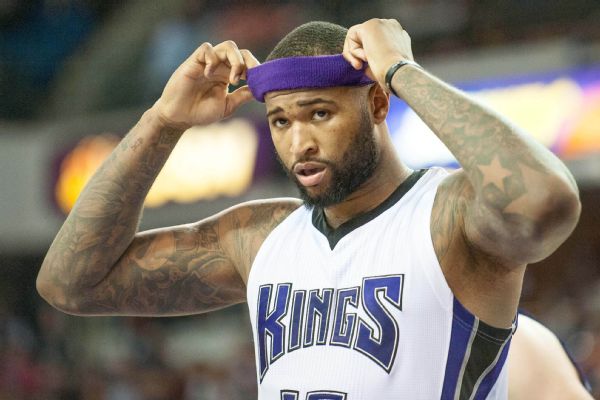 The Sacramento Kings say they are reviewing an incident in which center DeMarcus Cousinsconfronted and shouted obscenities at a local columnist following Monday night's game against theLos Angeles Lakers.

Cousins confronted The Sacramento Bee's Andy Furillo over a column that was published last weekend. The column addressed an incident at a New York nightclub earlier this month that resulted in Cousins and teammate Matt Barnes being sued over an alleged assault. It also referenced an incident at a bar in May involving Cousins and his younger brother, Jaleel, that led to his brother's arrest.

According to The Bee, Monday was the first time Cousins and Furillo saw each other after the column was published.

"We're going to have some real f---ing issues," Cousins said to Furillo. "Don't ever mention my brother again."

A Kings player then stepped between Cousins and Furillo. According to The Bee, Cousins refused to speak to reporters while Furillo was in the room.

In a statement released Thursday, the Kings said they were reviewing the incident.

"We are committed to being open and transparent, and any hint of media censorship is unacceptable," the team said in a statement. "There is an ongoing review into this matter, and we will take the appropriate steps immediately upon its conclusion."

"Professional reporters or columnists and the people they cover will not always agree on what is written or broadcast," Robbins told The Bee in a prepared statement. "But each side should treat the other with mutual respect and professionalism. An overwhelming number of NBA players -- maybe 99.9 percent -- treat the professional news media admirably."

Cousins is no stranger to confronting media in the locker room and elsewhere.

In a video montage of other incidents published by The Bee, Cousins also called out Furillo during a locker room confrontation in October 2015.

Furillo can be heard interjecting with a question as Cousins answered another reporter's question, before Cousins replied with a scowl.

"Not answering your damn questions anyway," Cousins said as he left the locker room. "You like that style?"

Cousins last month refused to speak to reporters until a reporter with Cowbell Kingdom, a member of ESPN's TrueHoop blog network, left the locker room, according to The Bee's video.

"Who you with? Cowbell? You might as well leave," Cousins said, before pointing to the exit as he dressed. "I won't be doing an interview with you. No quotes for him, sorry. Seriously. I won't talk, so."

Cousins then confronted a Cowbell Kingdom writer a week later on the court before a game, approaching him on the sideline as a brief argument ensued during shootaround.