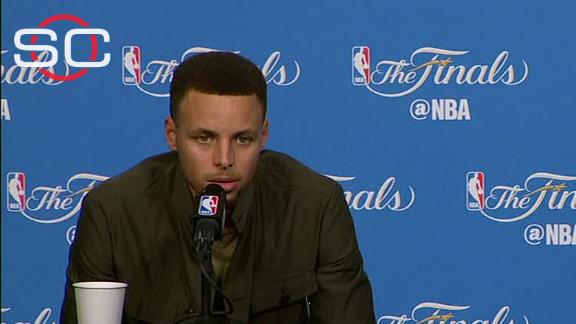 Mozgov's knee hit Thompson as the center set an illegal screen late in the first quarter of the Cavs' 120-90 win.

Thompson was stunned by the play because it happened as he was trailing Kyrie Irvingin the lane, an unusual place for a pick to be set.

"I didn't get it. I don't know. I'm guarding Kyrie, running full speed downhill. I just don't know who is trying to set a pick on me in the middle of the key," Thompson said. "If it's on the perimeter, I understand. But didn't make sense to me."

Thompson returned after getting treatment and finished with 10 points in 31 minutes. After the game, he watched the play on video and was more convinced.

"It seemed kind of dirty to me," Thompson said. "He stuck his knee out too, but, you know what, that's basketball."

Thompson was sore after the game. He said he plans to take practice off and get treatment Thursday and expects to play in Friday's Game 4.

"Obviously didn't feel good, but I'll be all right," Thompson said. "It's the Finals. Nothing's going to keep me out of it."