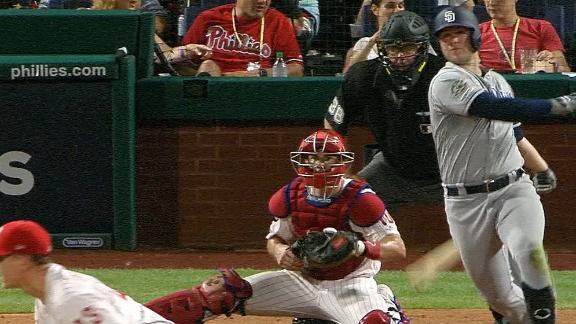 Lamet (2-2) allowed three runs and six hits with six strikeouts and a walk. The 27-year-old was making his eighth start since missing last season due to Tommy John surgery.

"I felt good," Lamet said through a translator. "Every outing I'm feeling better."

J.T. Realmuto homered for the Phillies, who lost for the first time since former manager Charlie Manuel returned as hitting coach on Tuesday. Philadelphia dropped one game out of the second NL wild-card spot.

"He had good stuff," Philadelphia's Corey Dickerson said about Lamet. "He can get it up there 97, 98 (mph) when he wanted it. Good breaking ball. Mixed it pretty well and he threw it for strikes. Throwing it for strikes really helped him a lot."

The Phillies had outscored opponents 30-12 while winning their previous four games, and they had batted .337 with 35 hits, seven homers and 25 RBI in the three games since Manuel joined the staff.

But they managed just six hits against Lamet and three Padres relievers.

"It's a mentality," Lamet said. "And it's the work you put in beforehand, understanding where to attack these guys, where can I get a swing and miss and where can I go to avoid damage so they're not getting their best swing?"

Eric Hosmer had three hits for the Padres, and Josh Naylor tied the game with a two-run double in the fourth.

"We needed that," Padres manager Andy Green said. "Naylor's swing was the biggest swing of the day for us."

Kirby Yates pitched a scoreless ninth for his 34th save in 37 chances.

The Padres went in front with a pair of runs in the fifth off reliever Nick Pivetta (4-5).

Hosmer led off with his third single and scored on France's one-out single to right field. Luis Urias followed and made it 5-3 with another opposite-field RBI single to right.

San Diego tied the game with three runs in the fourth off Phillies starter Zach Eflin.

Pitching against the club that selected him in the first round of the 2012 draft, Eflin was sailing along with two outs in the fourth and Lamet at the plate. But the pitcher singled up the middle and Manuel Margot followed with an RBI single before Naylor's two-run double made it 3-all. Both RBI hits came with two strikes.

"You have to fight down to your last strike and your last out every inning, and I thought we did that really well that inning," Green said.

Said Eflin: "Just horrible two-strike pitches. It's something that I really need to get on top of."

Philadelphia got a pair of runs in the second on Scott Kingery's RBI double and Eflin's RBI single. The Phillies went up 3-0 in the third on Realmuto's 415-foot drive to deep left. It was the 19th homer for the streaking Realmuto, who has homered in four of the last five contests and is batting .522 with four doubles, four homers and nine RBI in his last six games.

Eflin returned to the rotation for the first time since July 27 after being sent to the bullpen due to ineffectiveness. He replaced Jake Arrieta, who will have season-ending surgery to remove bone spurs in his pitching elbow later this month.

Eflin continued to struggle, allowing three runs and seven hits in 3 2/3 innings. The right-hander has a 10.09 ERA in his last seven starts dating to June 24.

Hosmer is hitting .524 in his last five games.

Phillies: Placed OF Roman Quinn on the 10-day IL with a right groin strain. Quinn was hurt trying to beat out a grounder in the eighth inning Friday night. ... The 33-year-old Arrieta, who is 8-8 with a 4.64 ERA in 24 starts, has been trying to pitch through the injury for the last month. ... Right-handed reliever David Robertson had Tommy John surgery Thursday. Robertson was signed to a two-year, $23 million contract in the offseason, but was able to pitch just 6 2/3 innings for the Phillies this year. In addition to being sidelined for the rest of this year, Robertson likely will miss all of the 2020 season.