LeBron James 'will not show any weakness' around Cavaliers teammates 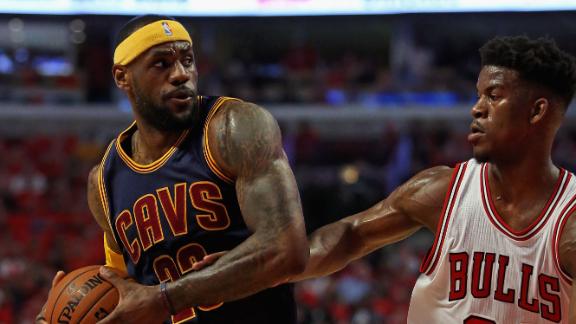 CHICAGO -- In the wake of a devastating loss at the buzzer to the Chicago Bulls on Friday night, LeBron James said he's determined not to show weakness around his Cleveland Cavaliers teammates.

The Cavs, who now trail the series 2-1 heading into Sunday's Game 4, have experienced some misfortune over the last two weeks. They have lost Kevin Love for the season to a dislocated shoulder and now have seen Kyrie Irving become limited with a foot injury that contributed to Friday's loss, when a well-covered Derrick Rose banked in a 3-pointer to give the Bulls a 99-96 win.

"It's an emergency every playoff game. As the leader of the team, I can't be down about anything," James said Saturday after the team had a film session.

"Even though I hate losing -- it was tough for me to sleep last night -- I'm not going to be shattered, not around these guys. They need my leadership more than ever, more than anybody on the team. I will not show any weakness."

The tide has turned on the Cavs since the first quarter of Game 4 in the previous series against the Boston Celtics. After assembling a 34-9 record down the stretch of the season and then cruising toward a sweep of the Celtics, the Cavs appeared to be in position to make a run at the title. Their mojo has been sapped starting with Love's injury, and they've been dealing with blows since, including a suspension for J.R. Smith and a groin injury to Iman Shumpert.

"We've just got to stay with it," Cavs coach David Blatt said. "We've got to continue to believe and trust in each other and our [luck] will turn around."

The injuries have increased the burden on James, who has been forced to handle the ball more, which has allowed the Bulls to focus more of their defense on him. It is a contributing factor to why he is shooting just 36 percent in the first three games of the series, including just 1-of-12 from 3-point range.

But James, who is now playing in his 31st career playoff series, is attempting to set an example by staying positive.

"I've still got really high hopes for this team," James said. "With what we have we can still compete at a high level."