Le'Veon Bell apologizes 'for being distraction' as suspension looms 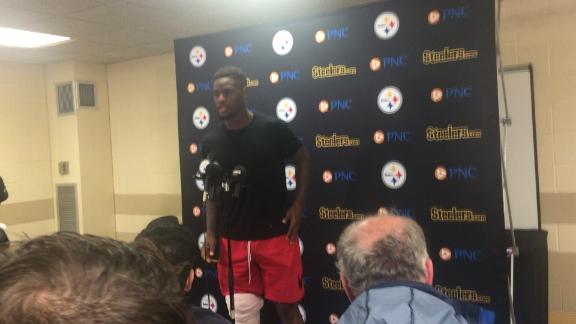 LATROBE, Pa. -- Running backLe'Veon Bellapologized to the Pittsburgh Steelers for the distraction of his looming four-game suspension, but he was generally vague about the issue when addressing the media Thursday at training camp.

Bell, who served a two-game suspension last season after being pulled over with possession of marijuana in 2014, said he was frustrated when he first learned about this punishment in March. But the back is letting his reps and the NFLPA handle the case. He said he understands some will believe he has character issues after two off-field incidents, but said that isn't something he can control.

Bell declined to comment when asked about details of the suspension, citing the ongoing appeal process.

Like Bell, Tomlin said he wants a resolution before commenting further.

"Anything I say prior to that is simply speculation," the coach said.

Guard David DeCastro acknowledged it is frustrating for a contending team to lose players. In addition to losing Bell, who leads all running backs with 119 yards from scrimmage per game since 2013, wide receiver Martavis Bryant received a yearlong suspension over multiple drug-testing violations.

"We're used to it, sadly," DeCastro said of the losses. "You have all this talent and you start losing guys like that. It's tough. But guys step up."

On a positive note, Bell was not listed on the team's physically unable to perform list and is ready to practice less than nine months after tearing his medial collateral and posterior cruciate ligaments last season against the Cincinnati Bengals. The Steelers' staff can manage Bell's reps in practice, but he should be a fixture during camp.

"I'm going to do as much as coach Tomlin lets me do," Bell said. "I'm confident where I am right now. I felt if we had a game tomorrow, I'd be able to play."