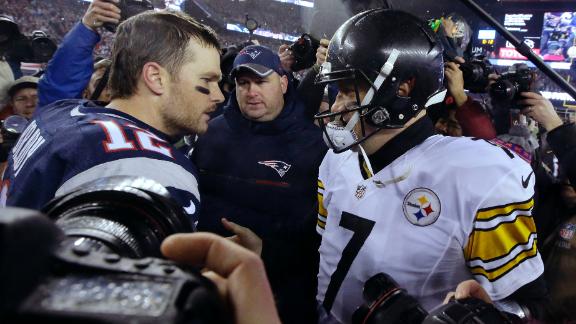 PITTSBURGH -- The Steelers-Patriots clash on Sunday is stocked with major star power.

Bell and Brown have combined for more than 3,000 yards, leading the Steelers to the top of the AFC as of Week 15. Brady leads the league in passing (3,865).

Philadelphia Eagles quarterback Carson Wentz received the most votes among NFC players for fourth overall. Wentz was lost for the season after suffering a torn ACL in his left knee in last week's win over the Los Angeles Rams.

At No. 10, the lone rookie among top vote-getters is Jacksonville Jaguars running back Leonard Fournette.

The Pro Bowl will be played in Orlando, Florida, on Jan. 28 and will air on ESPN.

Bell's leaguewide appeal has grown despite him missing all of training camp before signing his $12.1 million franchise tender.

Bell did not crack the top 10 in last season's voting.

"I wanted to get ready for Game 1, the games that count and go out there and try to win a Super Bowl," Bell said Sept. 4.

The Steelers had an overwhelming presence in the voting with a league-high 20 players finishing in the top 10 at their respective positions. Left tackle Alejandro Villanueva, guard David DeCastro, center Maurkice Pouncey, linebacker Ryan Shazier and special teamer Tyler Matakevich finished atop their positions in the AFC. Ben Roethlisberger finished third in the AFC in quarterback voting.

The full roster -- determined by a combination of fan, player and coach voting -- will be announced Tuesday on NFL Network at 8 p.m. ET.