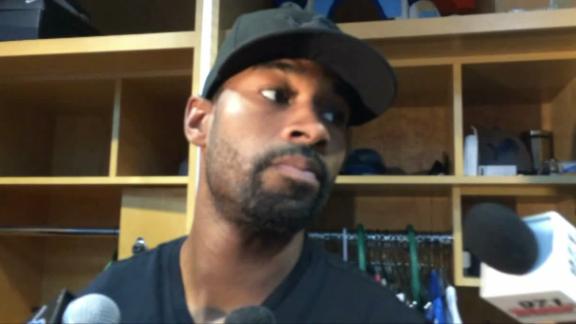 ALLEN PARK, Mich. -- Calvin Johnson said Tuesday he has not gotten to the point where he wants to ask to be traded and that he wants to win with the team that drafted him: the Detroit Lions.

"I want to win here, you know," Johnson said. "This is where I've been. So, definitely want to create a winning culture where I'm at."

Johnson's name had been floated as a possible trade candidate as the NFL's 4 p.m. trade deadline loomed Tuesday. He said he hadn't paid much attention to trade conversation and that he hadn't watched much television leading up the deadline although, to some degree, he "can't help but hear it" because friends and family asked him about it. The 30-year-old, in his ninth season with the Lions, said asking for a trade to another team "hasn't crossed my mind."

"I'm fortunate enough to play in this league, that the Lions took me where I'm at," Johnson said. "They brought me here and I have a great cast of teammates, you know, guys I have been playing with for a long time.

"I love where I'm at right now but definitely want to win."

Detroit has only had two winning seasons during Johnson's tenure -- a 10-6 record in 2011 and 11-5 last season. Detroit made the playoffs both years but lost in the wild card round. Detroit stumbled back to under-.500 the following year both times, going 4-12 in 2012 and sitting at 1-7 with the league's worst record this season.

Johnson said he isn't frustrated with his teammates and that the issues have been little things like communication. But he is disappointed with how the Lions' season has gone thus far.

"It's not where you want to be, clearly," Johnson said. "Definitely expected better. Kind of upset with where you're at right now but the only thing you can do right now is keep putting good film out there."

He did say his ultimate goal, though, is to win a Super Bowl. That's a place the Lions have never been, having won just one playoff game in the Super Bowl era.

"Everybody wants to win the Super Bowl," Johnson said. "That's why we come in and do what we do every year. To try to get to that ultimate prize, so to say."