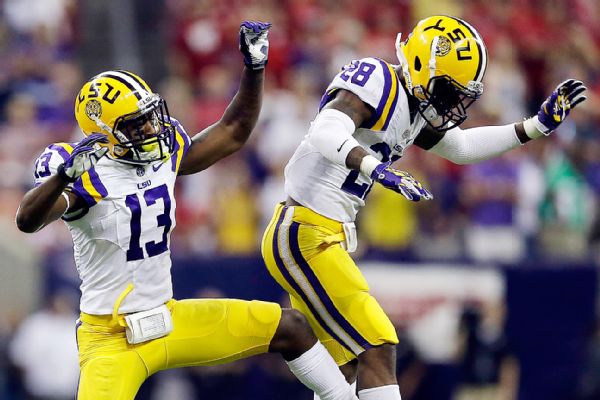 BATON ROUGE, La. -- Dwayne Thomas has watched his LSU team blow late leads each of the past two times Alabama visited Tiger Stadium. The senior defensive back has no intention of allowing that to happen in his final shot against the Crimson Tide.

Even more, he feels like the Tigers' defense can dominate the offense of the nation's top-ranked team Nov. 5.

Alabama's overall winning streak in the series is five games.

Although Crimson Tide freshman quarterback Jalen Hurts has been exceptional, becoming a Heisman Trophy candidate for the nation's top-ranked team, Thomas reminded reporters that Hurts has yet to play at Tiger Stadium -- or against LSU's resurgent defense.

The Tigers handled Ole Miss and all-SEC quarterback Chad Kelly last Saturday, shutting out an opponent in the second half for the second straight week. Thomas believes they can do the same to Hurts.

"After hitting him a couple times, most quarterbacks don't like to get hit," Thomas said. "They start making mistakes after that, and then with the tight coverage that we're going to have on the back end, he's not going to want to go to some of his favorite targets. That's all we have to do. I really see us dominating this offense. I really see us dominating this team."

Thomas realizes predicting his team will dominate an opponent that has won three of the past five national titles will create a stir. The knowledge that his comments could be posted throughout Alabama's locker room didn't seem to bother him.

"We put stuff up, too, over here," Thomas said. "If that helps to motivate, if that helps motivate them, then so be it. We know what motivates us, and that's we want that No. 1 that's next to their [name]. We want it. We want it next to our LSU."

The Crimson Tide have pulled out late wins in their past two trips to Tiger Stadium.

In 2012, Alabama scored the winning touchdown with 51 seconds remaining. And in 2014, Alabama hit a field goal with 3 seconds left to force overtime.

"Those are some great [Alabama] teams also," Thomas said. "But this year, I feel like we're not going to put ourself in harm's way to give them anything. We don't turn the ball over on offense and we get turnovers on defense and we make first- and second-down stops, we should come out on top in this game."
Related topics:
sportsespncollege footballlsu tigersdwayne thomasalabama crimson tidebamaroll tide
Copyright © 2022 ESPN Internet Ventures. All rights reserved.
TOP STORIES
DA: Person shot, killed by officer after struggle in Malvern, Pa.
CDC advisory panel greenlights booster shots for children ages 5 to 11
Rihanna and A$AP Rocky welcome their first child
FTC warning: Baby formula scammers are preying on parents
What is monkeypox? What to know after US confirms 1st 2022 case
Eagles have a loaded roster, but will QB hold them back?
Delco bus driver accused of taking upskirt photos of students
Show More
Rise in brazen thefts force convenience stores to close
Blasian Solidarity unites Philly's Black, Asian communities for good
5 people shot in North Philadelphia near Temple University
Ford recalls SUVs due to engine fire risk
Newlyweds mark big day with fiery stunt
More TOP STORIES News