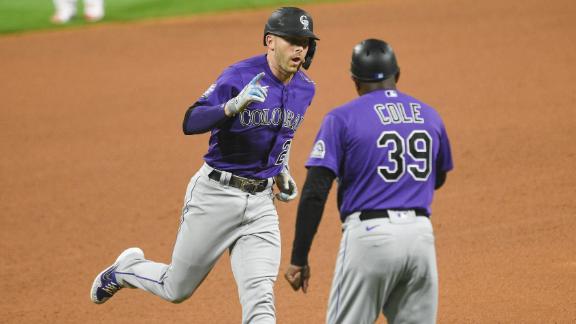 Trevor Story and C.J. Cron also homered for the Rockies, who won for the second straight night at Citizens Bank Park and improved to 20-50 on the road.


Didi Gregorius homered and Bryce Harper had a pair of hits and an RBI for the Phillies, who have lost four straight and six of eight. Philadelphia fell 4 games behind first-place Atlanta in the NL East.

Harper said he was embarrassed by Philadelphia's performance.

"We just got beat by the Colorado Rockies twice. We got blown out today," he said. "Irritation is there. Embarrassment is there as well. It's not good the way we're approaching the game, the way our at-bats are going, the pitching, everything, it's just not good."

The MVP candidate said the Phillies need to play like a team.

"We just need to be better, that's the simple truth," he said. "We need to be better pitching, hitting, guys playing every single day, being a team, being a whole, not worrying about individual numbers. You can't worry about any of that stuff. Worry about us as a team as a whole, what you can do to make the team better."

Márquez (12-10) was sharp for the Rockies, scattering six hits with six strikeouts and a walk. He struck out a frustrated Harper on a curveball with two on and two outs in the fifth.

"That was a key moment," Rockies manager Bud Black said. "We felt it in the dugout."

It looked as if the Phillies were in good shape to make up ground on Atlanta when they began a stretch on Thursday of 14 of 17 games at home against teams that were a combined 113 games under .500. But Colorado followed Thursday's 4-3, ninth-inning comeback victory with a romp.


A dejected Phillies manager Joe Girardi was terse in his postgame comments.

"I'm just not happy, I hate to lose," Girardi said. "I don't really want to get into it publicly, but I'm not happy with the way we're playing."

Girardi seemed to indicate Philadelphia is playing too much for the long ball.

Frustration boiled over for the Phillies when Brad Miller slammed his bat into a dugout rack six times after being called out on strikes in the eighth inning.

Díaz put an exclamation point on the blowout with a one-out slam to left in the ninth off J.D. Hammer, one of seven Phillies pitchers used in a bullpen game. By then, there were just a smattering of boos from the small contingent of the 22,138 fans remaining.

Story and Cron went deep in consecutive at-bats in the seventh off Ramon Rosso to make it 6-0 and bring a chorus of boos from the unhappy home fans.

Sam Coonrod was the opener for Philadelphia and pitched a scoreless first inning, but the Rockies got to Bailey Falter (2-1) in the second.


Sam Hilliard got Colorado on the board with an RBI single after a pair of one-out walks by Falter. Yonathan Daza followed with a run-scoring double that ended Falter's night. Márquez greeted Cam Bedrosian with an RBI single to make it 3-0 and seemed to take the life out of the Phillies.

Gregorius kept the Phillies from getting shut out by leading off the ninth with a home run against Ben Bowden.

The Phillies, as they have done all season, put the Homer Hat on Gregorius when he entered the dugout down 11-1 in the ninth.

Asked if that didn't sit well with him, considering the situation, Girardi said, "I don't really care about the hat."

Phillies RHP Zack Wheeler (12-9, 2.91) takes the mound against Rockies LHP Kyle Freeland (5-7, 4.69) for the third contest of the four-game series on Saturday night.