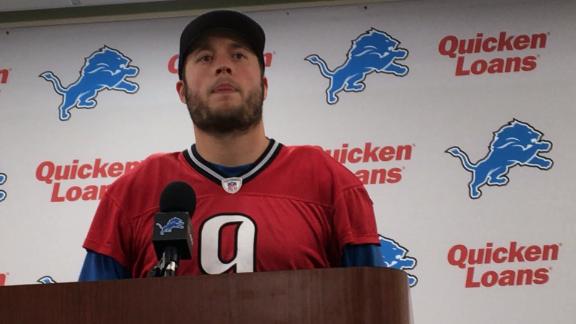 ALLEN PARK, Mich. --Detroit LionsquarterbackMatthew Stafford has thrown four interceptions in three games since he injured the middle finger on his throwing hand, necessitating the use of a glove.

Stafford, however, said the finger has been fine while throwing the ball.

"I don't think so," Stafford said Wednesday when asked whether the finger was a problem. "You know, you look back at [the interceptions] and maybe the one in Chicago was a poor throw, behind him. For the most part, it's been more [decision-making] or close [plays] here or there.

"So it's something that obviously I'm trying to eliminate as much as possible," he said of the turnovers, "while still staying aggressive."

Stafford has completed less than 62 percent of his passes in each of the past three games. He completed a season-low 56.5 percent in Monday's loss at Dallas.

Although he downplayed it, Stafford has been hit more. The past two weeks, he has been hit 14 times and sacked five times, including four versus the Cowboys.

Stafford also lost a fumble late against the Cowboys and has thrown some near-interceptions in those games.

"Turnovers ... certainly make a difference in the ballgame, and there's a lot of stuff that goes into it," Lions coach Jim Caldwell said. "It's not necessarily his injury or anything of that nature, I don't think, but the really important thing is for us to make certain that we get out of that and get ourselves in position to play well."