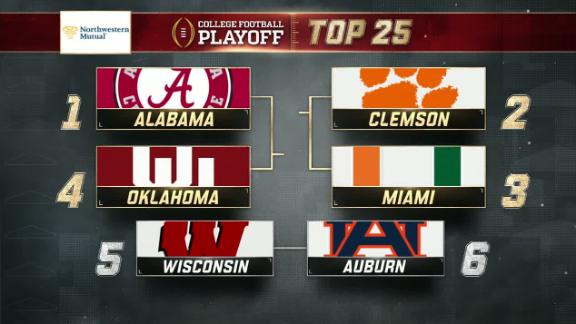 Georgiais out, Miamiis in and Oklahomafinally has a seat among the top four in the College Football Playoff rankings, which were announced Tuesday night.

Alabamatakes over at No. 1 after the previous top-ranked team, Georgia, lost by 23 points toAuburnon Saturday. The Tigers are now sitting at No. 6 and are two weeks away from an Iron Bowl clash with the Crimson Tide.

Clemsonalso benefited from Saturday's shake-ups, going from No. 4 to No. 2 following losses by Georgia and Notre Dame.

After Clemson, at No. 3, is the team that knocked off Notre Dame -- Miami. The Hurricanes nearly wore out their turnover chain with four takeaways in a 41-8 drubbing of the Fighting Irish on Saturday.

As a result of the loss, Notre Dame tumbled from No. 3 to No. 8 -- one spot behind Georgia -- but the Irish's hopes of making the CFP are likely dashed.

Wisconsinchecks in as the highest-ranked Big Ten school at No. 5. The Badgers (9-0) have plowed their way through a weak schedule and might need a top-four team to lose in order to make the jump into a playoff position, even if they win out.

Auburn sits at six, one spot ahead of the team it took down on Saturday, Georgia. The Bulldogs fell from No. 1 to No. 7 after Saturday's 40-17 loss, but the Bulldogs still could have a path to the playoff if they win the SEC title game.

The pair of SEC squads are followed by two teams from the Big Ten, Ohio Stateand Penn State, which are ranked Nos. 9 and 10, respectively. They are followed by the highest-ranked Pac-12 team, USC.

TCU, at No. 12, is followed by another Big 12 team, Oklahoma State, which came away with a 49-42 win overIowa Statethat knocked the Cyclones out of the CFP rankings altogether.

After the Cowboys isWashington StateandUCF. The Knights are the highest-ranked team from the Group of 5.

Mississippi State, which came close to upsetting Alabama, sits at No. 16 and is followed by Michigan State, Washingtonand NC State.

Stanford, Michigan and Boise State are new to this week's CFP rankings. 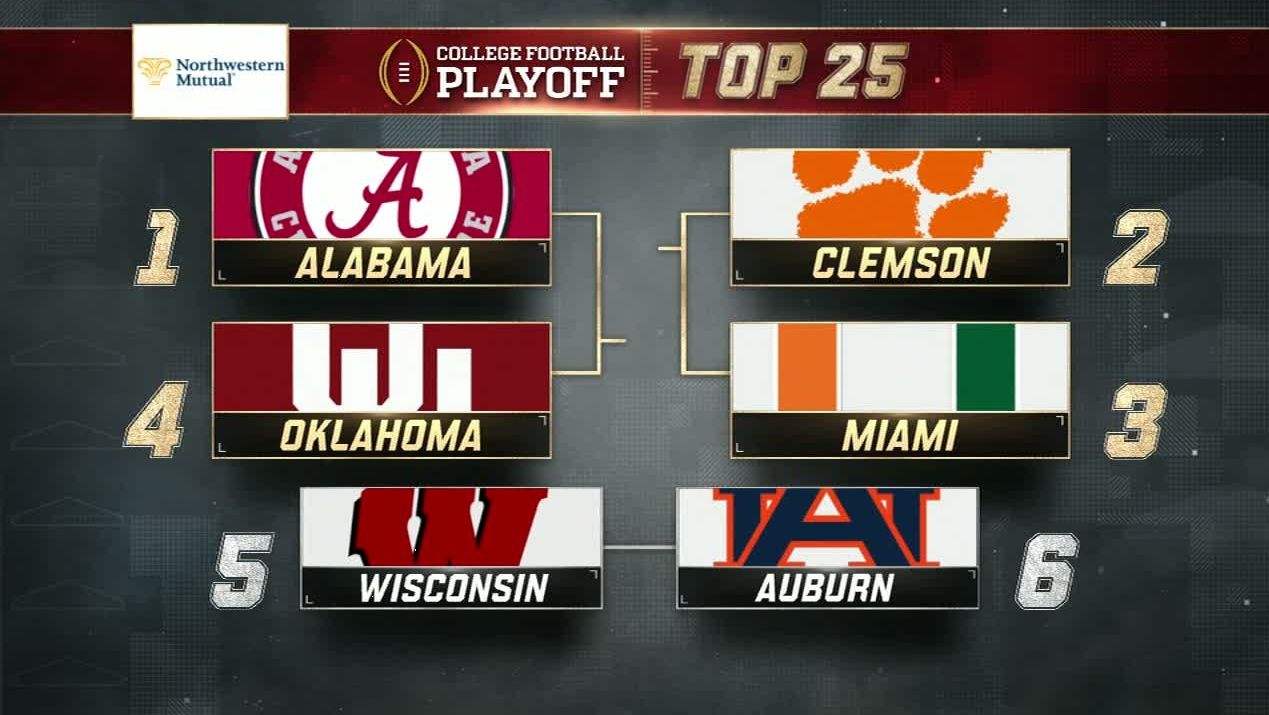