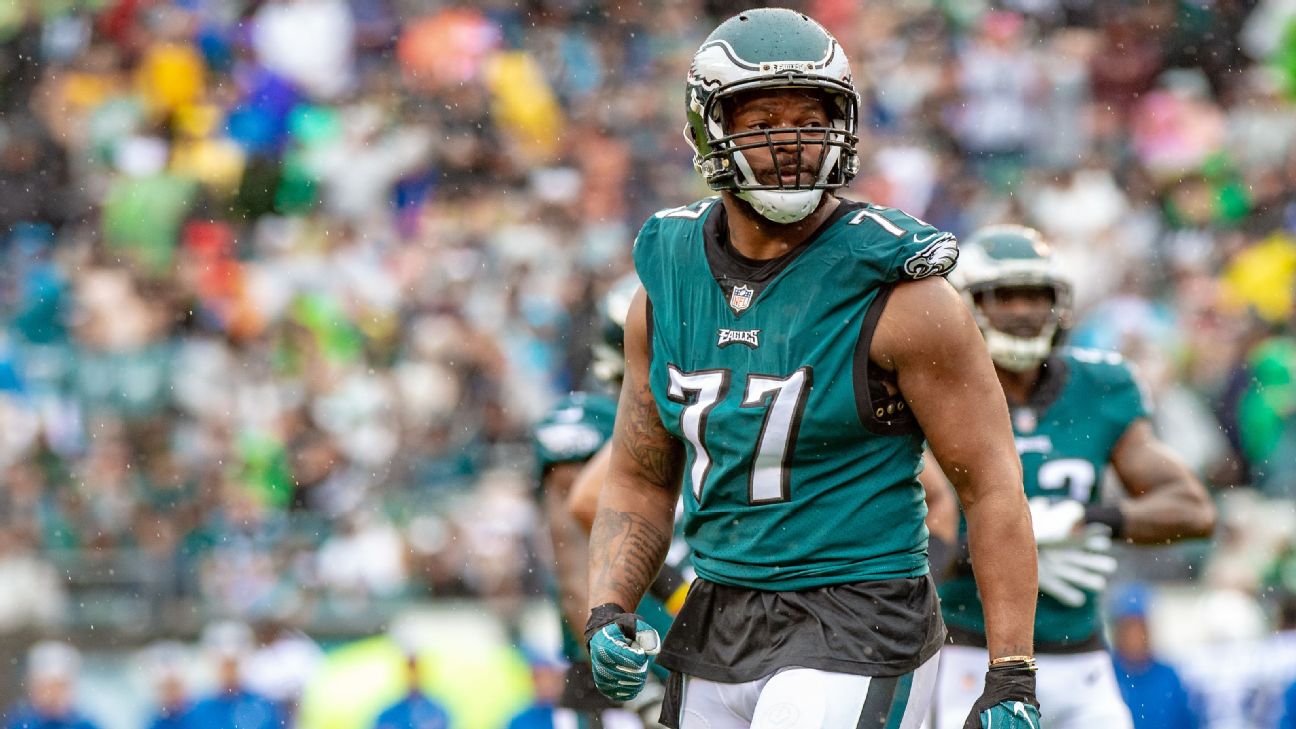 PHILADELPHIA --Eaglesdefensive end Michael Bennett acknowledged that adjusting to his new role in Philadelphia has been a "test of character" but made it clear during his first interview in weeks that he is putting team first.

One of the things Bennett is getting used to is playing fewer snaps. He has been on the field for just under 55 percent of the defensive plays so far in 2018, compared to about 85 percent last season for the Seattle Seahawks, which was tops on the team among defensive linemen.

He notched his first sack of the season Sunday against the Tennessee Titans. That puts him on pace for four sacks for the season, which would be his lowest output since 2011 if it holds. He had 8.5 sacks for Seattle last season. He was traded along with a seventh-round pick to the Eagles for a fifth-round pick and wide receiver Marcus Johnsonin March.

It was suggested during the broadcast of the Eagles' opener against the Atlanta Falcons that Bennett was not pleased about being a backup, but Bennett, who has declined to speak with reporters for the past several weeks, said Thursday he was just happy to be in a situation where the team was capable of having success.

"You always want to play more, but in this situation you just want to win," he said. "When you have a good quarterback, a good running game, you just want to win the game. We have a great defense, and I think for me it's just wanting to win a championship. Playing with some great players, and the opportunity to play here is always a blessing."

The other big adjustment for Bennett is that he has been moved to the right side of the line after spending much of his career on the left.

"It's like writing with your left hand for 10 years and then they tell you to write with your right hand," he said. "It's harder, right?"

But he feels like in time, he'll get it down. Bennett, who has operated both from the edge and interior at times this season, has been effective despite the reduced role. He is tied for second on the team with 13 quarterback pressures behind only Cox.

Coaches say that they are focused on keeping the 32-year-old Bennett fresh so that he's at his best late in the year.

"We're 2-2 so the most important thing is not my individual stats or individual playing time, it's really about the wins," he said. "To me, it's just about winning. That's the true test of character is how many W's you can get."
Report a correction or typo
Related topics:
sportsespnmichael bennettnflphiladelphia eaglesdefensive end
Copyright © 2020 ESPN Internet Ventures. All rights reserved.
More Videos
From CNN Newsource affiliates
TOP STORIES