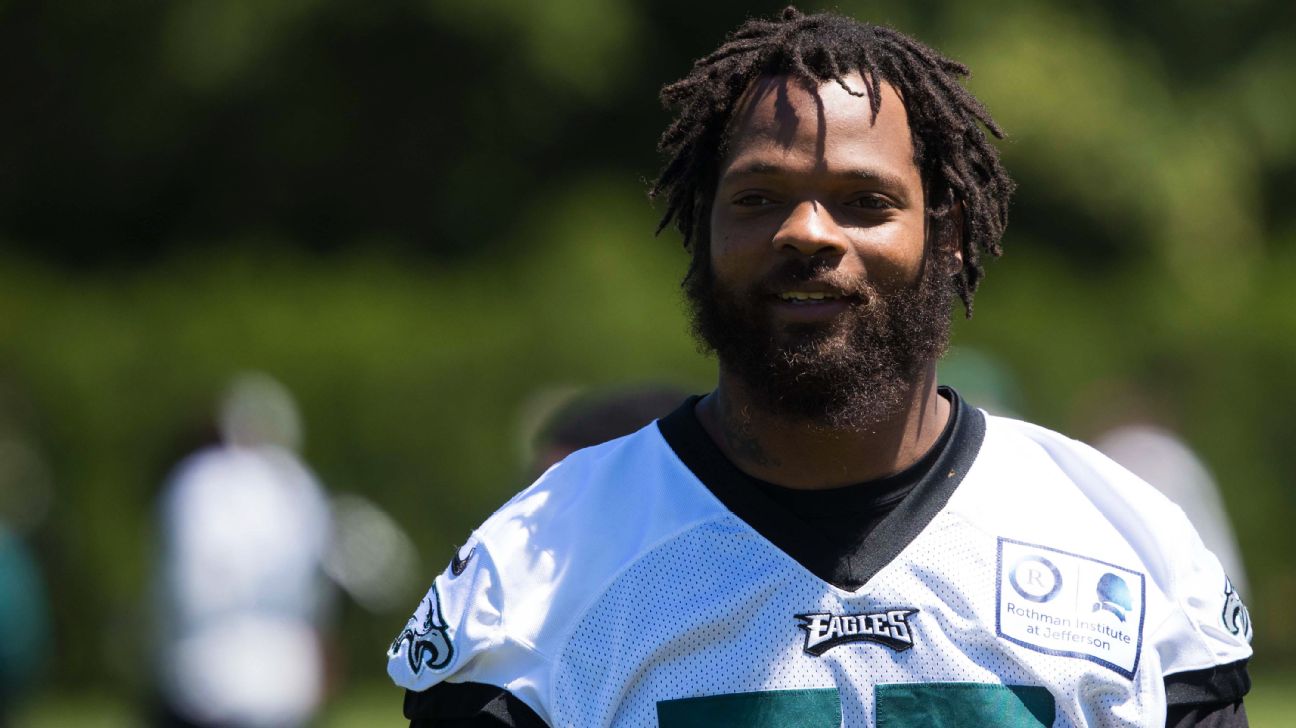 PHILADELPHIA -- New Eagles defensive end Michael Bennett was typically candid when asked why he didn't participate in organized team activities this spring, noting that the NFL "is the only job in the world that's voluntary and they expect you to show up."

Tuesday was the start of mandatory minicamp, so Bennett was in attendance. Now that he is back practicing, he appeared eager to keep the focus on the football field following a turbulent few months off it.

Bennett, 32, was traded from the Seattle Seahawks to the Eagles in March for wide receiver Marcus Johnson and a fifth-round pick. Two weeks later, a grand jury in Harris County, Texas, indicted him on a felony charge of injury to the elderly related to an incident at NRG Stadium following Super Bowl LI. He turned himself in a short time later and was released on bail. His next court hearing is scheduled for June 27.

"I just let my lawyer handle that and just do what I need to do on the field," he said when the legal matter was brought up. "Me being here, it's all about football and trying to be a great player, be a great teammate and be a great citizen."

Similarly, he declined to weigh in on the cancellation of the Eagles' White House visit or answer how the new anthem policy might impact his pregame decision-making in 2018.

His new team and new city, meanwhile, were topics he was more expansive on.

Bennett was in Philadelphia at some point this spring but spent most of his time away from the facility. He said he views the offseason as a time to be "a better parent, a better husband," so he focused on "working with my kids, teaching after school, coaching basketball and doing whatever I can to help out."

He worked primarily with the second unit during practice Tuesday, despite the absence of Brandon Graham, who is recovering from ankle surgery. Bennett is still in the early stages of learning the terminology.

"It will be tough, I think, with three days of work," coach Doug Pederson said when asked what he expected to see out of Bennett during these sessions. "But he's a veteran guy, not worried too much about where he's at right now. It's exciting to be able to have everybody out there and to see all the pieces for these next couple of days and then get them back here for camp in July."

Bennett posted 8.5 sacks for Seattle last season while playing through plantar fasciitis. He's expected to be a heavy part of defensive coordinator Jim Schwartz's D-line rotation, attacking from both the outside and inside, to help make up for the losses of Vinny Curry and others. Although he is entering his 10th NFL season and new to a championship team, the three-time Pro Bowler said his expectations remain high.

"Coming in here, you want to be an All-Star just like you've been. You want to be able to be one of the top players in the league," he said. "If you come in with that, I think the organization is expecting that. They're not expecting me to come in and just sit back. They're expecting me to come in and dominate on the field. That's my job."
Report a correction or typo
Related topics:
sportsespnmichael bennettnflphiladelphia eagles
Copyright © 2020 ESPN Internet Ventures. All rights reserved.
More Videos
From CNN Newsource affiliates
TOP STORIES