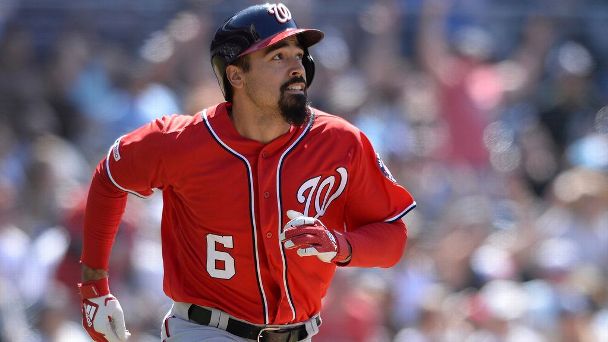 Among this weekend's most interesting matchups are a clash of the NL East's top two teams, a showdown of exciting shortstops in Chicago and a host of games involving teams with deadline decisions that could be determined by their play on the field.

Here's what we're most excited to see:

The Braves and Nats meet this weekend (Sunday Night Baseball, 7 ET on ESPN). Is the NL East race over, or is the door still open for someone to catch Atlanta?

David Schoenfield: Thanks to their deep lineup and current comfortable lead, the Braves are heavy favorites at this point -- 77% chance of winning the division, according to FanGraphs -- but the door is certainly still unlocked. The first game of this series on Thursday was the first of 14 remaining games between the Braves and Nationals -- plenty of head-to-head matchups for the Nationals to make up ground.

The Nationals have been hot, but cleaning up on the likes of the Tigers, Marlins, Royals and Orioles isn't exactly like pitching to Freddie Freeman with two runners on in a clutch situation. (Yes, that's a reference to the Nationals' bullpen, which needs at least a couple of additions before the trade deadline.) Who will win? I'd have to go with the odds at this point and pick the Braves, but I think we'll end up with a close race. (Yes, I'm stubborn in my belief in the Nationals, which is kind of like speculating in tulips in Holland in 1637.)

Eddie Matz: Si, la puerta esta abierta. But I wouldn't call it wide open. Yes, the Nats have been as good as any team in baseball over the last eight weeks. And yes, they have a whopping 14 games remaining against the Braves. But as Wednesday's come-from-ahead loss to the lowly Orioles proved, Washington has some serious bullpen issues (as if we didn't already have enough proof). The good news is, GM Mike Rizzo still has time to go out and acquire a couple of doorstops -- I mean, relievers.

We're less than two weeks from the trade deadline; which teams are you watching closely on the field to see if they should buy or sell?

Matz: Every National League team that's not currently leading its division, except the Marlins. You could make a case (and by "you," I mean "I") that all 11 of those teams should sell. Or that they should all buy. Among that group, no team is more intriguing (and by "intriguing," I mean "confusing") than the Giants. A couple weeks ago, they had S-E-L-L written all over them and were going to be to the reliever market what Kleenex is the tissue market. All of a sudden, they can't lose and are threatening to turn the wild-card race into a berserk-card race. It's literally keeping me up at night. (And by "literally," I mean "figuratively.")

Schoenfield: The Rockies and Padres have stumbled out of the gate coming out of the All-Star break -- or, in the Rockies' case, stumbled and fallen off a cliff -- which, if not necessarily making them sellers, certainly makes them more unlikely to be buyers. I have a hard time believing the Indians will trade Trevor Bauer and Brad Hand when still in the thick of the wild-card race and within sight of the Twins.

That leaves two teams that will be most intriguing to watch between now and July 31. The Reds are in last place in the NL Central, but are still close and have that positive run differential that suggests they've underperformed (Raisel Iglesias is now 2-8 after losing Tuesday). They also have two of the most interesting players available, if they do decide to sell, in Tanner Roark and Yasiel Puig.

Then we have the Mets, who have seen their chances of making the playoffs dip below 10 percent. They need a hot two weeks just to climb back into the wild-card race. Can they trade Zack Wheeler, who is on the injured list with shoulder fatigue (but could return before the deadline)? Will they trade Noah Syndergaard? Will they admit defeat on what looks more and more like a lost season? Best bet: Trade Wheeler, keep Syndergaard.

Two of the most exciting shortstops in baseball will be at Wrigley this weekend. Will Fernando Tatis Jr. or Javy Baez have more hits in the series?

Schoenfield: Hey, I'm the guy who told a colleague recently that Tatis' FLOOR is Javier Baez. That's not a knock on Baez. That's praise for Tatis, who has produced 3.4 WAR through his first 59 games -- that's 8.6 over 150 games. And he's 20 years old! Why are still so worried about the future of baseball with players like this? Of course, none of that has anything to do with who will get more hits in this series and the Padres' starting pitchers have struggled of late. So Baez with more hits this weekend and Tatis in value over the next 10 years.

Matz: Oof. Both have been better against lefties (both teams start two southpaws this weekend). Both have been better at the applicable venue (home for Baez, away for Tatis). And both come into the series neither particularly hot nor cold. They're basically twins. Except that Baez came into the world six years before. Which means that his legs are six years more tired. I'll take the guy with the fresher wheels. (Tatis, in case you're wondering.)

The Dodgers are throwing their three aces -- Ryu, Kershaw and Buehler -- against the low-scoring Marlins this weekend. How many runs will Miami score total in the three games?

Matz: Reverse lock alert! Despite the daunting matchup, the Fish explode ... for a total of 14 runs. (Hey, that's about three more than their average suggests.)

Schoenfield: The Marlins have been shut out 14 times already -- no other team has been blanked more than nine times. What's weird is they also have these random wild games -- 19 hits and 16 runs; 18 hits; they just put up 12 runs on the Padres. They have nine games with 15-plus hits, fifth most in the majors. But they will hit the Dodgers? No, they will not. They will score six runs in three games.

Each week, we ask our panelists to choose one hitter they think will hit the most home runs and one pitcher they think will record the most strikeouts in the coming weekend. Panelists can pick a player only once for the season. We'll keep a running tally -- and invite you to play along at home. 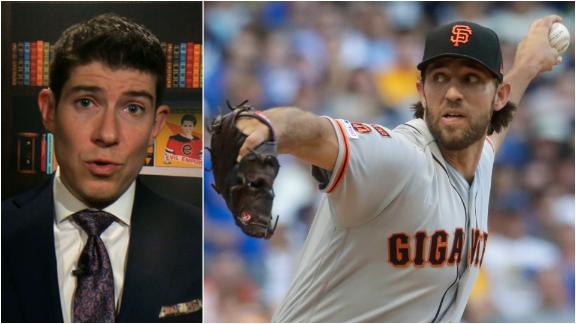