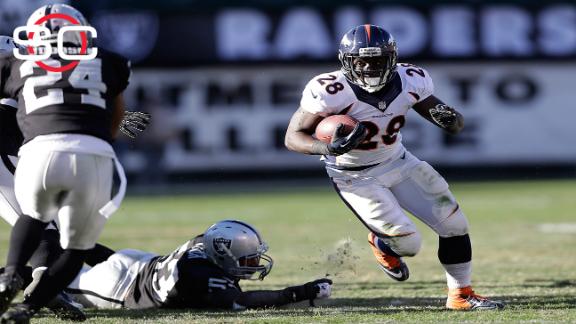 ESPN
ENGLEWOOD, Colo. -- Montee Ball is confident his current comeback will turn out just like the last one.

As a sophomore at Wisconsin in 2010, Ball leapfrogged John Clay and James White on an October afternoon at Iowa and scored the winning touchdown in the closing minutes of a 31-30 win.

It came just one week after he'd sat out a big win over top-ranked Ohio State, but he'd never back up anyone again in college, finishing with an NCAA-record 83 touchdowns.

Ball once again finds himself buried on the depth chart, this time behind C.J. Anderson and Ronnie Hillman in Denver, and he envisions a similar story unfolding.

The Broncos' third-year running back predicts -- not smugly but almost sheepishly -- that he'll surpass Hillman and unseat Anderson, whose spectacular second half of 2014 earned him a Pro Bowl berth and the Broncos' starting tailback job.

"C.J. deserves the No. 1 spot right now. I'm most definitely going to try to work to get it back. And I believe that I will," Ball told The Associated Press during a break at minicamp this week. "I like coming in and being the underdog, just keeping my head down, my mouth shut and just working."

The clear-cut starter a year ago at this time after rushing for a 4.7-yard average his rookie year, Ball never regained his explosiveness or his starting job after undergoing an emergency appendectomy in August.

Ball blames the three-week layoff for weakening his core, which he believes in turn led to the torn right groin that landed him on injured reserve, limiting him to a paltry 172 yards on 55 carries for a 3.1-yard average and a single TD in 2014.

Ball was glad to put last season behind him.

"Last year was just all bad, starting with the appendectomy," said Ball, who has spent the past three months working on his flexibility with a personal trainer and also a Pilates instructor.

Ball said he began feeling better in February, and the hiring of new coach Gary Kubiak sure helped his endorphins kick in.

"It's a way more balanced offense and he has a huge emphasis on the run game. As a running back you've got to love that," Ball said. "So, I do believe I'm the perfect fit for this system."

Ball said he's back to his pre-injury form and is sure he'll feel even better once he finds a local Pilates instructor to help keep his body pliable and his frame flexible so he can avoid another season like the one he endured last year.

"I started off hurt last year, and I was hoping it would go away and it didn't," Ball said. "But I know what I'm capable of doing when I'm fully healthy."