More 'Bryce Harper moments' would be great for baseball 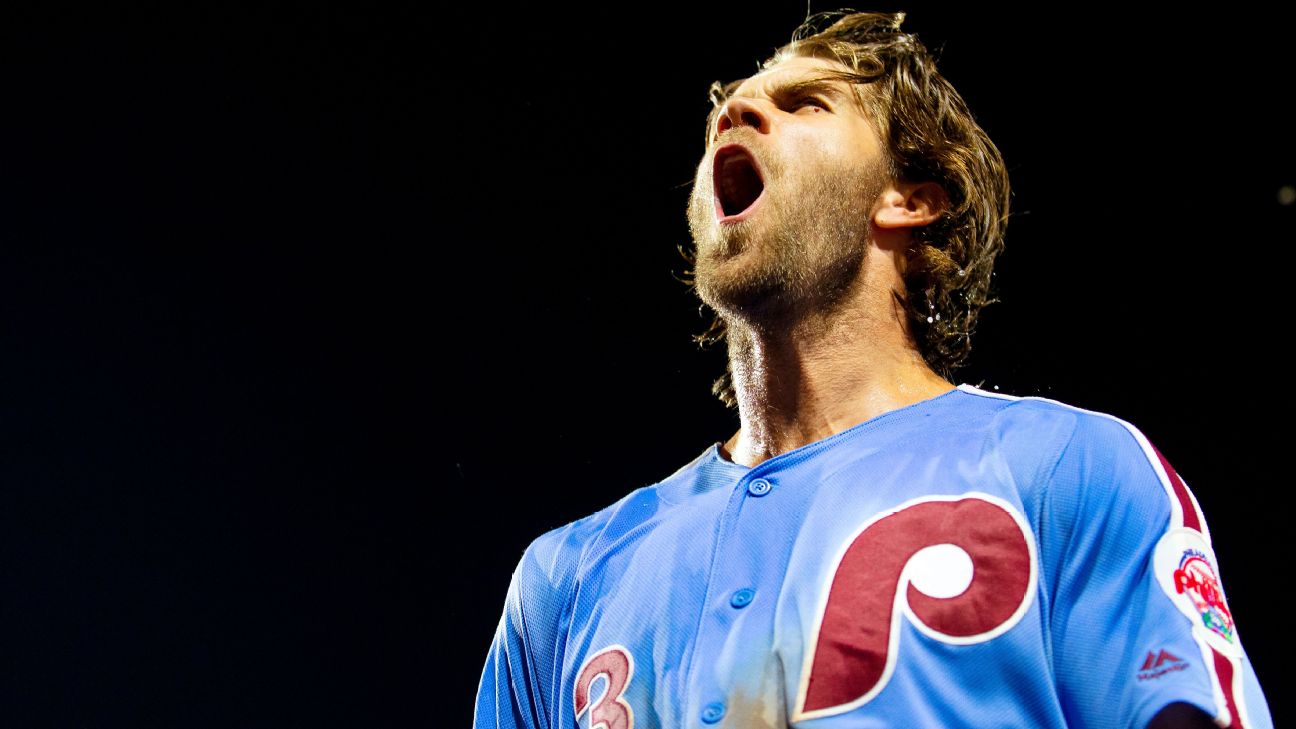 ESPN
By David Schoenfield
Will this be the moment? Can one swing, one 413-foot home run launched at 113 mph and 40 degrees into the night sky in Philadelphia turn around a season? Maybe turn around the trajectory of the next 13 years?

That, no doubt, is an overly dramatic reading of the events that unfolded Thursday night in the bottom of the ninth in thePhillies' 7-5 win over theCubs, but Bryce Harper's walk-off grand slam to cap a six-run rally was one of the signature moments of the season. Harper admired his towering fly ball that landed in the second deck, then sprinted around the bases in 19.27 seconds, smiling and laughing and screaming as if running for a gold medal, Phillies announcer John Kruk exclaiming "OH MY GOD," the fans going bonkers, Harper's teammates mobbing him at home plate.

Is this a great game or what? The highs and the lows, the joy and the despair, or as Chicago radio host Julie DiCaro tweeted, "#cubs group therapy tonight":

When Jean Segura flied out to begin the bottom of the ninth with the Phillies trailing 5-1, their win expectancy fell to 0.6%. Then, insanity. Cubs shortstop David Bote booted a ground ball. Scott Kingery singled. Brad Miller singled on an 0-2 pitch. Joe Maddon brought in Pedro Strop. Roman Quinn singled to make it 5-3. Strop hit Rhys Hoskins with a 1-2 fastball. Maddon brought in lefty Derek Holland to face Harper with the bases juiced and the crowd on its feet.

Fourth pitch: Changeup in the dirt

After the game, Harper explained his home run to MLB Network: "Knowing his sinker was his best pitch, kind of cheated the best I could on the inside part of the plate and was able to keep it fair."

Indeed, this was Harper at his best. Hanging in there on a couple of tough pitches, laying off the offspeed stuff out of the strike zone, and then anticipating a particular pitch and guessing right. Beautiful.

Is this the start of something for Harper? He went 3-for-3 with two home runs Wednesday, the middle game of the Phillies' three-game sweep of the Cubs. He's hitting .259/.385/.648 in August with seven home runs and 15 RBIs in 14 games. Even though his overall numbers can be viewed as a disappointment, Harper actually has been pretty clutch all season, entering the evening ranked fifth among hitters in win probability added, behind Christian Yelich, Mike Trout, Cody Bellinger and Freddie Freeman.

We know Harper is capable of going on a tear for weeks at a time, even if he has struggled to maintain consistent power while also hitting for average over the past two seasons. It would certainly be good for the sport to have Harper doing exciting things down the stretch. A Harper walk-off grand slam is going to get a lot more attention than your typical walk-off grand slam, and given the state of Philadelphia's bullpen and with Jake Arrieta likely to have season-ending elbow surgery, the Phillies need Harper to step up the final month and a half.

I hope it happens.

As for the Cubs, it was an absolutely crushing defeat as they fell to 23-38 on the road. Anthony Rizzo said it was their toughest loss of the season:

On the bright side: The Cubs are still tied for first place in the NL Central. It just doesn't feel like it after a night like Thursday.

Alonso ties rookie record: TheMetsturned a blowout win over theBravesinto a nail-biter, holding on for a 10-8 victory after the Braves scored four runs in the bottom of the ninth and brought the tying run to the plate. The Mets pounded 23 hits, hit two home runs, had two players (Pete Alonso and Amed Rosario) get five hits in the same game for the first time in franchise history ... and still nearly blew the game. Does anybody have a good bullpen right now?

Alonso went 5-for-5 with six RBIs, including his 39th home run, tying Bellinger's National League rookie record set in 2017. Alonso is only two away from tying the Mets' club record, shared by Todd Hundley and Carlos Beltran. He remains one behind Bellinger, who hit his 40th home run, for the league lead, so he has a chance of becoming only the fourth rookie to lead his league in home runs (Aaron Judge in 2017, Mark McGwire in 1987 and Ralph Kiner in 1947).

The play of the game, however, was Ronald Acuna Jr. robbing J.D. Davis of a home run ... and then pretending he didn't make the catch:

Crooked numbers everywhere: It was one of those nights. In fact, there were 48 home runs in 10 games. That 4.8 HR per game average is the most all time in a day with at least 10 games played, according to Elias Sports research. Some of the highlights:

--Indians19,Yankees5. The Indians scored seven in the top of the first, knocking out opener Chad Green after one out and five runs. They pounded seven home runs -- tying the record for most against the Yankees in a game. (The only other time the Yankees gave up seven homers was July 4, 2003, against the Red Sox.) Maybe nobody sums up baseball in 2019 better than Cleveland catcher Roberto Perez. He hit .168 with two home runs last year and entered the season with 21 career home runs in 818 at-bats. He hit his 20th of the season, in 296 at-bats.

--Twins13,Rangers6. The Twins hit three more home runs to remain a half-game ahead of Cleveland in the AL Central.

--Marlins13,Dodgers7. You wouldn't expect the Marlins to score 13 runs in a game started by Walker Buehler, but they scored five runs off him in four innings and tacked on a bunch more against the bullpen. Amazingly, they didn't hit a home run -- and the Dodgers hit four.

--A's7,Astros6. Four players had multihomer games (Houston's Carlos Correa and Michael Brantley, Oakland's Matt Olson and Matt Chapman), something that has been done only four times before. 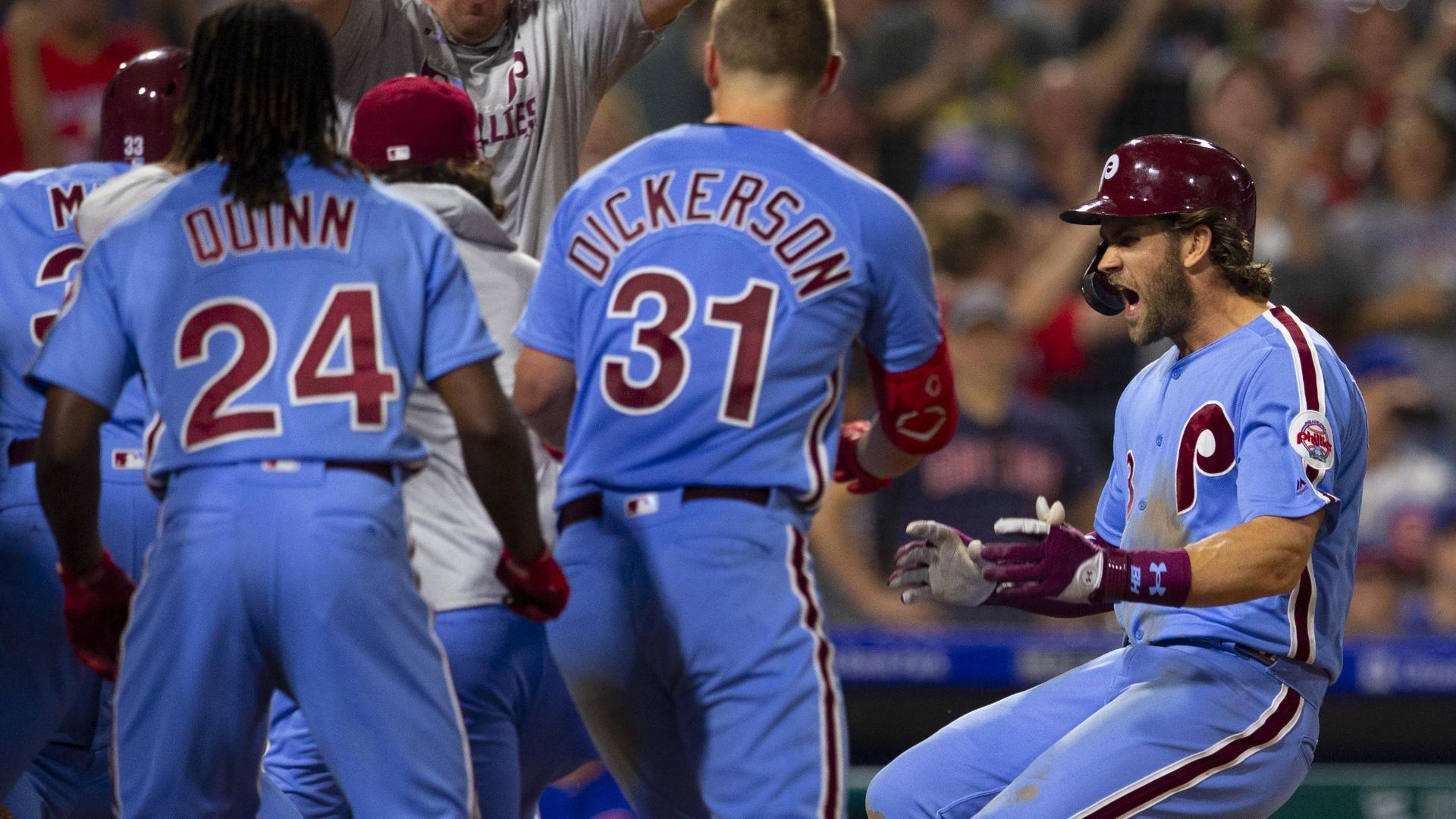 Phillies walk off on Harper's grand slam
Bryce Harper rips a grand slam out of the park to give the Phillies a 7-5 walk-off win over the Cubs. 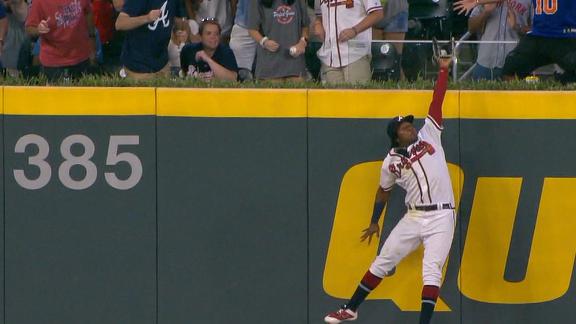