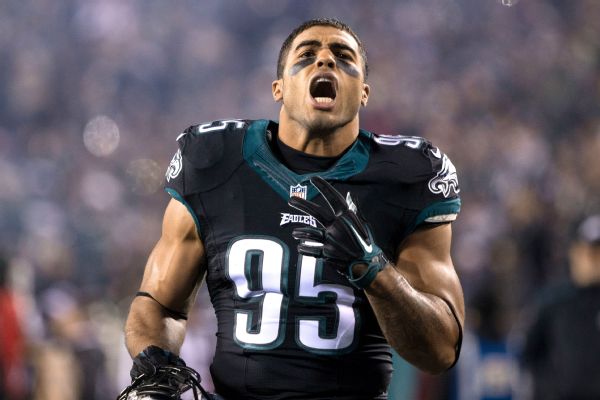 PHILADELPHIA -- Eagles linebacker Mychal Kendricks said he asked to be traded earlier this offseason, and was denied by the front office.

"Their response was you're young, you're talented and we're not into that. So I took it like that and was like, 'Alright.' That's why we have agents," said Kendricks at his locker stall following Friday's practice.

"That's the business. It's just like that. You tell them what you want, they either do it or they don't and you are in the contract that you signed. So that's it."

The former second-round pick out of Cal was used sparingly last season under new defensive coordinator Jim Schwartz. Part of the issue is that blitzing is among Kendricks' top strengths, but Schwartz relies on his front four to generate pressure.

The Eagles were in sub-packages around 70 percent of the time last season. With Jordan Hicks and Nigel Bradham as the top linebackers, Kendricks was on the field for just 27 percent of the defensive snaps. He finished with 32 tackles and no sacks.

The trade buzz surrounding Kendricks has been at a steady hum for months now. Two teams circulating around the Kendricks camp near the time of the draft were the San Francisco 49ers and Atlanta Falcons. While a deal with the 49ers was reportedly close, nothing came to fruition.

That's not to say Kendricks won't be moved eventually.

The 46th overall pick back in 2012, Kendricks contributed immediately his rookie season and followed that up with 106 tackles, four sacks and three interceptions the following year -- his first under head coach Chip Kelly and Billy Davis. He missed seven games due to injury over the next two seasons and was leaned on less and less, his snap count percentage plummeting from 83 percent in 2013 to 52 percent in 2015. A freewheeling, athletically gifted player, one knock on Kendricks has been his propensity to freestyle too much, creating reliability issues.

In the right scheme he has value. As Kendricks pointed out, though, he's been through four defensive coordinators in five professional seasons. The scheme he currently finds himself in does not appear to be a fit.

In 2015 he signed a four-year, $29 million contract extension containing $16 million worth of guarantees instead of playing out his rookie deal and testing free agency. Asked if he would still agree to the deal knowing how things would turn out, Kendricks said: "I'm going to plead the fifth on that one."