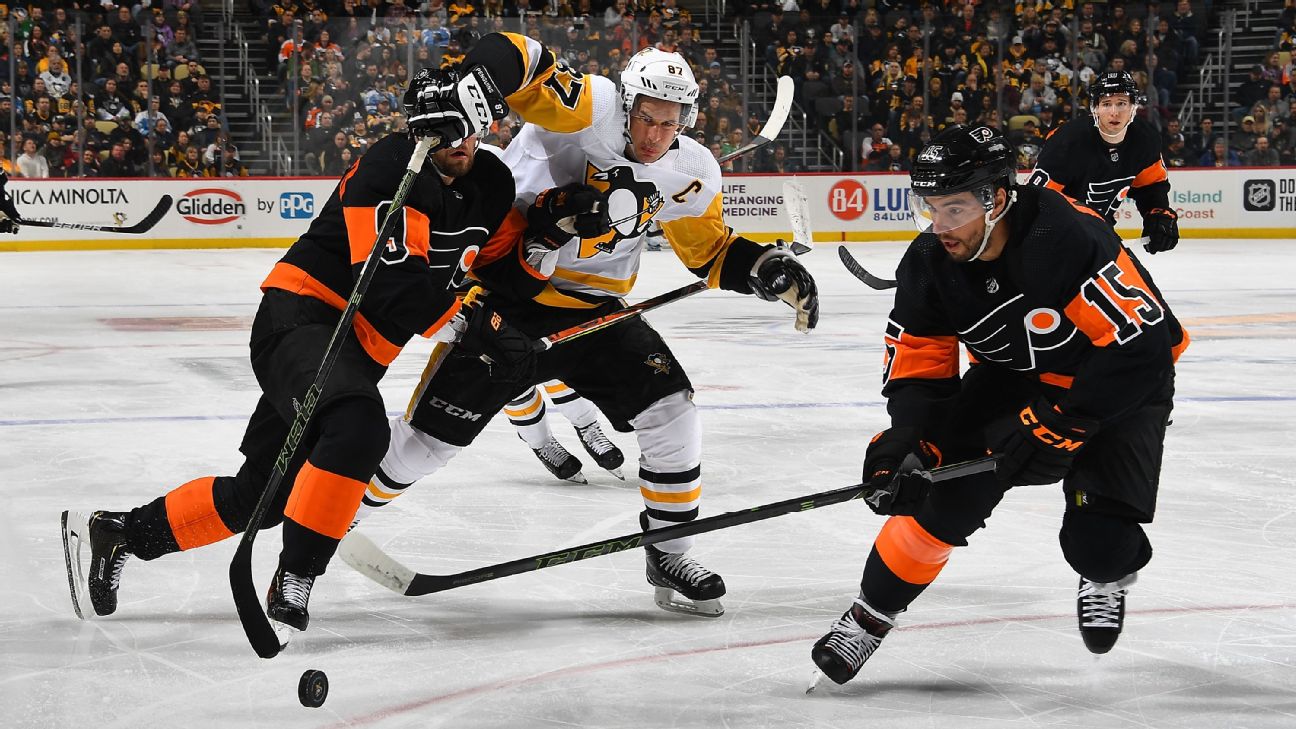 On Jan. 21, in their final game before the NHL's All-Star break, the Flyers hosted the Penguins -- and blanked them 3-0. It was a pretty dismal performance for the Penguins, who had just 19 shots on goal. It was a huge boost for the Flyers, who at that point were on the cusp of a playoff spot and had gone an impressive 9-2-3 against Metropolitan foes. The Penguins? Well, they had nine days to stew after that shutout in Philly, thanks to the break. On this night in Pittsburgh, they were looking for revenge.

Go here to watch a replay of the game, and follow along with our handy guide:

Best moments of the game

The pregame moment of silence for Kobe Bryant, his daughter Gianna and the seven others who died in a helicopter crash days earlier. The lights went out at PPG Paints Arena, and the scoreboard featured a purple-tinted photo of Bryant accompanied by the word "Legend." Sidney Crosby talked about Bryant a day earlier at practice. "I was shocked," the Penguins captain said. "I didn't believe it when I first heard it. I spent a lot of time trying to search and just find out if it was true. Once I found out it was true, it's just heartbreaking, for his family, for all of the families involved. He inspired so many people. He's a legend. You see the reaction and what he meant to people around the world. We've seen that over the last few days with the reaction. I feel for his family and all of the families. It's heartbreaking."

A unique look for Pittsburgh at home. The Flyers asked to wear their third jerseys in this game, which meant the Penguins sported their white jerseys at home. That doesn't happen very often, but when it does, it looks sharp.

Slick play by Niskanen. Watch the work by Matt Niskanen on the Flyers' opening goal, with 29 seconds left in the first period. He slides from the point down to the right wing and works a pass through at least two Penguins so Jakub Voracek has what amounts to a layup on the power play.

Both of the Penguins' power-play goals in the second period are beauties. The first one is a tic-tac-toe passing sequence (aided by a few conveniently angled skates) that forces Flyers goalie Brian Elliott to overcommit, leaving plenty of real estate for Bryan Rust. Less than six minutes later, the Penguins build a two-goal lead when Crosby's gorgeous East-West pass finds Kris Letang approaching from what feels like an impossible angle. Apparently, it wasn't!

Relentless Flyers. If you're someone who enjoys a well-executed forecheck (and who doesn't?), marvel away at the work Tyler Pitlick and Nicolas Aube-Kubel do on Pitlick's critical, second-period goal to cut the lead to 3-2. Of course, any forecheck is aided by a pedestrian clearing attempt like the one Letang made that led to that goal. Ouch.

Laughton is ignited. Scott Laughton's game-tying goal early in the third period, which erased a two-goal deficit, got him back on track. At this point in the game, Flyers coach Alain Vigneault was switching up his lines trying to find a spark. Laughton was out there with Pitlick and Kevin Hayes. On this play, Hayes spun around and put it on net, and it's Laughton with the tip-in. Entering the game, Laughton had just one point (a goal) in his previous 10 games, but this game was the catalyst for a nice second-half run: He had seven goals and 16 points in the 19 games that followed before the NHL went on pause.

Sidney Crosby, C, Pittsburgh Penguins: Since he entered the league in 2004-05, Crosby has haunted every other NHL team. But he has done his most damage against the Flyers. Entering this game, Crosby had 102 points in 69 career games against Philadelphia. Let's just say he did some more damage in this one.

Justin Schultz, D, Pittsburgh Penguins: The Penguins have been wounded all season. At the time of this game, the Pens had 213 man-games lost to injury. But they get an important piece back in this game. Schultz returns after a six-week (17-game) absence. It hasn't been the smoothest season for Schultz, but the Pens hoped he would get back on track in this game. He was mostly paired with Chad Ruhwedelbut got time on the power play as well.

Brian Elliott, G, Philadelphia Flyers: Carter Hart was sidelined by an abdominal strain, meaning the 34-year-old Elliott got the start for Philly. He was shellacked by the Penguins on Oct. 29 in their first meeting this season. He was relieved after allowing six goals on 28 shots through two periods in an eventual 7-1 Penguins win. The Flyers' defense stepped up with a smothering effort in that Jan. 21 game, giving him a much easier win.

Vigneault is a notoriously snappy dresser, but honestly, we're not feeling this ensemble. The suit's great. The shirt pops. But the tie gets swallowed up in that sea of blue. Contrast is king! Mike Sullivan looks good in his grey suit, lavender shirt and purple tie ... until that Letang turnover leads to the Flyers' second goal. They cut to Sullivan on the bench, and it's rather clear that his tie is about two inches too long because it's basically pointed in two different directions. For remaining dapper in the face of adversity, we'll go with AV here.

It's the NHL debut of Penguins forward Anthony Angello, the pride of Manlius, New York!

With 19:07 left in the second period, we get a cameo from the Angello family, who are in the stands to watch their guy make the show at 23 years old. We have Mom, Dad, an aunt wearing Anthony's Cornell jersey, two sisters (one of whom made the trip from Alabama) and a grandparent-aged woman wearing Anthony's Omaha Lancers USHL sweater. He doesn't score in this game, but he did get his first NHL goal and point on Feb. 18 against the Maple Leafs. Fun fact: Angello is the fifth Penguin to wear No. 57, and what a random collection this is: Chris Ferraro, Shawn Heins (No. 57 ... get it?), Marcel Goc and David Perron, the last player before Angello to wear the number in 2015-16.

Runner-up: The two rows of people downing beverages in full-body penguin suits (complete with bowties) when Crosby scores the winner.

Other highlights and lowlights:

Lingering questions after this game