Novak Djokovic moves on despite fall 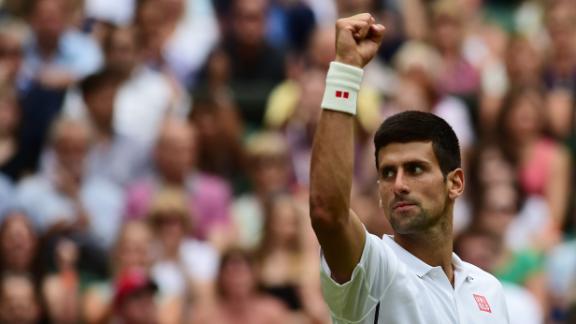 LONDON -- Top-seeded Novak Djokovic overcame a hard fall in the third set to advance to the fourth round of Wimbledon with a 6-4, 6-2, 6-4 Centre Court win over Gilles Simon on Friday.

Leading 3-2 in the third set and with Simon serving, Djokovic lunged for a forehand shot and fell hard to the grass, rolling over and grabbing his upper-left arm and grimacing in pain.

But after receiving medical treatment, he recovered to play out the match. He broke Simon's serve in the final game, his seventh break in the match.

"It was a sharp pain," Djokovic said. "It was an awkward fall. I was just hoping there is nothing really bad with the joint. Luckily there is nothing damaged. I could play. Just the muscle was quite sore because of the impact. All in all, I'm just glad to get through."

Djokovic will play Jo-Wilfried Tsonga, who beat Jimmy Wang of Taiwan 6-2, 6-2, 7-5, in the fourth round. Including rain delays, Tsonga has played on all five days of the tournament.

"There is two days off, I'm going to try to recover and get ready," Djokovic said.

Anderson, who won 10 of the last 11 games, is the first South African to advance to the fourth round at Wimbledon since Wayne Ferreira in 2000. He's reached the fourth round of his past three Grand Slams.

Hewitt broke the Open era record for the most five-set matches played at Grand Slam tournaments. The loss to Janowicz was his 42nd five-set match, breaking the mark of 41 he had shared with Andre Agassi.

"I'd much rather win in three or four sets than go the distance all the time," Hewitt said about the record. "I seem to put everyone through the wringer quite a bit."

Hewitt, who was playing in his 61st Grand Slam tournament, gave a wave to the crowd at the end of the match and hinted at retirement during his post-match conference.

"You never know," he said. "I'm one injury away from hanging up the bats at any time."

Later Friday, defending champion Andy Murray took a 15-match winning streak at the All England Club into the third round against 27th-seeded Roberto Bautista Agut of Spain.

Murray won six matches in a row at the venue to earn a gold medal at the 2012 London Olympics, then seven in a row during Wimbledon last year en route to the title, plus another two so far this week.

Djokovic Survives Injury Scare, Advances
Novak Djokovic fell and appeared to injure his shoulder in the third set, but he recovered to beat Gilles Simon in straight sets.