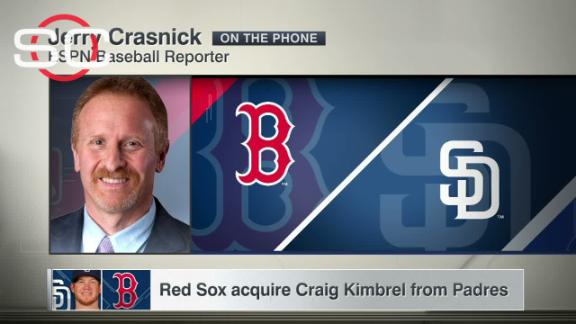 Kimbrel, who saved 39 games for the Padres this season, spent the first five years of his career with the Atlanta Braves before they traded him to San Diego on the eve of the 2015 regular season. The Red Sox assumed $25 million remaining on Kimbrel's contract but have him under control for up to three more seasons.

"Moving to the American League, I'm excited," Kimbrel said during a conference call. "It's a league that has the big bats. And being a pitcher, you want a challenge of facing the big bats."

The Padres received outfielder Manuel Margot, infielders Javier Guerra and Carlos Asuaje, and left-hander Logan Allen. Only Asuaje and Margot made it as high as Double-A last season.

"We didn't give anything up at the major league level to affect our club this year," Dombrowski said. "It's good talent. Some of it's a while away."

He recorded his 200th save in his 318th game, the fastest in major league history.

"There are various names out there, but [he's] one of the best in baseball," Dombrowski said. "We look for him to be our guy back there for years to come."

Dombrowski does not shy away from making trades, whether to build for the future or improve his current roster. His moves have included a December 2007 trade that sent 22-year-old Andrew Miller, Cameron Maybin and four others to the Marlins for Dontrelle Willis and Miguel Cabrera; the December 2009 trade that sent Curtis Granderson (28 at the time) to theNew York Yankeesand Edwin Jackson (26) to the Arizona Diamondbacks in a three-team deal for Phil Coke, Austin Jackson, Max Scherzer and Daniel Schlereth; and the July 2014 trade of Austin Jackson (27) to the Seattle Mariners and Drew Smyly and Willy Adames to the Tampa Bay Rays in the three-team deal that netted David Price.

He also was responsible for trading Randy Johnson to the Mariners (1989), Trevor Hoffman to the Padres (1993), Edgar Renteria to the St. Louis Cardinals (1998) and Johan Santana to the Minnesota Twins (1999).

San Diego finished fourth in the National League West last season despite a roster makeover by general manager A.J. Preller. He said trading Kimbrel for young -- and inexpensive -- players gives him the payroll flexibility that could allow the Padres to get back into the free-agent market.

It also will give them depth.

"I think when you're trading a player of Craig's caliber, I think we knew we needed quality and quantity. So I want to say all four guys are important to us," Preller said. "To really get to a championship level, you've got to have depth, you've got to have numbers and you've got to be strong up the middle."

With the acquisition of Kimbrel, Boston will move Koji Uehara into the eighth-inning role. Junichi Tazawa will handle the seventh.

Uehara emerged as the closer in Boston's 2013 World Series championship run. But he started and ended last season on the disabled list, finishing his year Aug. 7 with a broken right wrist.

Dombrowski said manager John Farrell spoke to Uehara and the pitcher was willing to do whatever the ballclub wanted.

"John Farrell thought he would be fine, knowing the type of individual he is," Dombrowski said. "He said he just wanted to pitch in the World Series again."

Margot split the season between Class A and Double-A, hitting .276 with 27 doubles, nine triples, six home runs, 50 RBIs and 73 runs. Guerra, 20, was named the Red Sox minor league defensive player of the year at Class A Greenville.

Allen, 18, was an eighth-round draft pick who split time between Boston's rookie-level affiliate and Class A Lowell. He posted a combined 1.11 ERA with 26 strikeouts and only one walk in eight starts between the Gulf Coast League Red Sox and Lowell.