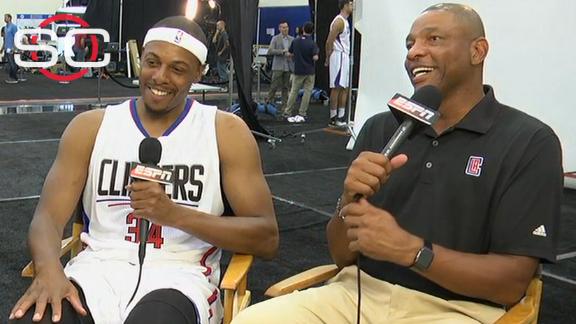 PLAYA VISTA, Calif. -- Paul Pierce says his 18th professional season will be his last if his new team, the Los Angeles Clippers, wins the 2016 NBA championship next June.

"If we win this year -- win a championship -- I'll probably be done with basketball, just to be honest," Pierce said at Clippers media day Friday. "It would be a dream -- to be home, to be able to carry the championship trophy down Manchester Boulevard -- it would be a dream come true. I'm excited for this moment."

Though championship parades in Los Angeles tend to follow a route several miles north of Pierce's choice of Manchester Boulevard through his native Inglewood, the veteran forward emphasized that his intangible contributions to the Clippers will be as valuable as any on-court production.

Pierce performed that function in Washington last season with theWizards, but opted this offseason to sign a three-year, $10 million contract in Los Angeles to reunitewith Doc Rivers, his coach in Boston, where the two won a title together in 2008.

Rivers said on Friday he hadn't decided whether Pierce would start at the small forward spot. Newcomers Lance Stephenson or Josh Smith are also candidates for the position. For his part, Pierce said he has no expectations as to his specific role in the rotation, especially at age 38.

"I'm not the player I used to be," Pierce said. "I know my minutes are going to be down. So I think the idea is to be able to get through the season injury-free and hopefully just be fresh for the playoffs come April, May, possibly June. That's when I want to be at my best to help this team. So whether [Rivers] plays me as a starter, or plays me off the bench, whether he plays me 15, 16 minutes, I'm willing to take on any role, as long as we win a lot of games."

After 15 consecutive seasons with theCeltics, Pierce will suit up in October for his third new team in as many opening nights. He said that even as an NBA elder, there'sstill a getting-to-know-you process when arriving in a new locker room.