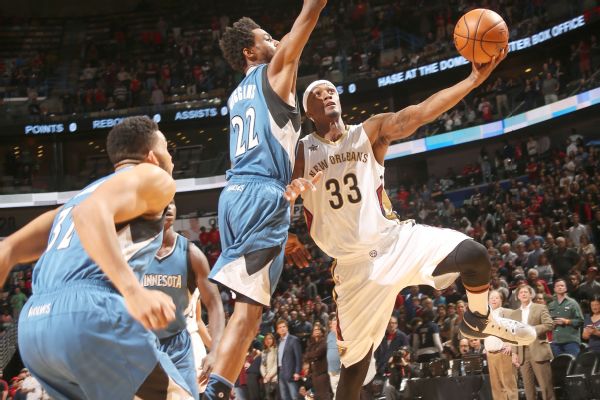 Pelicans forward Dante Cunningham is expected to miss the next 4-6 weeks with a fractured right fibula.

Cunningham suffered the injury -- a nondisplaced proximal fibula fracture, according to a team release -- in the second quarter of the Pelicans' 117-96 victory Wednesday over the Minnesota Timberwolves. Team officials initially said he had a knee bruise.

The 29-year-old is averaging 5.6 points and 3.9 rebounds in 15 games, including 10 starts, this season. A career 29.1 percent 3-point shooter, Cunningham is averaging 41 percent on 2.6 attempts per game from behind the 3-point line.

The Pelicans are in the midst of a four-game winning streak with guard Jrue Holiday back in the lineup. Tyreke Evans has returned to noncontact action in practice and could rejoin the team in the near future after nine months of rehab after a third right-knee surgery in the span of nine months.
Related topics:
sportsespnjrue holidaydante cunninghamtyreke evansnbanew orleans pelicans
Copyright © 2021 ESPN Internet Ventures. All rights reserved.
More Videos
From CNN Newsource affiliates
TOP STORIES