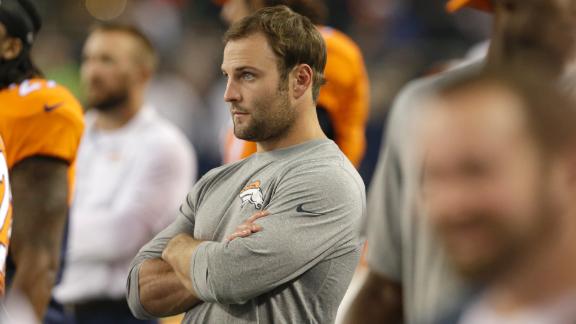 ENGLEWOOD, Colo. -- Denver Broncos quarterback Peyton Manning expressed hope Wednesday that negotiations between the NFL and NFL Players Association would result in approval of a new drug policy, clearing the way for wide receiver Wes Welker's reinstatement as soon as this week.

Welker was suspended for four games for violating the league's policy on performance-enhancing drugs and served the first game of the suspension Sunday. Broncos officials and players believe a new policy would change the criteria of Welker's suspension and allow for his reinstatement.

"It's hard to say. We've tried to stay abreast of what's going on," Manning said after Wednesday's practice. "I've been in contact with Wes. I know he's chomping at the bit to get back. I know he's here in town. Obviously it would be great to get him back. We'll just see how the process, see how it all shakes out."

The Broncos have prepared for the possibility. Since releasing wide receiver Nathan Palmer on Tuesday, the Broncos have kept their roster at 52 players to allow for a potential move of Welker from reserve/suspended to the roster if a new policy is put into place.

"We had the call [with NFLPA officials] last night. Didn't get the news that we wanted, but something was going on today," Manning said. "Jacob Tamme was on the call, along with Von [Miller], so talked to them this morning. It would be great if they got it resolved today and we got Wes back."

Last week, NFLPA executive director DeMaurice Smith addressed the possibility that a new drug policy could lead to reinstatement for Welker and Cleveland Browns wide receiver Josh Gordon. In an interview with 106.7 The Fan in Washington, D.C., where the NFLPA's executive offices are located, Smith said players who were recently suspended under the current rules should have their punishments revised and revoked.

"If we get a deal done that covers players in this league year, I don't like that we punish players under a deal active in the old league year," Smith said. "We don't want players to suffer because the union and the league couldn't get it done before the league year."

Welker's suspension, for amphetamines, falls under the league's current policy for performance-enhancing drugs. Under the guidelines for PEDs, players are suspended for the first flagged positive test. Team officials believe under the proposed new drug policy those stimulants would be characterized under the league's rules for substance abuse.

Under those guidelines, a player enters the treatment program with the first positive test -- a program that includes meeting with counselors -- and the player is subject to increased testing each month. It takes multiple positive tests under the substance-abuse policy before reaching the suspension phase.

Broncos coach John Fox took a somewhat measured approach when asked after Wednesday's practice if he had hope Welker would be reinstated.

"I don't really spend much time thinking about it," Fox said. "That's a union and a league deal. We've got plenty of people involved in that. Whatever decision is made we'll move forward. At this point, that's all speculation. We're excited to get Wes back when that is."

Welker, who cannot attend meetings or work out at the Broncos complex while under a PED suspension, is currently eligible to be reinstated to the team Oct. 6 and could play in the Oct. 12 game against the New York Jets.