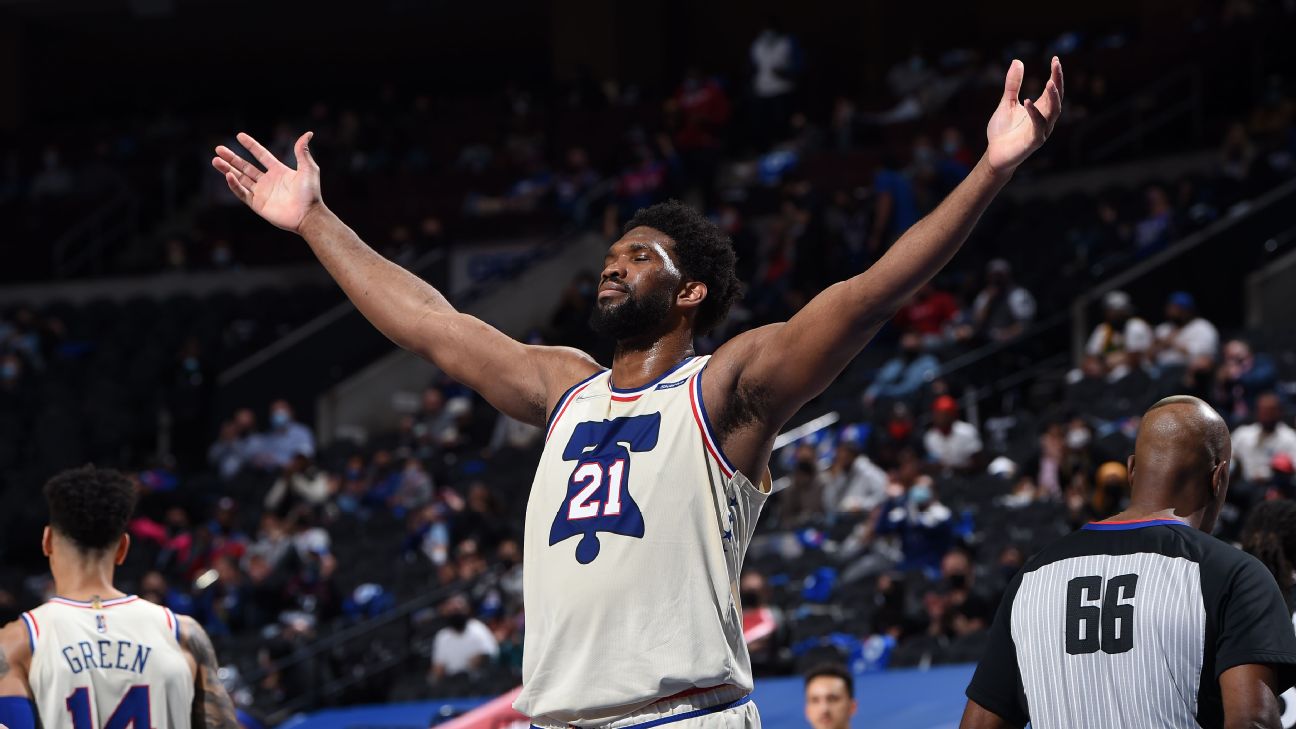 Before the Philadelphia 76ers squared off with the Brooklyn Nets Wednesday night to see who would end up atop the Eastern Conference at the end of the night, Sixers coach Doc Rivers was asked whether he has made getting the top seed in the East a priority for his team this season.

"We really haven't talked about it a lot," Rivers said. "We're just talking about winning games."


Then, the truth came out.

"It clearly would be nice to have," he said.

There's no mistaking the significance of Philadelphia's 123-117 victory over the shorthanded Nets Wednesday night -- one that firmly put the Sixers in the driver's seat to claim that top spot in the Eastern Conference.

Philadelphia made it far more difficult than it needed to be to get that win, nearly blowing a 22-point lead with eight minutes to go before hanging on to win against Brooklyn's reserves, but ultimately the Sixers got the win -- one that moved them a game ahead of the Nets with 17 games remaining for both teams. It also clinched the season series for Philadelphia, which turns that one-game edge into a two-game advantage.

"We made a bunch of mistakes," saidJoel Embiid, who had his latest dominant performance of the season with 39 points, 13 rebounds and two blocked shots in 33 minutes. "We turned the ball over defensively. We didn't have the focus we had all night. That can't happen if we're a team that wants to compete for a championship."

Frustrations about the ending aside, the Sixers got what they wanted. And, coupled with the Nets dealing with an assortment of injuries and also facing a far more difficult remaining schedule (fourth-hardest) than the Sixers (seventh-easiest), the path is now officially clear for Philadelphia to control its destiny in the East.

"[It's] very important," Ben Simmons said. "We want that one seed."

The most significant reason is because of the far simpler path it carves out to escape the East -- something the Sixers are hoping to do for the first time in 20 years. With three elite teams in the East -- Philadelphia, Brooklyn and the Milwaukee Bucks-- holding that top seed means only having to beat one of those teams to reach the NBA Finals.


And, when facing them, it would also mean having homecourt advantage in the Eastern Conference finals. Conversely, finishing second or third likely means having to take down two of the top teams to make it to the Finals, with either one or both series coming without homecourt advantage.

But, for this Philadelphia team specifically, there is an added significance to holding that homecourt advantage: The Sixers play better at home than any team in the league.

Since Embiid and Simmons began playing together in the 2017-18 season, the Sixers have gone 111-28 -- a 79.9% winning percentage -- in games at Philadelphia's Wells Fargo Center.

The league's next-best team over that timeframe, the Denver Nuggets, have won just over 75% of their home games -- and have the benefit of playing those games at a higher altitude.

"When you play in Philly, [the fans are] gonna push you," Embiid said. "They're gonna get on you. They're gonna boo you. You got to come out and give 110 percent and just play very hard and give them everything you've got. I feel like since I've been here in Philly, that's played a huge role in how dominant we've been at home."

And while Philadelphia's voracious fans have undoubtedly played a role in that success -- and have clearly fueled Embiid, in particular, who has always fed off their energy -- the Sixers have still been an Eastern Conference-leading team at 23-5 this season at home, even with those fans largely being kept away from the building.

"I think we're comfortable at home," Rivers said. "I guess it's surprising this year without the fans. I can understand with the fans, but without the fans we've had a lot of success, as well."


That success continued Wednesday night -- though it's hard to take much away from a game that saw Kevin Durant, James Harden, LaMarcus Aldridge and Blake Griffin all in street clothes for Brooklyn. Kyrie Irving (37 points on 13-for-21 shooting, plus 9 assists) was brilliant, and DeAndre Jordan played as well as could possibly be expected against Embiid.

Embiid was dominant, and continued his season-long parade to the foul line by going 10-for-11 from the charity stripe. It was a reminder both of how dominant Embiid has been against everyone when he's been on the court this season, and how he is perfectly suited to attack Brooklyn's soft underbelly defensively.

But Embiid, for as good as he's been, isn't the only thing driving Philadelphia's success -- and wasn't the only person driving it Wednesday night. Tobias Harris had another high-impact, high-efficiency game (26 points on 11-for-17 shooting), both of which have been constants from him in what has easily been his best NBA season. Simmons remains one of the league's elite defenders and Seth Curry and Danny Green have provided everything Philadelphia hoped they would in swapping Josh Richardson and Al Horford for them, respectively, in the off-season.

As a result, that five-man unit is now 20-4 this season after Wednesday's win, and has outscored its opponents by 14 points per 100 possessions in close to 500 minutes on the court. Meanwhile, George Hill-- the team's key trade deadline pickup -- still hasn't played due to a broken bone in his hand suffered before the deal was made.

All of that gives Philadelphia the confidence it can finally break through and return to the league's championship round. It took a significant step toward that goal Wednesday night.

"We just have to handle our business night-in and night-out," Harris said. "We have to be ready for the challenge every single night." 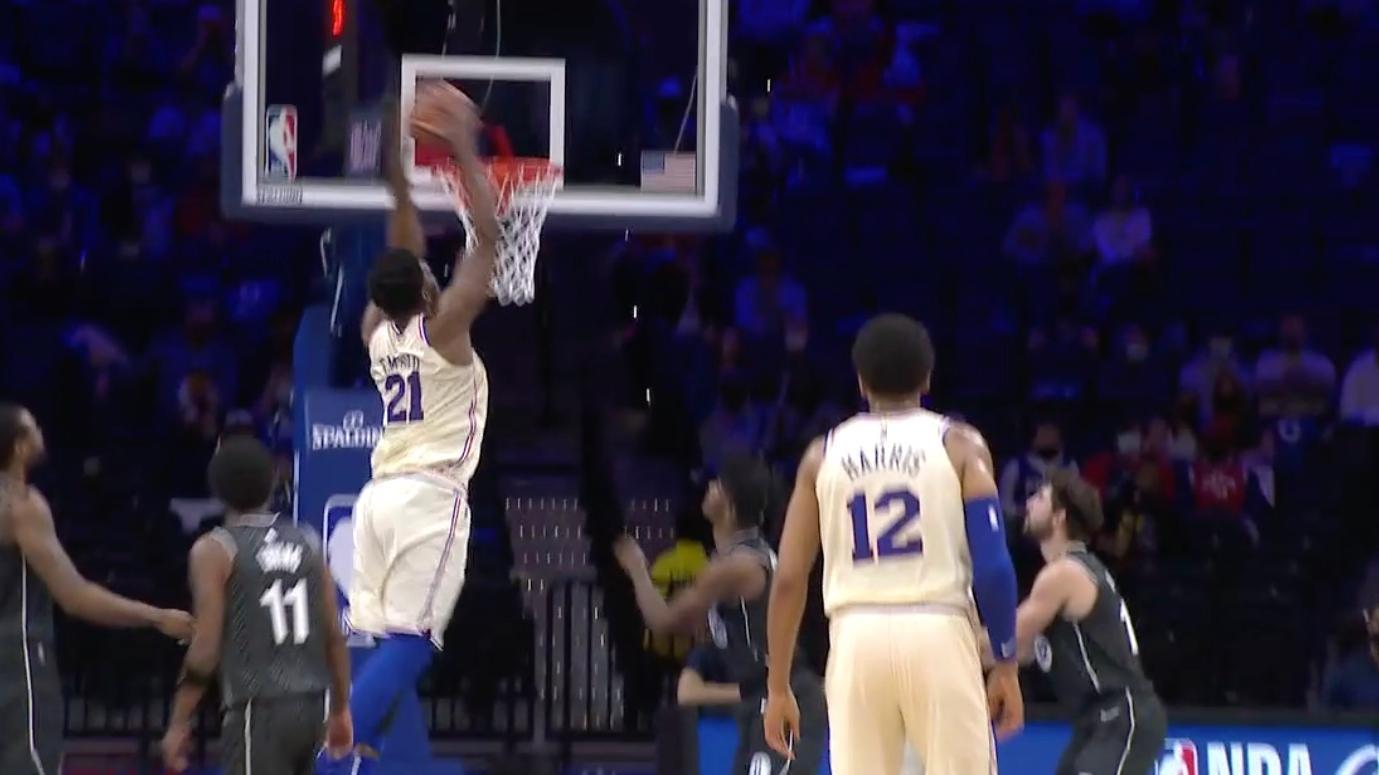 Embiid fakes defender for big finish at the rim
Joel Embiid uses a shot fake to shed his defender, then hurries to the basket to flush a two-handed dunk for the Sixers. 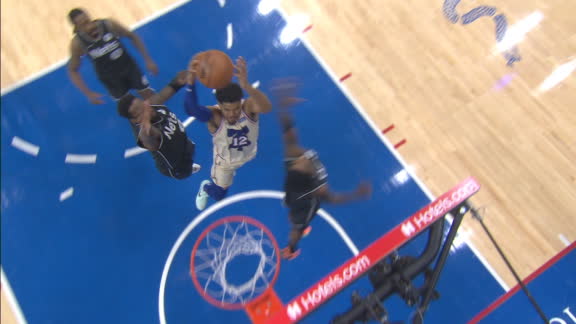