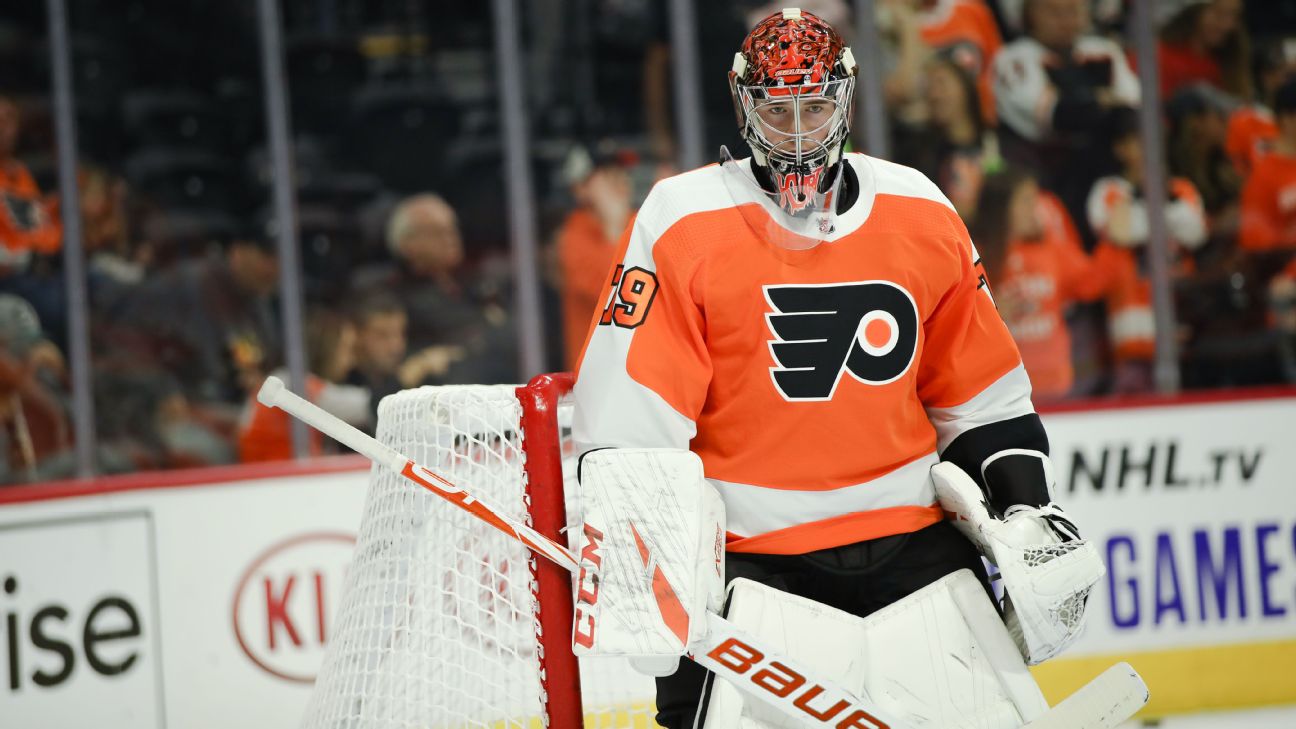 The Flyers think they've got their long-term answer in the crease with Carter Hart, but many questions abound elsewhere, including how new coach Alain Vigneault will line up the roster -- and whether GM Chuck Fletcher has any more big moves up his sleeve. Here's everything you need to know about the Flyers heading into the 2019-20 NHL season:

The big question: Have the Flyers finally figured out the goaltending?

The Flyers were one of the league's biggest disappointments in 2018-19, and a lot of the blame fell on the cast of rotating goaltenders (rightfully so). No team should have to cycle through eight netminders in a season. Of course that masked other issues, like slumping seasons for several players and an overall leaky defense. The blue line did play with more structure and confidence when Hart finally got in net.

GM Chuck Fletcher says he expects a 70-30 split between Hart and Brian Elliott; it's unclear who gets the larger load just yet. But Hart, the vaunted prospect, finally gets his chance to show he can be the true No. 1. Does that mean a decades-long problem is finally solved?

Vigneault came in to turn things around for the underachieving group; Vigneault's teams historically play an uptempo style. It's also Fletcher's first full season as GM.

The Flyers have a top-10 power play. Yeah, it's a little hot-takey considering Philadelphia had the ninth-worst man advantage unit last season. With their personnel, it shouldn't be nearly as bad this season, and a rebound campaign fromShayne Gostisbeherecould be the catalyst to get things going. Plus, let's remember that the Flyers had the third-worst shooting percentage of any team at 5-on-4 last season; these things tend to even out.

The Swedish winger seemed to be in Dave Hakstol's doghouse to begin 2018-19. When the coach was fired, Lindblom blossomed (13 goals over the final 36 games) while getting bigger opportunities. The 2014 fifth-round pick should take the next step, especially if he gets to play with talented linemates.

The top six. So you think Hayes is overpaid? He probably is. But Hayes' presence as the No. 2 center alleviates some pressure from Patrick, and allows Claude Giroux to slide back to winger and team up with Sean Couturier as a lethal top-line pairing. With the ascending Travis Konecny, Jakub Voracek and James van Riemsdyk, it's a dynamic six-man unit -- and makes up for a less-than-stellar bottom six.

Uncertainty. Through camp, too many questions lingered in position battles, and we don't know how this roster will respond to the new coaching staff as well as a new system. It's also unclear if the new additions are a significant upgrade (especially on the blue line) or just different faces.

Pressed into duty a year earlier than anticipated, Hart answered the bell. He'll come in as the Flyers' full-time starter this season at age 21 with a solid team in front of him. The sky is the limit for fantasy, but there is a floor here that could prove to be detrimental if things don't go as planned. Seven goaltenders have played 60-plus games at 21 or younger, and few of those have done it with great success.

I made a promise not to hype up Ivan Provorov this season if he didn't become a fantasy star last season, so I won't do that. I want to. I mean, no Flyers defenseman did anything to write home about last season and Provorov was given zero offensive opportunities to follow up on his 17-goal campaign. But I won't do it.