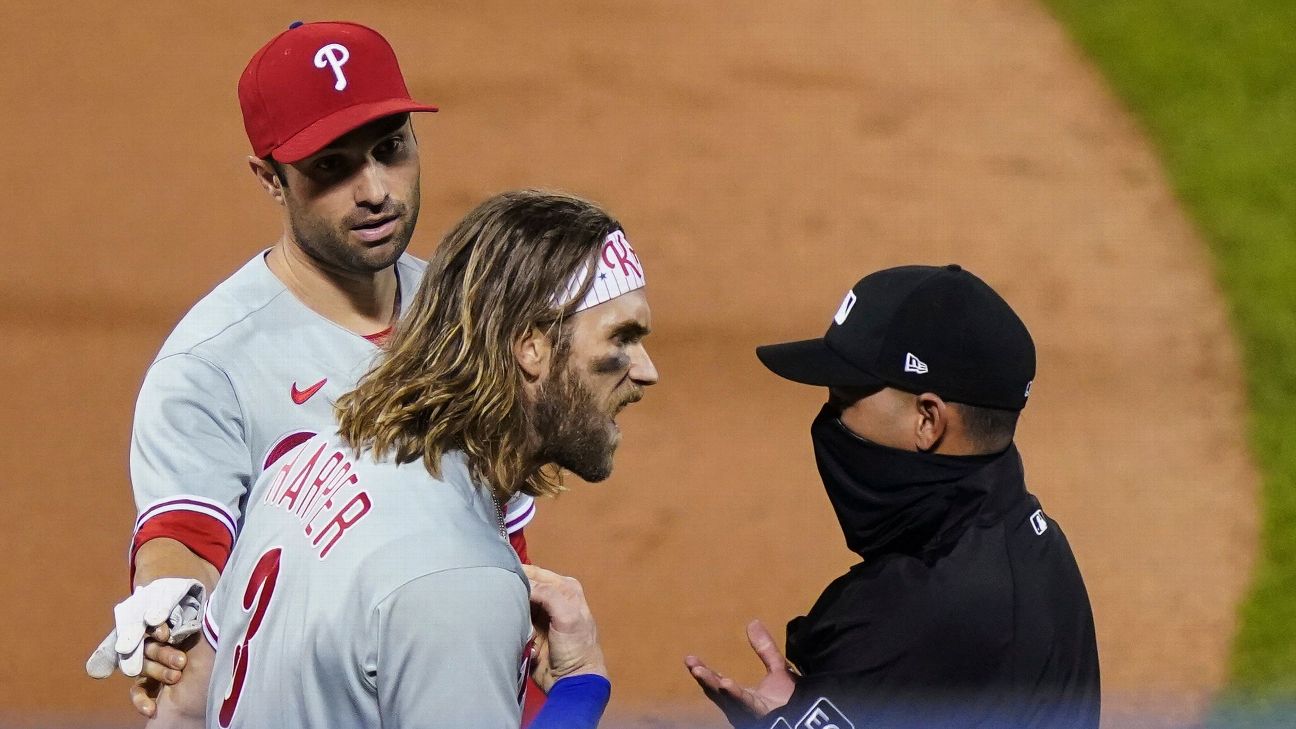 NEW YORK -- Philadelphia Phillies star Bryce Harper was ejected for arguing with first-base umpire Roberto Ortiz over a fair-foul call Saturday night in a game against the New York Mets.

In the fifth inning Harper ripped a first-pitch curveball from starter Seth Lugodown the first-base line. Ortiz ruled the ball was foul, and Harper put his hands on his head as he glared down the line before resuming the at-bat at Citi Field.


After grounding to third for the final out of the inning, Harper began arguing with Ortiz. Phillies second baseman Neil Walker tried to restrain Harper, and Ortiz warned Philadelphia's $330 million slugger multiple times to stop before signaling his ejection.

Harper then got in Ortiz's face and began yelling at the 35-year-old umpire -- an apparent violation of Major League Baseball's safety protocols during this pandemic-shortened season. Walker and first base coach Paco Figueroa tried to hold Harper back, and manager Joe Girardi also came out to help usher Harper off the field.

Harper said he asked Ortiz for clarification on the call as he passed by heading toward right field and that Ortiz quickly became confrontational.

"I don't understand why it turned or what I did where he was very upset with me," Harper said. "Neil Walker was standing right there with me the whole time. I said, 'I'm not even mad. I just want to know why he's so upset and why he's getting mad and talking to me like I'm a 5-year-old.'

"I said, 'All I wanted to know was what you saw, and that's it.' And then I said, 'Just be professional, please,' and then that's when he banged me."

"I was not upset about the play call, at all," Harper said.

The strong-armed Harper looked on as Walker caught the ball on his heels and delivered an off-balance, wild throw home that let Frazier score easily. Walker shook his head at Harper after the play and appeared to explain to teammates in the dugout during the next inning that he was waiting for Harper to call him off the ball.

Harper acknowledged after the game that he should have called Walker off.


"If Harp can get there, that's a ball where outfielder has priority and has a better chance of keeping the runner at third base," Girardi said. "Bryce didn't call it, so Walk had to catch it."

"I think he's really frustrated," Girardi said. "And it happens. It's human nature when you're so competitive and you expect to do so well, frustration is going to settle in. It did tonight, and we lost him for the rest of the game."

Philadelphia also finished without outfielders Roman Quinn and Jay Bruce. Quinn replaced Harper in the lineup but crashed into the center-field wall an inning later chasing a fly ball. He was placed in concussion protocol.

Bruce was pulled in the seventh inning after reaggravating a left quadriceps injury, and Girardi thinks the veteran left fielder is likely headed back to the injured list. 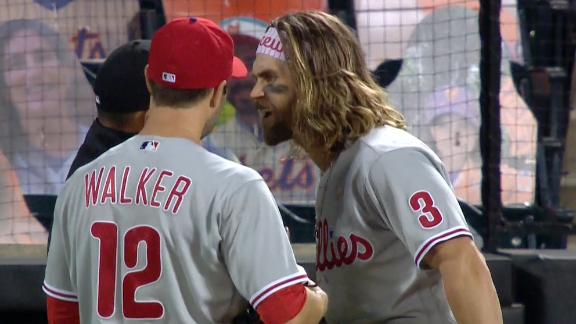