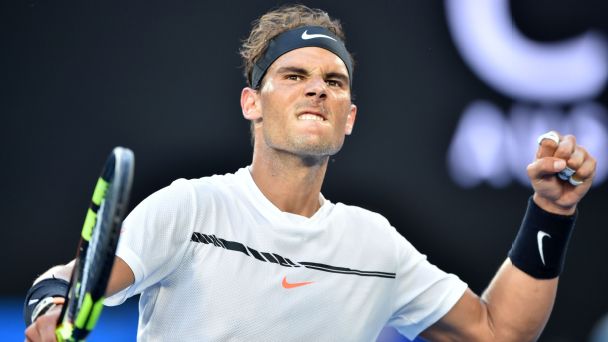 MELBOURNE, Australia -- For several years now, Alexander "Sascha" Zverev has been touted as the dazzling future of tennis.

On Saturday at the Australian Open, the gangly 19-year-old from Hamburg, Germany, demonstrated that he is on the very cusp of that predicted greatness.

But not quite there yet.

The match required 4 hours, 6 minutes and midway through the final set leg cramps appeared to afflict Zverev, who called for the ATP World Tour trainer, and limit his effectiveness.

How did he beat Zverev?

"Fighting," Rafa said in his on-court interview. "And running a lot.

"Everybody knows how good Alexander is. He's the future of our sport, and the present also."

Zverev, who stroked 74 unforced errors, failed to advance to the second week of a major for the first time. But, certainly, it's only a matter of time, perhaps as soon as the French Open later this year.

This was a classic battle between a 30-year-old champion and a gifted teenager with similar aspirations of greatness. The two had a singular history going back to last year's event at Indian Wells. Zverev had a match point against Nadal, but eventually lost a grinding three-set match.

This match underlined just how close Zverev is -- and how far the 6-foot-6, 189-pound player has to go to beat a legend in the crucible of a Grand Slam.

Down the stretch, Zverev's verve and nerve left him, resulting in a double fault, a loose forehand or two and a general lack of focus. When his legs started to go, it was all over.

Nadal, now 30, is in comeback mode yet again. A wrist injury forced him to withdraw from last year's French Open after a second-round win and he missed Wimbledon.

Clearly, he is not the player he once was. The No. 9 seed lost the crucial third-set tiebreaker when he was overpowered by a massive Zverev backhand winner and struggled at times on his service games.

But here's the good news: After going six consecutive Grand Slam matches with a defeat in which he dropped the first set, Nadal scored an impressive comeback. For someone who needs match wins to build confidence, this was an important match.

Losing the third-set tiebreaker, Nadal said, provided him with the critical mass to turn the match around.

"After that, I said, I need to fight for every point -- forget about the result," Nadal said.

"I see that he suffered a lot. Sometimes you get cramps because you are tired a little bit, and sometimes because of nerves."

No one has ever accused Nadal of lacking nerve. At a precarious time in his career, all those exuberant scissor kicks and upper cuts he displayed against Zverev should sustain him going forward.

Denis Istomin has followed his upset win over defending champion Novak Djokovic with a 6-4, 4-6, 6-4, 4-6, 6-2 win over Pablo Carreno Busta, reaching the fourth round.

On Thursday, Istoman, a wild-card entry from Uzbekistan, became the lowest-ranked player -- at 117 -- to beat a second-seeded player at the Australian Open.

Istoman beat Djokovic on the main Rod Laver Arena, but his match Saturday was on the much lower-profile Show Court 2.

Istomin will next play the winner of a night match between Grigor Dimitrov and Richard Gasquet.

The 37-year-old Karlovic's win in the first round set an endurance record -- the 84 games in the win over Horacio Zeballos, which ended 22-20 in the fifth, was an Open-era mark for the tournament.