Real or not? Late-game failures add to Phillies' fade 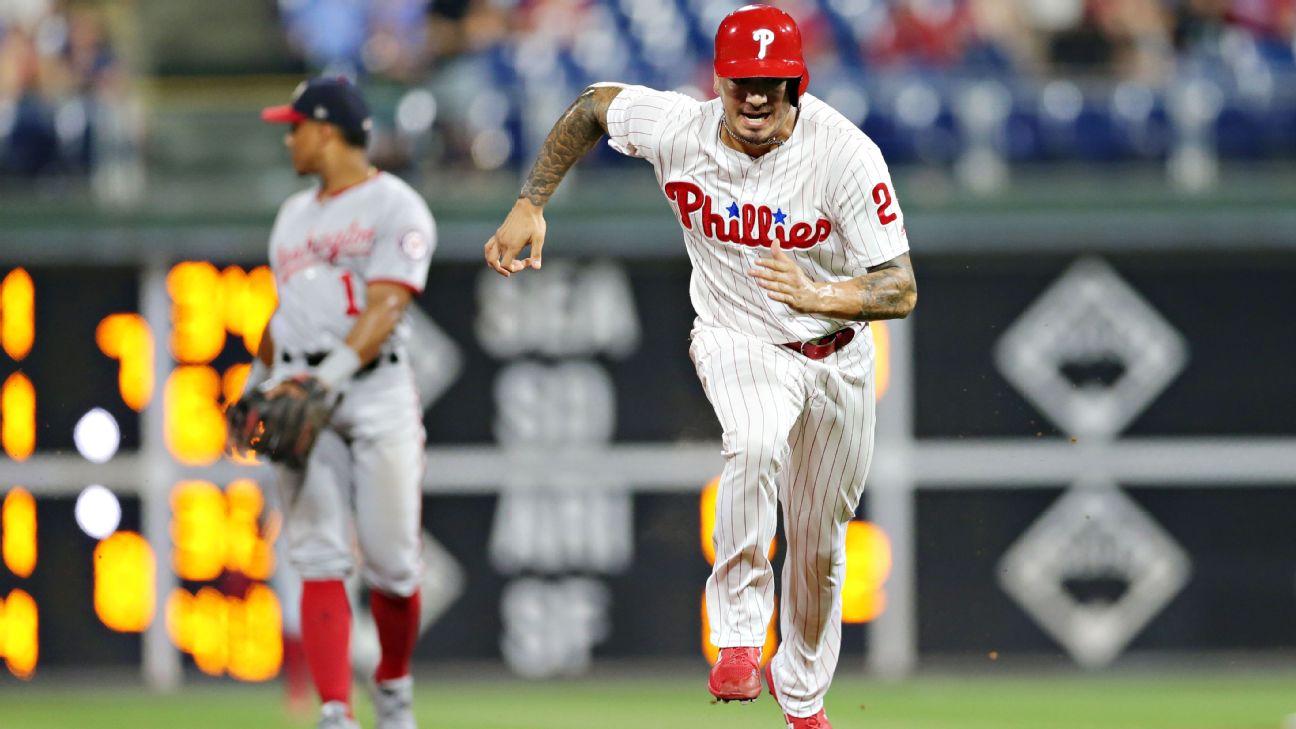 This was one of the best nights of the season. The action was so rapid-fire across the league it was almost impossible to keep up on everything, with more twists and turns than an HBO miniseries. I'm here to serve you, dear readers, so don't worry, I've reviewed an amazing night of baseball to bring you the important highlights.

Get the fork ready for the Phillies: This game had a little bit of everything. Aaron Nola dueling Max Scherzer, a couple home runs off Scherzer to stake the Philadelphia Phillies to a 3-0 lead over the Washington Nationals, another brutal collapse by the Phillies' bullpen, and then a gut punch in the bottom of the ninth when the final out came with a pitcher pinch-running at second base leaving second base too early on a fly ball.

The game started with seven terrific innings from Nola. He beat Scherzer last week and it appeared that he would beat him again as he took a shutout into the seventh. He gave up two runs -- one unearned run -- but still left with a 3-2 lead. Phillies manager Gabe Kapler, who has tried everybody except Gene Garber and Al Holland in the late innings of late, brought in Tommy Hunter to face Bryce Harper. Harper walked. Kapler brought in Pat Neshek. Anthony Rendon did this:

The Nationals added another run when Ryan Zimmerman stole third and Jorge Alfaro chucked the ball into left field. So now it's 5-3. The Phillies rally and it's 5-4 after Wilson Ramos hits an RBI double. Ramos is slow, so Kapler wisely sends in a pinch-runner -- pitcher Vince Velasquez. Fly ball to center, Velasquez tags and reaches third base ... only to be called out for leaving early upon replay review. This wasn't just a punch to the gut, it was a George Foreman-in-his-prime punch to the gut.

Of course, Phillies fans are used to these losses. That's five games they've lost despite leading after eight innings and they've lost eight games they led after seven. Combined with the Atlanta Braves' 9-5 win over Tampa Bay -- the Braves scored four in the bottom of the eighth to win that game -- the Phillies are now 4 games behind the Braves and trending in the wrong direction with eight losses in 10 games.

The postgame quotes tell you all you need to know:

Kapler wasn't quite so despondent, saying, "It's a super difficult loss to swallow. I don't worry about this group. They're tenacious and resilient." OK, but nothing rips apart a team more than those late-game bullpen losses, and the Phillies have had too many lately for a team in a tight playoff race. Kapler has tried everything -- nine different pitchers have saves for Philadelphia -- and the Phillies actually ranked ninth in the majors entering Tuesday in Win Probability Added by the bullpen, so the pen has had its moments this year. It just didn't have one when it needed one on Tuesday.

George Springer, meet Ramon Laureano: This was another A+ ballgame. It looked like Oakland Athletics manager Bob Melvin had made a huge blunder against the Houston Astros in the fifth inning. After Edwin Jackson walked Springer with two outs to load the bases, Melvin left in Jackson to face Alex Bregman, rather than go to his deep and stellar bullpen. Bregman doubled to tie the game and then Melvin pulled Jackson.

The play of the game came in the bottom of the eighth when Springer tried to go first to third on a base hit to center field with no outs. Laureano unleashed a monster throw:

Laureano made his debut on Aug. 3 and already has four assists (tied for most in the majors in that span), but look how far past second base Springer was when Laureano fielded the ball. And Springer isn't exactly Wilson Ramos. Laureano picked it up quickly, fired a low laser beam, and Matt Chapman made a great tag.

Then the A's won the game with a run in the ninth off Roberto Osuna, on Nick Martini's RBI double. Blake Treinen went 1-2-3 and the two teams play the rubber game of the series -- and their final regular-season game against each other -- on Wednesday. Given the bad news the A's received earlier in that day, with Sean Manaea out indefinitely and Brett Anderson landing on the disabled list as well, Laureano's throw and Martini's double provided a huge lift in a big game.

The Mets' ace allowed one run in eight innings, struck out 10 -- and left with a no-decision. (The game was suspended in the 10th inning with the score tied 1-1.) In 27 starts, deGrom has a 1.68 ERA ... and he's 8-8. He has now had eight starts in which he pitched at least seven innings, allowed no runs or one run, and didn't get the win. It has to be one of the hardest-luck seasons in a long time. Lucas Giolito, pitching on a worse team, has a 5.85 ERA -- and more wins. I'm not one of those anti-win guys. But cite them wisely. In deGrom's case, it's not a reason to disqualify him from the Cy Young race. In fact, he may now be the favorite. As ESPN's Ian O'Connor tweeted, "Been watching baseball in New York for nearly half a century. And it's been a true privilege to watch Jacob deGrom compete this year."

That was the 80th walk-off home run of the season across the majors, tying the most ever, a record set in 2004. There were 75 last season. The Cardinals lead with seven, giving them a chance at tying the single-season record of nine, set by the Cleveland Indians in 1995.

For a few moments, it appeared the Yankees would pick up a game on the Red Sox, as about the time Walker homered, the Marlins scored five runs in the eighth at Fenway to take a 6-4 lead. But the Red Sox followed up with three runs. Then the Marlins tied it in the top of the ninth. And then the Red Sox won in the bottom of the ninth, so their lead holds at 6 games and talk of a 1978-like collapse subsides at least for a day.

Cardinals continue to roll: The St. Louis Cardinals started August one game over .500. Now they're 16 games over .500 after beating the Pirates 5-2 behind another Jack Flaherty masterpiece. The rookie went 4-0 in five starts in August with a 1.13 ERA. According to Elias Sports Bureau research, he's just the fifth rookie starters in the past 30 seasons with at least four wins and a sub-1.20 ERA in a calendar month. Good job, kid.

Colorado Rockies 3, Los Angeles Angels 2: Good bounce-back W for the Rockies after a tough loss on Monday. Carlos Gonzalez hit a two-run homer in the first off Noe Ramirez, and if you're paying attention, you'll note that Ramirez picked up the save on Monday before starting Tuesday. It was that kind of night.

San Francisco Giants 1, Arizona Diamondbacks 0: The Giants shut out the D-backs for the second night in a row, winning on Gorkys Hernandez's pinch-hit walk-off single. Madison Bumgarner and Clay Buchholz both spun zeroes for seven innings. We now have a tie for first place in the NL West and the Dodgers are a game back. Are you ready for September?

Good dog: All that, and I didn't even get to the best highlight of the night. No, not Kenley Jansen's behind-the-back grab. This most excellent dog, from a minor league game: